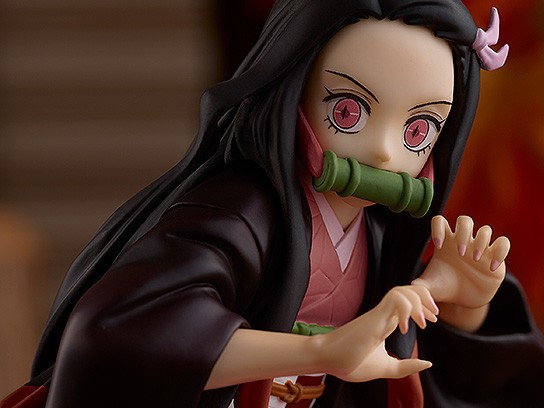 With so much happening with figurines this month, it’s no surprise Demon Slayer has had more than its fair share of exciting announcements. Earlier this week, Good Smile Company revealed the painted prototype and opened pre-orders for Pop Up Parade’s Nezuko Kamado figure. Nezuko joins the previously announced Tanjiro, Zenitsu, and Inosuke. While Tanjiro’s pre-orders closed mid-last month, the latter two have only had unpainted prototypes revealed. The figure designs are based on the anime’s key visual, revealed back in 2018.

Good Smile’s Pop Up Parade line kicked off in June 2019 with (and is it any surprise?) a Hatsune Miku figure. Over the last couple of years, the line has grown to include characters from popular anime and games such as MHA’s Torodoki and Uraraka and Persona 5’s Phantom Thieves. With figurine collecting a notoriously expensive hobby, the line aims to provide fans with high-quality figures at a reasonable price. All figures are 3900 yen (if you order through Good Smile), average 17-19 cm in height, and have a four month turn around from pre-order close to release.

Generally, this line is a ‘you pay for what you get’ situation. The detailing, size and paint of the figures can rival some high end companies, but the poses are often uninspired. Most figures seem to see characters standing straight up with different hand/arm poses.

Nezuko’s pose is based on a pre-existing visual so there may not have been much wiggle room in design, but her arms seem to just ‘hang there’ awkwardly. Both her and Zenitsu’s figures need each other and Tanjiro to ‘complete the look’. Thankfully, Inosuke seems to look good with or without the group.

While I definitely wouldn’t compare these figures to others double or triple their price (like the Kotobukiya ARTFX J series) the truth is fans of Demon Slayer are spoiled: there are tons of figures they can choose from. SEGA, in particular, has done exceedingly well with some great value Demon Slayer prize figures such as their SPM line and Premium Chokonose Figures (which are honestly ADORABLE). With this set, I can’t say Good Smile has made them unique enough to be ‘must haves’ for collectors.

Pre-orders for Pop Up Parade Nezuko close 11 March 2021 at 12:00 JST. The figure is set to release in June 2021. You can pre-order via the Good Smile Company website here.