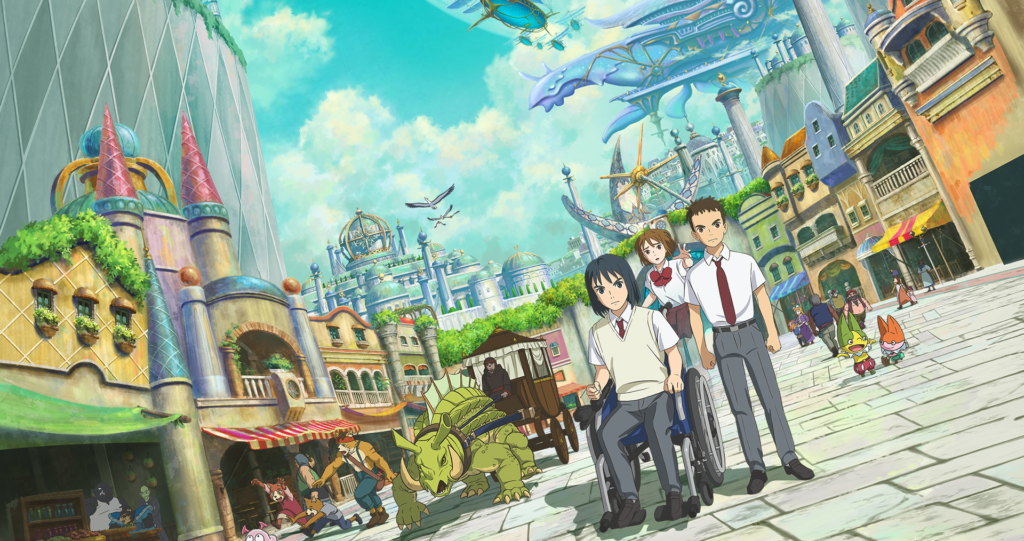 Ni No Kuni’s new movie is a film with an identity problem in a series with a massive identity crisis. It’s not the most positive way to start a review of a movie I was excited for, even if the news of a movie based on the Ni No Kuni series that felt a little lost ever since the departure of Studio Ghibli always did fill me with trepidation more than it did genuine excitement. Unfortunately, after watching it, I don’t think there’s a nicer way to describe the film than that. This movie isn’t terrible by any stretch, but it’s also a movie that has no idea what it wants to be or what it wants to say, leaving a muddled and confused mess in its place that I sit here unsure as to who, if anyone, I would recommend it to.

This movie is the third entry into the Ni No Kuni franchise (the fourth if you count the Japan-only Nintendo DS and PS3 versions of the original game as two separate entries), yet it’s almost unrecognizable compared to what the series initially set itself out to be. What initially started as a collaborative project between the genius minds at both Level 5 and Studio Ghibli, one which told a wonderfully heartfelt story of a child processing and overcoming grief in the messy is now a movie about a messy political drama predominantly led by Level 5, with animation not from Studio Ghibli but OLM Studio.

The film itself follows a group of three friends known as Yu, the wheelchair-bound Haru and Kotona who each live in modern-day Japan. An incident sees a mysterious figure from Ni No Kuni attack and stab Kotona, and after the other two were almost run over in their rapid attempts to take her to hospital the three of them are transported to the world of Ni No Kuni, with various incidents in each of the two worlds causing the friends to switch between the worlds of Ni No Kuni and the real world in order to save Kotona’s life and solve the ongoing political turmoil between warring kingdoms that is going on in the fantasy world whose consequences could alter the lives they enjoy in reality.

On the surface, there’s actually quite a few areas of this film I can praise, despite my overall view of the film. Many key creative figures who helped to create the world of Ni No Kuni have returned for the project, and their influence is not only felt but ends up feeling like a positive contribution to the final product. The most noticeable returning figure is Joe Hisaishi, who has returned to do the soundtrack for this film, providing emotional weight and strength to each piece of music created for the film. Also returning is former Ghibli staff member and long-time collaborator on the series Yoshiyuki Momose, who ended up being the film’s director, while Akihiro Hino, the CEO of Level 5 who has been involved with the series since the beginning as a writer, overseeing the project. With some strong emotional moments to be found when good directing, music and writing come together in just the right way, especially when we begin to learn more about the childhood of our main characters, each of them brings something to the film that helps the film overall. The animation, though not to the level of the animated scenes found in the original game by Studio Ghibli, ends up being strong overall as well, with some individual cuts, especially in the second half, being rather impressive, albeit dragged down by some disappointing uses of CG animation.

The issue, however, is that many of these elements, while individually impressive, never come together to create a satisfying whole. Without enough confidence to branch out in a brand new CG style more reminiscent of the look of the video games now that Studio Ghibli are no longer involved, departing from their trademark aesthetic to a new and unique visual design, the movie ends up being a clash of ideas as the creators attempt to recreate the design sensibilities found in Studio Ghibli’s work and the unavoidable influence of Makoto Shinkai’s recent films. Character designs are similar enough to the characters found in Shinkai’s work to evoke recognition, yet this works against the film when that style of character doesn’t fit in the world or story being told, distracting you to the point of constantly pulling you out of the action.

The film also has a massive tonal dissonance that serves as a barrier to your immersion into the film and its world. Many scenes from the film are either too serious for a joke to land or for the casual daily interactions or flirtatious advances of our main characters to feel authentic or natural, while other scenes that attempt to deliver serious expository dialogue or attempt to surprise the viewer with shocking new information never have their desired effect due to being unfocused. One particularly egregious example of the latter issue manifests in a bar scene early on in the film, where a resident of Ding Dong Dell attempts to explain to our characters and the viewer the current political situation of the world they live in while describing the city itself. Much of the conversation contains important expository information that we as a viewer need to know to understand the events that are to follow, yet the film is constantly between our characters while their conversation continues in and, strangely, a mostly naked pole dancer showcasing her talents on stage, something which feels very much out of place in what is supposed to be a kids film.

Perhaps worse than the tonal issues is the issue I brought up right at the beginning of this review, however: Ni No Kuni is a movie without an identity. 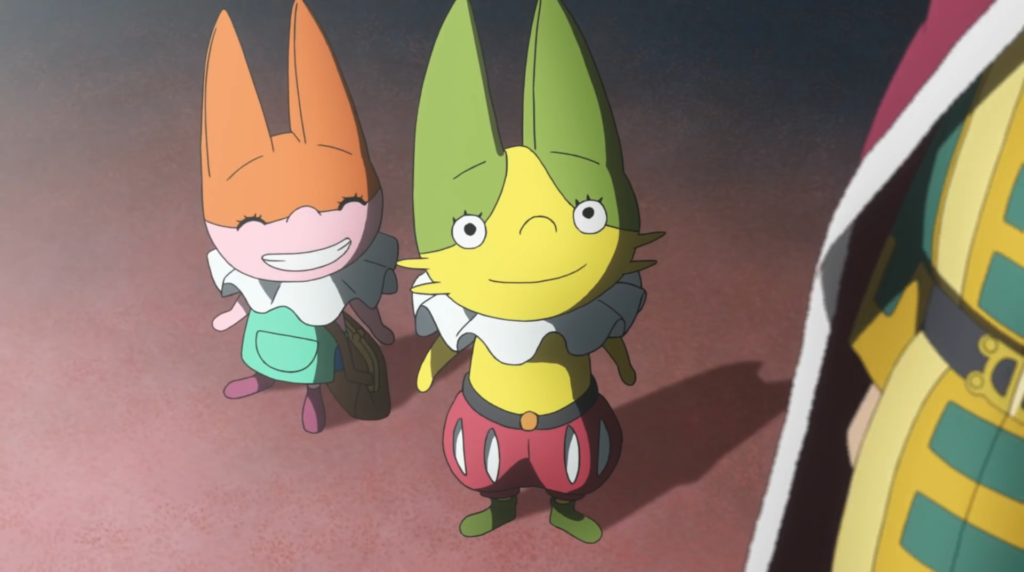 The issue I have with Ni No Kuni as a series is that I don’t feel like Level 5 understand what direction they have wanted to take the series in since the success of the initial game and departure of Studio Ghibli. Their rather strange decisions regarding the IP ever since that title have left me questioning whether the company understands what the first game was even saying at all, and what it was about that game that people like me fell in love with in the first place

In that very first game in the Ni No Kuni series, the fact that there were two worlds was perhaps the least important thing about that game. While both the real world which Oliver, a young boy dealing with the loss of his mother, lived in and the fantasy world were both established early on and were important to the overall plot, the story remained the story of Oliver no matter what. In many ways, the original game in the series captured what Studio Ghibli is able to do best, by using the fantastical other to tell a very human and personal story. Oliver is unable to accept the fact that his mother dies and blames himself for causing it, traveling to the other world with hopes of saving her. Throughout his journey he’s forced to confront the realities of his current situation, helping him to come to terms with what has happened. The multiple worlds and fantasy elements of the story all serve the sole purpose of helping Oliver come to terms with his mother’s loss.

To me, and many of the people who played the original game, they may have initially become interested in Ni No Kuni thanks to Studio Ghibli’s involvement, but they fell in love with it thanks to Studio Ghibli’s influence. The team at Ghibli had some influence over the game’s story alongside created animated scenes for the title, allowing the company’s ability to tell human stories to shine and enhance the world that had been established. 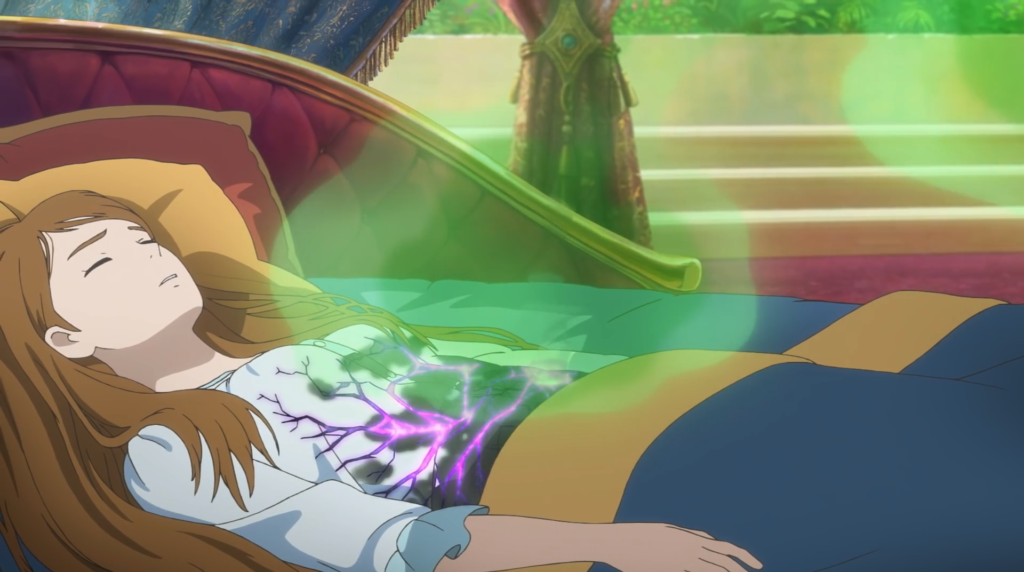 When it comes to this movie, it feels as though the world is more important than its characters, which was never the case in the original game. For a story about two boys trying to save their friend, the movie focuses very little on the relationships and personalities of our three main characters, with the story becoming bogged down in a political drama between warring factions with a painfully obvious plot twist that, as a viewer, we’re not given a reason to care for. When the film does focus on our main characters, such as the flashback scenes that develop Yu and Haru’s friendship, and the animation, music, and writing complement each other as they do in this scene, we’re given what are easily the film’s best moments, moments that remind me why I fell in love with the original Ni No Kuni and remind me why I was still wanting to see this film despite my uncertainties prior to its release. These moments are too few and too far between, however.

Ni No Kuni for me has always been a human story told through its fantasy setting, not a fantasy story, yet this film never commits to either of these things. It begins to tell a human story, then disregards it for a warring kingdoms fantasy epic, one which is left feeling shallow because it hasn’t been given time to develop and one which clumsily tries to shoehorn a conclusion in its loose threads when it realizes it forgot what it was originally trying to say. 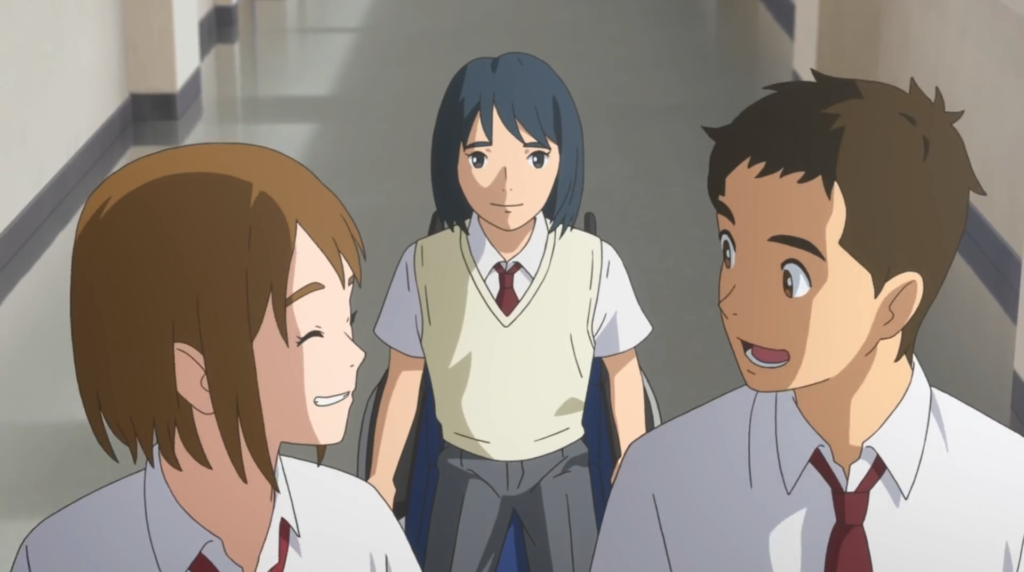 So what are we left with? Ni No Kuni is a film that has long since abandoned its roots and now doesn’t know what story it wants to tell. Much of this film felt it was going through the motions as it attempted to work out if it wanted to tell a fantasy story or a romance story or a story of friendship. This film no doubt has its positive moments, with some strong animation and another wonderful Joe Hisaishi score pulsating throughout its too-long 2-hour runtime, yet overall the movie feels lost and confused, diluting its message and lacking an identity. While I’m often able to recommend movies that I don’t enjoy to the right person, I left this film wondering if even the creative minds behind this film knew who they were making this for… and I’m still wondering now.

Ni No Kuni is now showing in Japanese cinemas, and you can find more info on this film over on the official website.