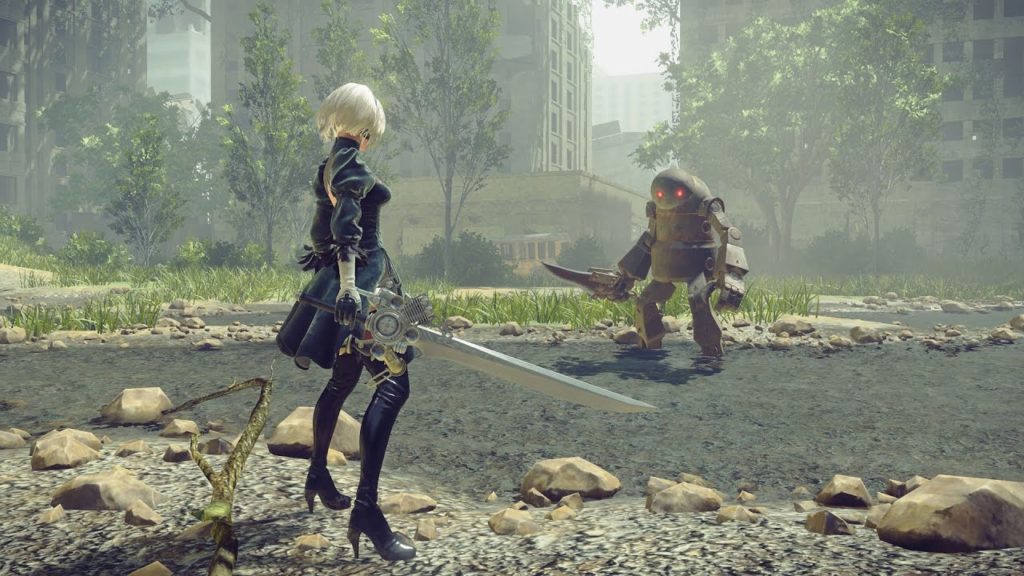 As an action role-playing hack and slash game developed by PlatinumGames and published by Square Enix, NieR Automata is one of the greatest games ever created. “Why?” you might ask, and I’m going to outline some of the reasons why as well as tell you all a little bit about the game and what makes it tick.

But first, let’s give you a quick run-down of the story and how NieR Automata came to be. What makes the game so good? I personally have my own opinions on this, and for me there is a definitive deciding factor as to why I think this is one of if not THE best game ever created.

A Broken World – How NieR Automata came to be

NieR Automata started development in 2014 with series creator Yoko Taro, producer Yoko Taro, and lead composer Keiichi Okabe as the first true successor to the original Nier on the PlayStation 3 and Xbox 360. The game is a spin-off of the “Drakengard” series of games. As the original Nier was developed by Cavia and NieR Automata being developed by PlatinumGames, this style of project was new to PlatinumGames and the staff faced many challenges with development such as its style of gameplay and its open-world environment.

Since its release, it was welcomed with critical acclaim and reviews praising the game’s narrative, characterization, depth, music, combat, and complete mixture of genres. Fun fact, the game was originally supposed to be a “Farmville” style game for mobile or PS Vita.

Thankfully, this didn’t happen. The game was officially announced in 2015 at E3 in Los Angeles under the name “Nier New Project” while the official name was kept a secret still. This is because Yoko Taro wanted to name the game Nier: Android, but aside from the fact that it would have ruined the game’s plot, it also could have also raised a legal issue with Google’s “android” platform.

YoRHa Rising – The Characters and Setting of NieR Automata

The setting and characters in NieR Automata are definitely the major selling points of the game. The game shares the same post-apocalyptic setting of the original Nier, which takes place after the game’s fourth ending, but that’s about it.

NieR Automata takes place in the year 1194AD where there is a “Proxy War” going on between the human-made androids and an army of machines from another world. The game takes place in 3 parts, each with their own endings, and each played with a different character. The main character of Part 1 is “YoRHa No.2 Type-B” who we have come to know and love, and I really mean love, as “2B”, a battle android who is calm and composed.

Part Two’s main character is the ever-lovable “9S” a male “scanner” android who seems to have more emotion than that of other YoRHa units. The last of the playable characters is “A2” an obsolete android who prefers to work on its own. The antagonists of the story are “Adam” and “Eve”, humanoid machines who murdered their alien creators.

After the game’s release, there was a DLC titled “3C3C1D119440927” which features additional costumes, three new battle colosseums which also include boss fights with the CEOs of Square Enix and PlatinumGames, Yosuke Matsuda and Kenichi Sato.

The audio version of a one-night stand that you wished never ended. – The Sounds of NieR Automata

Notice that there is a period at the end of the title of this section. That is there on purpose. That purpose is to drive this point home and why I think this game is as good as it is.

The soundtrack for NieR Automata is amazing. It’s orgasmic. It’s refreshing. It’s pure. It’s wholesome. It’s everything right with the world in a world where there is nothing right.

Through my MULTIPLE playthroughs of NieR Automata, thanks to its 26 endings, I continuously found myself mesmerized by the music of the game. The songs never get old, stale, or repetitive. They match the world perfectly and set a very fitting tone for the game. This is thanks to none other than composer Keiichi Okabe who worked on both Nier and Drakengard 3 and his band Monaca.

The soundtrack draws influences from classical music while assimilating other elements from the previous Nier game. Singers Emi Evans and series new-comer J’Nique Nicole lent their voices to the Japanese and English version of the theme song with Evans contributing more vocals to the game’s overall soundtrack as well.

The Multiple Endings of NieR Automata

NieR Automata has a total of 26 endings. There are a total of 5 true endings and 21 more or less fake endings. Endings A through E are considered Good endings allow you to save your game and proceed to unlock endings, whereas endings F through Z are considered Bad endings and do not allow the player to save their game after completing the ending and will return the player to the title screen after the ending plays.

Here is a quick rundown on how to get each ending for the game.

Ending A: flowers for m[A]chines – Complete the game for the first time with completing all Main Story Quests.

Ending B: or not to [B]e – Load the game which has Ending A obtained and play through the game clearing all Main Story Quests again.

Ending C: meaningless [C]ode – Load the game with endings A and B completed and clear all of the Main Story Quests again, for the last boss battle, choose A2.

Ending D: chil[D]hood’s end – During your third playthrough, choose 9S for the final boss battle. When prompted to go with or stay either choice will be fine. Choosing either results in the ending being displayed however the difficulty between the two and the contents of the mission will be different.

Ending E – the [E]nd of yorha – During the credit scene, you will be prompted by Pod 153 to perform a data check. If you choose to do this, and after a brief exchange between both pods, you will be asked once more. If you accept the option that you “wish for them to survive” you will play a shooting mini-game. Complete this minigame to unlock the ending.

If you fail multiple times you will be asked if you want help as long as you’re connected to the PSN. Accepting the help will make the section extremely easy to complete however you will be required to delete your save file. This includes all other save files for NieR Automata as you will become one of the helpers instead.

Ending F: mission [F]ailed – Chapter 01-03_2 – After Engels knocks 9S onto his back, let the timer run out and do not repair your system.

Ending G: hun[G]ry for knowledge – Chapter 01-01_2 – When you gain control of 9S for the first mission walk to the crane and ignore the mission.

Ending H: a mountain too [H]igh – Chapter 05-02 – Disregard the order to intercept the Goliath’s attack on the city and abandon the mission.

Ending J: bad [J]udgement – Chapter 09-01_3 – Kill any of the machines when entering the factory.

Ending K: aji wo [K]utta – Chapter 06-01 – After you give your report to the commander, you’ll get an email titled “Jackass: Fish”. Talk to the commander at the Desert Camp and eat the Mackerel you receive.

Ending S: city e[S]cape – Chapter 17-01 – Abandon Popola and Devlola after they try to protect you while trying to access the tower.

Ending U: deb[U]nked – Chapter 06-01 – Self-destruct yourself while in the bunker.

Ending V: reckless bra[V]ery – Chapter 17-01 – Fight alongside Popola and Devola instead of hacking the tower when trying to gain access to it.

Ending X: time to rela[X] – Chapter 11-06 – Run away when the game switches you to A2 once reaching the commercial facility as virus-infected 2B.

Ending Y: head[Y] battle – Allow Emil to self-destruct at the end of the boss fight during the quest “Emil’s Determination.”

Ending Z: over[Z]ealous – Chapter 14-01 – Choose to kill Pascal after saving him once leaving the desert.

Keep the Cover Over Your Eyes or Take it Off?

NieR Automata is a fantastic game with a fantastic story and an even more fantastic soundtrack. But does that mean that the game is for everyone? Absolutely not. I’m to this day still working on unlocking all of the endings and finding new things in the game each time I pick it up.

Sometimes I will just get lost in the soundtrack and stare aimlessly at my screen until a few minutes later when I realize that I got completely entranced by it yet again. It really is that good. I can’t praise the soundtrack enough for how much it adds to the game.

It’s not just a game that you can pick up and get immediately invested into. It takes some time. But if you allow yourself to get sucked into its overwhelming synopsis, character development, and soundtrack, you will most likely be extremely pleased and keep going back for more.