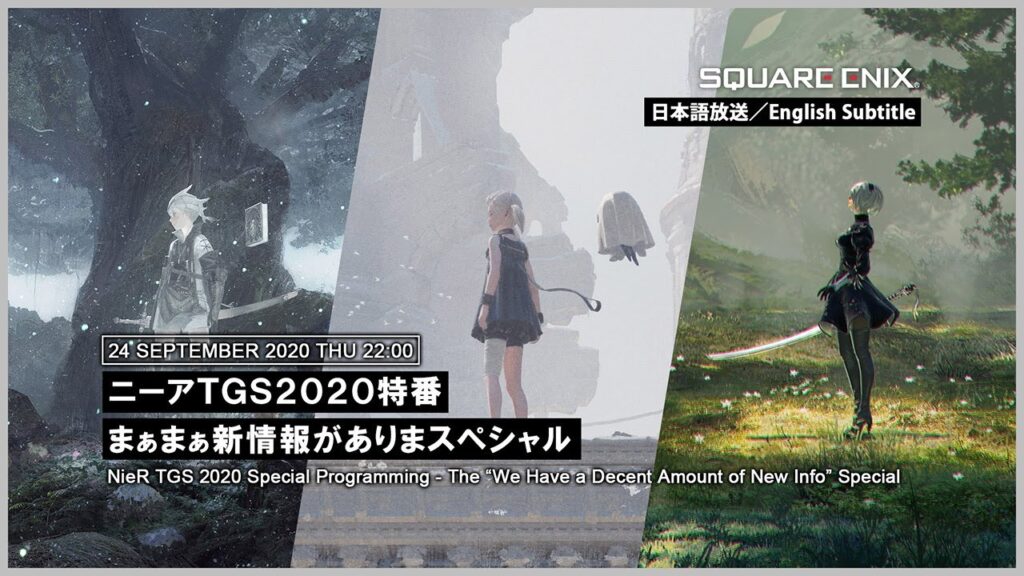 The rise of NieR from an over-looked Drakengard spin-off in 2010 to one of NieR’s flagship JRPG series at the end of the decade is a remarkable one, and it’s no surprise Square Enix want to capitalize on this success. Since NieR Automata’s incredible success, a remaster of the original NieR, titled NieR Replicant ver. 1.22474487139 and a mobile titled NieR Reincarnation are in development. With both games well into development and after a recent mobile beta for Reincarnation, we’ve been anticipating an update on these titles, with TGS Online 2020 being chosen as the venue to unveil new information about the NieR franchise.

Welcome to NieR TGS 2020 Special Programming – The ‘We Have A Decent Bit of New Info’ Special!

Taking up the ‘stage’ for this event was Grimoire Weiss voice actor Hiroki Yasumoto, producer Yosuke Saito, composer Keiichi Okabe and, of course, series creator Yoko Taro. Although, after the brief introductions, he left his Emil head on his seat to talk from off-stage, with Yasamoto controlling a ‘Yoko Taro puppet’ that took on the form of Taro’s disembodied voice.

Kicking off this TGS Online 2020 event was a new, albeit brief, look at NieR Replicant. This short new trailer includes a brand new arrangement for Kaine’s theme which is beautiful to hear and worthy of a trailer in its own right, but much of the footage shown is familiar to anyone who saw the original trailer that confirmed the game’s existence. It’s even structured the same. Still artwork of brother NieR, Kaine, Emil and Yonah are broken up by shots of empty remastered environments familiar to those who played the original, but little else was shown.

Although the trailer lacked gameplay, that didn’t mean there was nothing to show! Saki Ito, game director for the remake, came on stage to showcase footage from a debug build of the game. After launching us into the Northern Plains, we saw some basic battles against shades, where we got to see just how the team at Toylogic planned to update the gameplay of the original title.

To speed up battles, magic such as the Magic Lance can be used in the air, parrying is faster, and overall attacks are performed faster than before. Still, the core button-mashing gameplay loop is kept intact, with these changes designed to refine, not overhaul, the original title. 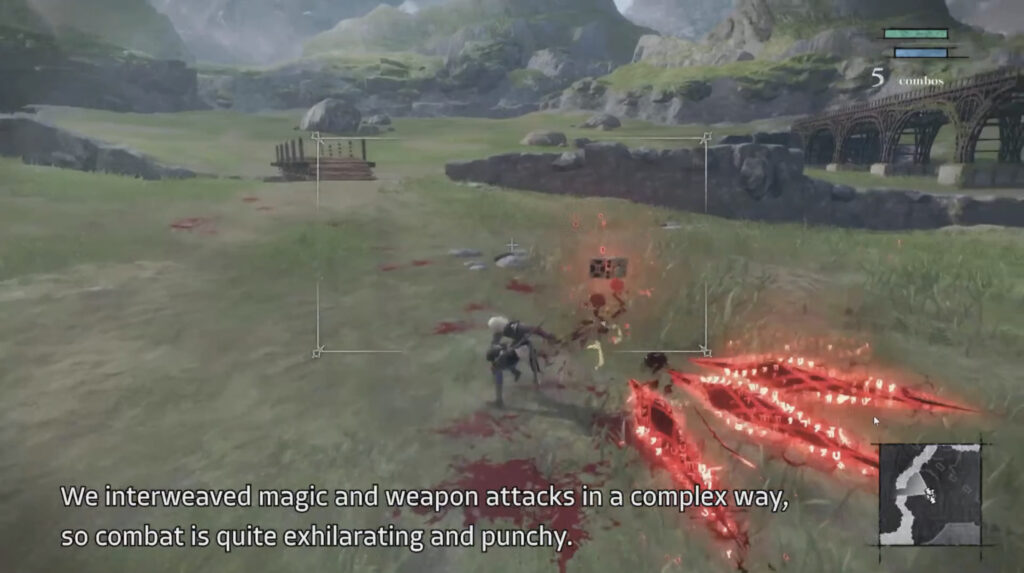 NieR Replicant ver. 1.22474487139 will release on April 22nd in Japan, the anniversary of the original title’s release in 2010, and internationally on the 23rd for Xbox One and PS4. As of now, no next-gen versions have been announced despite the game’s release after the launch of the PS5 and Xbox Series X. The title will also launch on Steam worldwide on April 24th.

Artwork by Akihiko Yoshida will be used for the Japanese release while different art by Kazuma Koda designed alternative art for the West, but it’s not as nice will be used in the West, though both releases will have reversible artwork. Digital releases will come bundled with a mini soundtrack on all platforms, avatars and a dynamic theme on PS4 and a wallpaper set on PC. 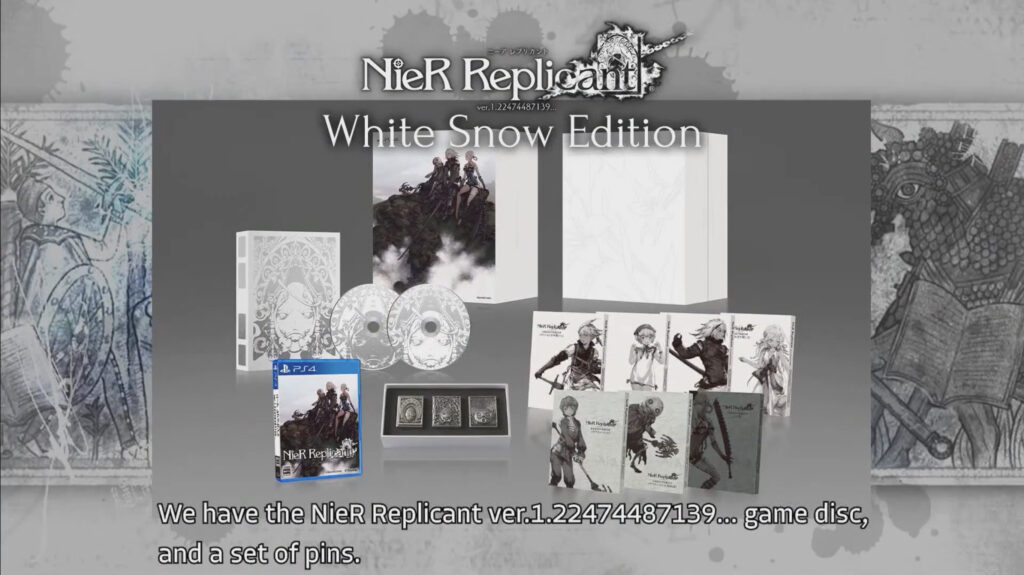 If you go physical, Square Enix is also planning to sell a White Snow Edition, which includes the game alongside pins based on the Grimoires that, as noted on stream, aren’t ideal for pinning to clothing due to their weight. The release will include a bumper voice acting script for every line in the game that’s packaged over multiple books and, perhaps most excitingly, a 2CD soundtrack, with one disc featuring music made just for this release.

A different limited edition will be sold internationally and will ‘probably’ have the soundtrack included. Keiichi Okabe is going to fight for it, anyhow.

NieR Replicant was the highlight, but it was far from the only thing being shown off on today’s stream. Next up, Daichi Matsukawa from Applibot came onto the TGS Online 2020 stage to discuss NieR Re[in]carnation, the upcoming free-to-play mobile title for iOS and Android. We’ve covered this game before, but a new trailer was shown off for the title on stream as the release of the game edges closer.

That being said, it’s hard to piece together much of anything from it. Having been challenged by Yoko Taro to deliberately not use any of Okabe’s music, this ‘difficult’ trailer is heavily distorted, quickly flicking between elements of story, battles and 2D and 3D gameplay segments. We did get to see a few new characters very briefly, and the tone of the trailer was intended to match the distorted nature of the weapon fates you’re tasked with fixing to ‘put the story back to how it was supposed to be’, but it doesn’t stop it being any less difficult to follow.

While it may have seemed inevitable considering the success of NieR internationally, it was nice to hear this stream confirm that the game will come to North America and Europe. A pre-registration campaign for the game begins today in Japan, with different in-game rewards up to 1 million registrations, where a solid-gold Mama figure worth 1,000,000yen will be raffled off to 1 person. Will it reach that goal? Not even the director is sure of that! 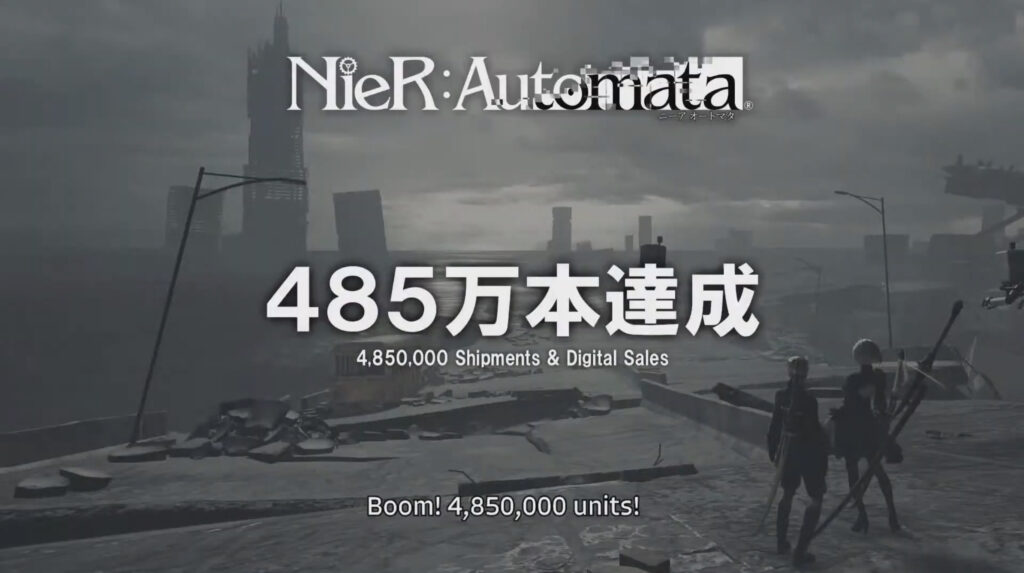 The final guest for this TGS Online 2020 show was NieR Automata game director Takahisa Taura, who came out to give updates on that title. While it was nothing to do with any new DLC or rereleases, he did come to update fans on the number of units the game had sold. Square Enix had thought the game had now sold 5million units worldwide before it was recalculated to 4.85million. This is still an impressive number, and to tempt people into helping the game reach this sought-after 5million figure, the title is now available at 50% off for a limited time on digital storefronts as part of Square Enix’s TGS sale.

This wasn’t the main reason Taura was here, though. He had come to discuss a brand new figure for the series that would be the first figure to be sold in the Square Enix Masterline lineup. This was shown off in a trailer just before the event, but one thing the trailer failed to capture was the sheer scale of this new NieR Automata figure, and the detail found within it.

This figure captures the likenesses of 2B, 9S and A2 similar to their appearance on the game’s box art. Where this figure stands out, however, is in its size. This is a 1/4 scale figure of the characters from the game, standing on the rubble of robots and machines, with high levels of detail found throughout. It’s hefty in terms of weight as well. It won’t on any shelf, that’s for sure!

This will be the first in a line of Square Enix Masterline figures, though details on the pricing of this figure are currently unknown, Don’t expect it to be cheap though! The figure will launch on or after Winter 2021. 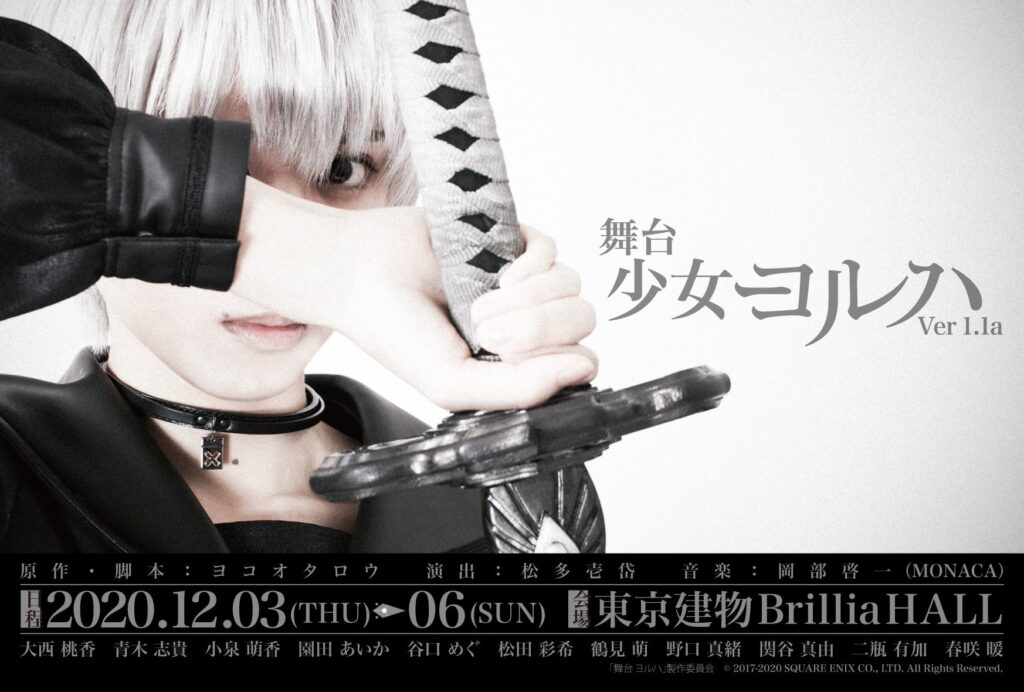 After previewing next month’s release of the March no-audience NieR orchestral concert on BD, the show’s final announcement was that of a new NieR stage, the first since the pandemic, titled YorHa Girls 1.1a. This will take place from December 3rd until December 6th at Tokyo Tatemono Brillia Hall, and will be a variation on the previous YorHa Girls stage play.

Which brought today’s announcement-filled NieR TGS Online 2020 stage show to a close. The big question on everyone’s lips was simple: would Square Enix sell the Yoko Taro puppet we’d seen throughout today’s event? The answer: maybe. Check Twitter, they’ll say if we decide to sell it. It matched the relaxed tone of this event, with the event being much more of a friendly conversation sharing new information than anything particularly formal. Jokes were made, and it was enjoyable even when announcements slowed thanks to the informality of it all. 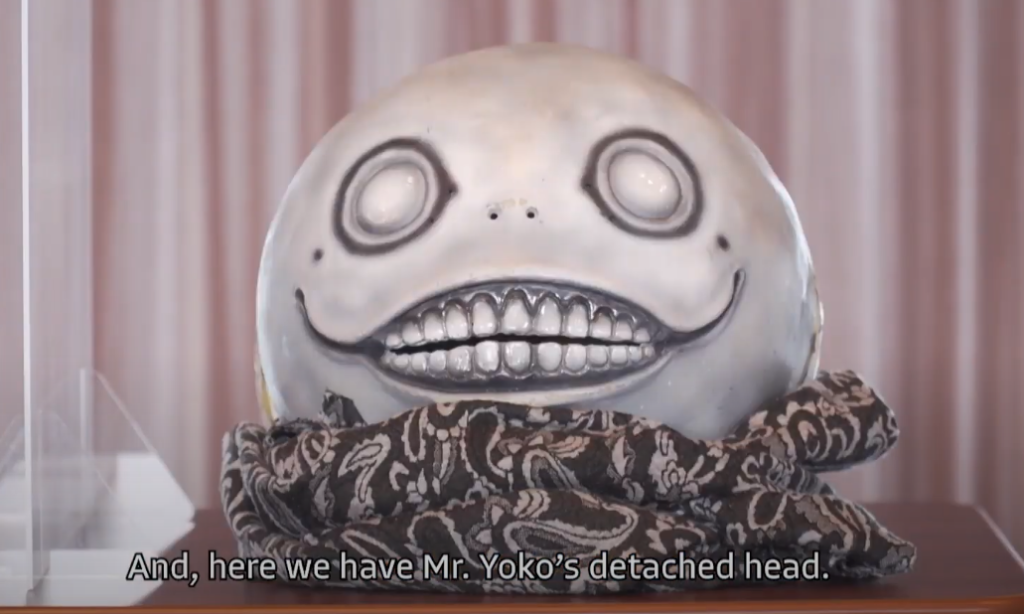 A ‘not much new information special talk show’ is planned for tomorrow as part of TGS Online 2020 where the same guests will appear, but, as warned, there won’t be all that much new information on NieR. When will we next hear something? Possibly soon. They did say more products related to NieR are in the pipeline. We’ll just have to wait and see.