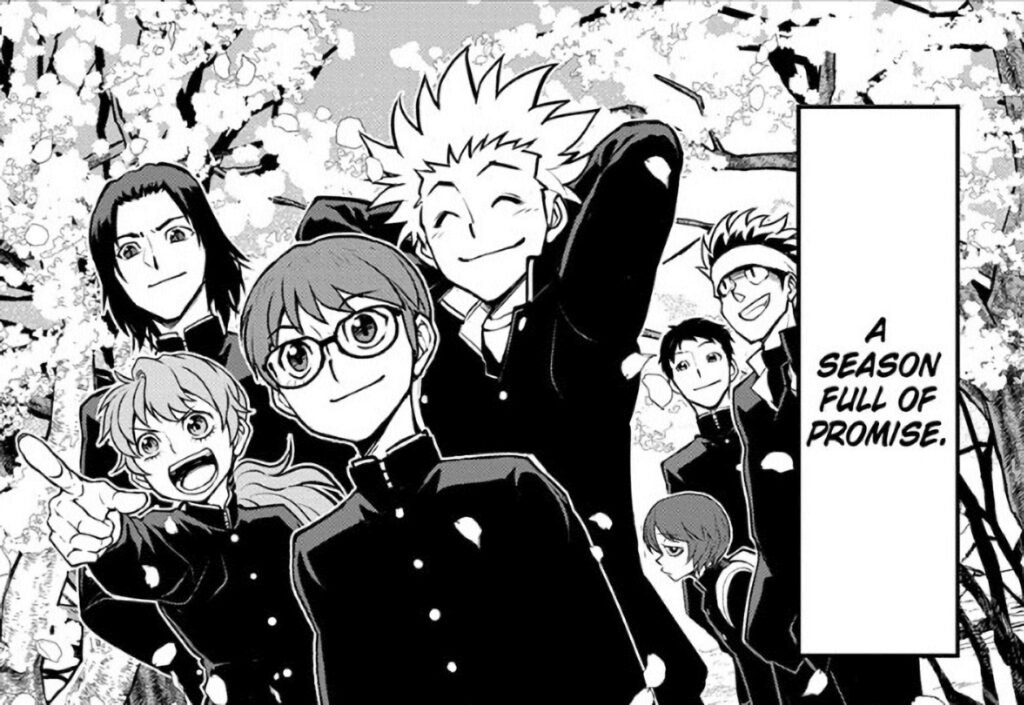 The beginning of a new week can only mean one thing: time for new Weekly Shonen Jump! This is where Jacob investigates the latest and greatest in the magazine, telling you what’s worth your time and what’s not. You can find coverage of other series under the tag Jump Time. Here’s Nine Dragons’ Ball Parade chapter 15.

Volume 1 of Nine Dragons’ Ball Parade is out this month, meaning that it is time to sink or swim for this surprisingly strong sports series. What’s more, depending on how things turn out, it will make chapter 15’s ‘season full of promise’ into either a very thematically resonant declaration, or deeply ironic in hindsight.

Last week, the newly rounded-out Kokuryuzan team got their asses handed to them. Hard. Despite assembling all of their desired players for the time being, the son of the Hakuo chairman (where our main characters Azu and Ryudou tried out in the first chapter) showed them first-hand just how much their abilities were lacking. As a result, much of Nine Dragons’ Ball Parade chapter 15 revolves around the emotional fallout resulting from this.

Here, Karin steps to the fore. Much like the underdog format of the series itself, she has emerged in recent weeks to become a ray of light, brightening everything up no matter where she goes. So while the rest of the team are moping in Nine Dragons’ Ball Parade chapter 15, she manages to get up on the field and give us this gorgeous double-page spread.

Very quickly, however, it turns out that the rest of the team aren’t simply skipping practice. Rather, they were up all night strategizing with Azu, who used his baseball nerd abilities to put together a custom training plan for each one of them. Much like the viewer, the ego-centric Tsubaki also has it in his head that they’ve all given up, but an impassioned speech ultimately isn’t needed. It shows how much his character has come since his introduction, at least.

With these training plans in hand, Nine Dragons’ Ball Parade chapter 15 promptly does a one-month time skip. That might sound a little alarming given how early we are into the series’ lifespan, but it actually makes sense: the main characters aren’t actually in high school, despite training for a high school team. If series author Mikiyasu Kamada can kill two birds with one stone by fixing this obvious contradiction and developing our characters’ abilities, then so be it.

The ‘season full of promise’ referred to at the beginning actually comes at the end of Nine Dragons’ Ball Parade chapter 15, signalling our characters’ entrance into high school. Considering just how much this series has managed to go against my initial impressions and turn things around, I’m hoping that such a season isn’t cut across by a sudden cancelation.

You can read Nine Dragons’ Ball Parade chapter 15 for free via VIZ Media.