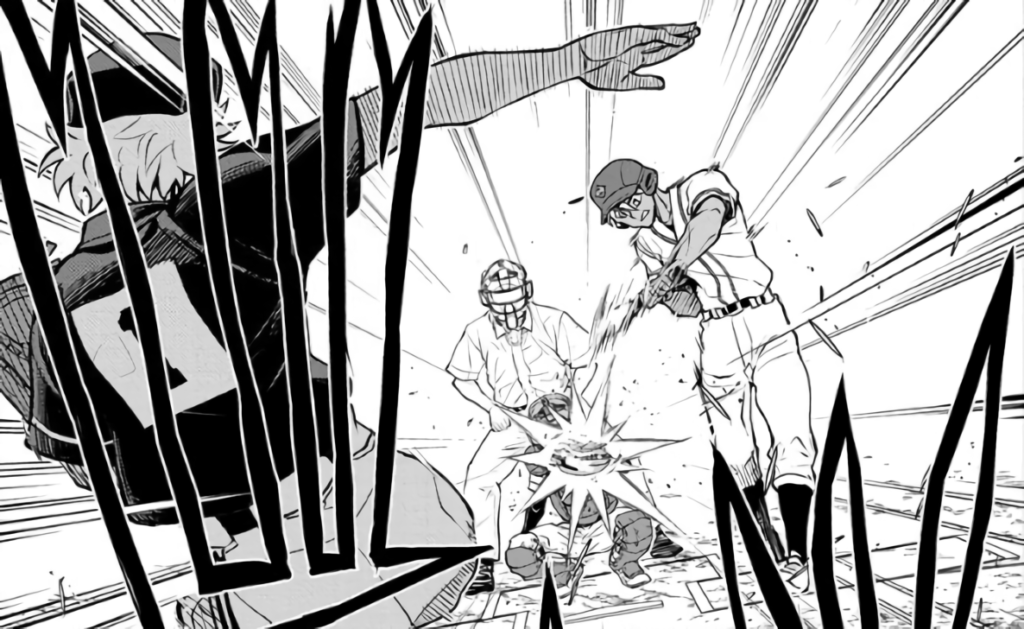 The beginning of a new week can only mean one thing: time for new Weekly Shonen Jump! This is where Jacob investigates the latest and greatest in the magazine, telling you what’s worth your time and what’s not. You can find coverage of other series under the tag Jump Time. Here’s Nine Dragons’ Ball Parade chapter 19.

Heading into this current tournament arc, Nine Dragons’ Ball Parade declared that this would be a ‘season full of promise.’ Unfortunately, sales figures seem to suggest that the series might not have much time to deliver on such a lofty statement, but at least chapter 19 is a fantastic sports story in its own right.

First of all, excellent pitching from Ryudou handed Kokuryuzan a comfortable win over Tomazaki High in the last match. Azu thought that their next opponent after this would be the formidable Rokusuikan, but they were unexpectedly knocked out by the third-rate Benikoma. The reason? Former athletics and swimming star Ikki Hibuse just joined and is carrying the whole team on his back, calling himself the ‘star of the universe.’ He’s pretty annoying, but an excellent antagonist.

Knocking Hibuse off his pedestal is thus the main focus of Nine Dragon’s Ball Parade chapter 19, although that’s easier said than done. The match isn’t exactly looking good for Kokuryuzan, with the self-proclaimed main character running circles around all of their players both as a pitcher and a batter. Thus, it falls to Toramoto to kick off the counter-attack, which he manages to do thanks to some first-rate advice from Azu.

Once Tsurugi steps up to the plate, the real magic of Nine Dragon’s Ball Parade chapter 19 begins. Hibuse’s sheer caprice pushes him into launching his trademark high-speed slider, leading to an incredibly tense moment where it’s not clear if Tsurugi has a handle on the situation. Yet, it turns out that he was waiting for this, intending to stand by his promise to take Kokuryuzan to Koshien. Three runs are secured.

You could say the same thing about Ryudou. Taking on Hibuse once again as a pitcher, he switches up his game halfway through to incorporate the ‘parachute changeup’: a pitch that starts off as a fastball but eventually pulls up slow. I don’t profess to know the foggiest thing about baseball, but one thing’s for sure: Nine Dragons’ Ball Parade chapter 9 had me on the edge of my seat the entire way through.

As a result, if this series’ fate is more or less sealed, then it’s just about how many excellent self-contained stories like Nine Dragons’ Ball Parade chapter 19 Mikiyasu Kamada can pump out in the meantime. With any luck, this might open the door for another serialization in the not-too-distant future.

You can read Nine Dragons’ Ball Parade chapter 19 for free via VIZ Media.