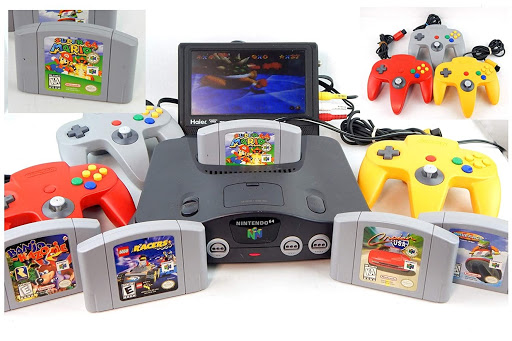 Anybody who is even remotely interested in gaming knows about the Nintendo 64 console (sometimes abbreviated as N64, or N64 system.) Even though it was discontinued in 2002 to be replaced by the GameCube, gaming veterans and young fans alike still love the games on it and the legacy of the system itself.

The Nintendo 64 Legacy: What Makes It Such A Classic Console?

The Nintendo 64 is clearly one of the most recognizable video game consoles in history. But considering how radical it was, with its iconic controller, Nintendo’s decision to stick with game cartridges instead of moving to disks like its competitors, and being the first console to have 64-bit gaming, how did it become such a classic?

To this day, many of the games released for the Nintendo 64 are also considered classics. They include some of the greatest and most influential games of all time.

Nintendo made huge technological leaps forward with the controller, particularly the analog stick. The new level of control that players gained going from the patented D-pad, limited to only eight directions, to the analog stick with its full 360 degree control changed everything about the way 3D games are experienced.

Some naysayers will point out that this is also the gaming console generation where Nintendo lost their position as the sole leader in the gaming industry, and that’s not inaccurate. The game system has some downsides, like the limited memory of the game paks Nintendo insisted on keeping, and the high prices of games for it.

But ultimately, the Nintendo 64 system and the games created for it have a longevity far beyond anything on the Sega Saturn or Sony PlayStation. They’re beloved as pioneers in gaming and for pure nostalgic fun, and that’s what makes the Nintendo 64 a classic.

The Nintendo 64 was first released in Japan in June 1996, soon to be followed by North America in September 1996, and Europe and Australia in March 1997.

The initial design, when it was still codenamed “Project Reality,”  was actually close to being finished as early as mid-1995, and it was shown at the November 1995 Shoshinkai trade show, initially slated for a simultaneous worldwide Christmas 1995 release date. The video game console would also bear the name “Ultra 64” before it landed on “Nintendo 64.”

However, in May 1995, Nintendo officially pushed back the release date to April 1996, saying that the software needed time to “mature,” and that third-party developers needed the time to finish new games for it. Outside engineers also theorized that the chips were underperforming and needed to be re-designed.

A very clever campaign long before the announced release dates kept fans excited for the Nintendo 64 (instead of buying a competing console) with ads that said “Wait for it…” and “Is it worth the wait? Only if you want the best!”

The Nintendo 64’s release date was pushed back one final time when Nintendo’s marketing studies showed that they would not be able to produce enough units for a simultaneous worldwide launch, and they wouldn’t be able to meet demand in April 1996. The surprise launch of the Sega Saturn had angered retailers, which is exactly what Nintendo hoped to avoid.

Nintendo’s strategy was successful, though! The initial shipment of 300,000 units sold out the same day, and the remaining 200,000 units of the first production shipped just a few days later, all of which had been reserved ahead of time.

Plus, before the Nintendo 64’s official release in the North American market, import stores were selling it for up to $699 and didn’t even include free shipping! For reference, the launch price of the Nintendo 64 in the US was originally slated to be $250, but was lowered prior to launch to $199.99 ($326 adjusted for inflation in 2019) in order to compete with the Saturn and the PlayStation. 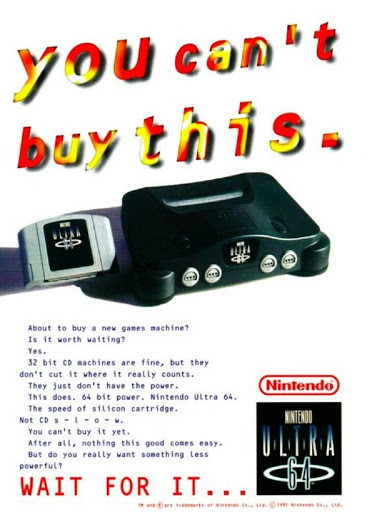 How Many Games Were Released For The Nintendo 64?

In total, only 388 games were released for the Nintendo 64. That’s much lower than the Nintendo 64’s competitors: the Saturn received roughly 600 games, and the PlayStation had about 1,100. Even previous Nintendo systems had more, with the NES and SNES boasting 768 and 725 games in the United States.

This was no oversight, but a purposeful strategy. Hiroshi Yamaushi had announced during the Nintendo 64’s November 1995 unveiling that they would be restricting the number of games produced for the Nintendo 64 so developers would focus on quality, rather than attempting to overpower competitors with sheer quantity.

And the Nintendo 64 game library does indeed include a much higher ratio of critically acclaimed and widely sold games. According to TRSTS reports, three out of the five best-selling games in the US for December 1996 were Nintendo 64 games. (The other two were Super Nintendo games.)

Beyond that, Super Mario 64 is the best-selling game of its generation, GoldenEye 007 had a huge hand in the evolution of the first-person shooter, and The Legend of Zelda: Ocarina of Time is considered by many to be one of the greatest games ever made.

Obviously, deciding which are the best Nintendo 64 games is subjective and a matter of opinion. However, drawing data from several reputable online sources including Metacritic, PC Mag, IGN, Business Insider, and the Wikipedia list of the top sellers, we’ve compiled this list of what are the five, commonly accepted, best Nintendo 64 games of all time.

Some additional “special mentions” from these lists include Perfect Dark, The Legend of Zelda: Majora’s Mask, and Paper Mario.

While overall highly critically and commercially acclaimed as a system, the Nintendo 64 was not a completely flawless console. One of its weaknesses was its low storage space, both in the console itself and in the game paks, which affected the visual quality of the games and what they could do with cut scenes.

To that end, in late 1998, Nintendo released the Expansion Pak. It contains 4 MB (megabits) of RAM, which doubled the console’s overall RAM to 8 MB. There are a few games the Expansion Pak is required to play, and others have limited gameplay options without it. It’s also necessary for all 64DD software, and was bundled with it when the 64DD was released in 1999.

The 64DD (short for “Dynamic Drive” and later “Disk Drive”) is capable of reading and writing disks. All of the Nintendo 64’s competitors used CD-ROMs, instead of anything like Nintendo’s game paks, because of their storage space. But only nine games were ever made for the 64DD, it’s considered to be a commercial failure, and was never released outside of Japan.

The Nintendo 64 controller is technically also considered an accessory, even though at least one is necessary for all gameplay, because more of them can be added or swapped out. It also has an absolutely iconic and daring design.

Shaped like an M, too complex for computers to model during development requiring that mock ups be made out of clay, the Nintendo 64 controller had three grips, eleven buttons, a directional control pad, and an analog “Control Stick” in the center.

Despite looking “weird,” critics gave it largely positive reviews. GamePro said that it “may look weird, but it feels great,” and Electronic Gaming Monthly stated that “Nintendo has made the most advanced and easy-to-use controller we have ever seen. It is extremely versatile and has enough buttons to take care of every possible contingency, now or in the future.”

Additionally, extra Nintendo 64 controllers all sold out on the Nintendo 64 Japanese release date, even though, at the time, all of the N64 games were single-player only. A similar situation was found during the North American launch, despite there only being a handful of multi-player games available.

The only drawback: some fans got blisters from the Nintendo 64 controller’s analog stick while playing Mario Party. Nintendo offered protective gloves to prevent injuries as part of a settlement with the New York Attorney General. Tim Weaver, editor of N64 Magazine in the UK, said that his staff had no such issues and the lawsuit “could only happen in America.”

What Is The Nintendo 64 Mini?

Rumors have floated around the gaming world about Nintendo releasing a new, mini version of the Nintendo 64, similar to the “Classic Edition” of their NES and SNES systems.

Unfortunately, so far, Nintendo executives have denied that a Nintendo 64 “Classic Edition” is in the works as they insist that their focus right now is on the enormously popular Nintendo Switch. Some of the old games are available through Nintendo Switch Online, but they have no plans to “switch” their focus away from their flagship device.

For now, then, make sure to save games from your old N64, along with the console itself, so you can replay them, although fingers are crossed that the execs will change their minds soon!

Despite its low memory and insistence on using cartridges longer than any of its competitors, the Nintendo 64 still manages to be one of the great consoles of all time. Gaming has changed a lot in the almost twenty years since it was discontinued, but the games it brought us will live forever, and that’s why the Nintendo 64 is the ultimate classic console.