Nisekoi: A Series of False Love and True Laughs 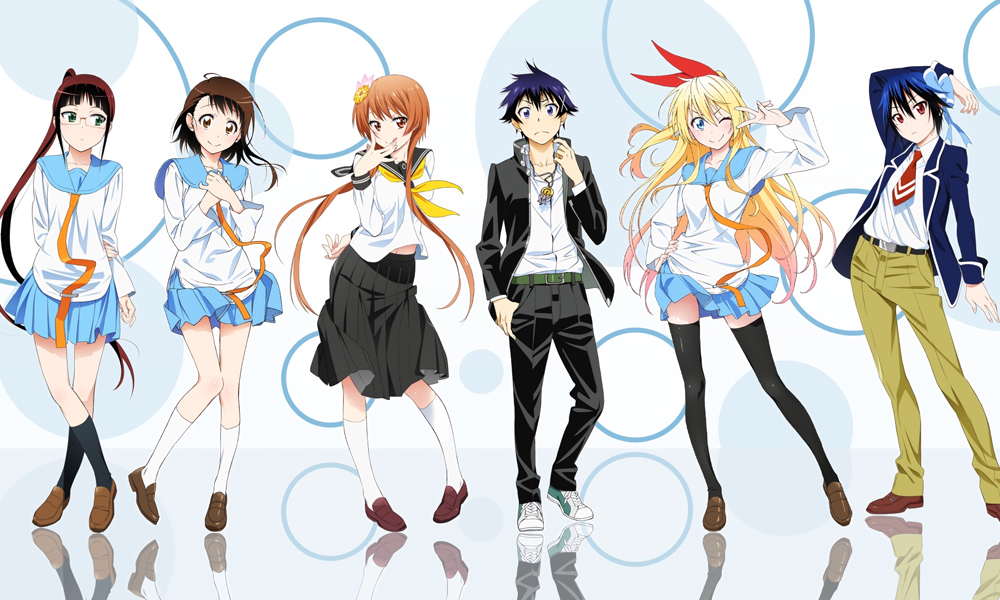 Let’s get this out of the way first: if you’re looking for a fresh and original new series to watch, Nisekoi is not for you. You’ve seen the story, characters, and plot twists in previous series before. But it takes the tropes you’re used to and ends up doing them exceptionally well.

As the UK Anime Network says, the anime has ‘taken old concepts and polished them until they’re gleaming and immaculate – and it works.’ So sit back, relax, and give your mind a breather with Nisekoi.

Raku, Chitoge, Kosaki, Marika, Tsugumi, and the Other Nisekoi Characters

Airing from January through May 2014, the twenty episodes of season 1 of Nisekoi follow Raku as he comes into contact with each of the four girls who are in love with him and their respective relationships and feelings develop and change.

At the beginning of the season, Raku is on his way to school when he is kneed in the face by a strange girl. At school, his injury is treated by Kosaki, on whom he’s had a crush since middle school.

The teacher announces a new transfer student, Chitoge, who just happens to be the girl who had accidentally crashed into Raku earlier! They immediately start arguing, and it doesn’t let up when Raku realizes the collision made him lose a locket he carries to remind himself of his first love.

Raku and Chitoge look for the locket together, but they can’t stop fighting. After a while, Raku tells Chitoge to just leave, but she then stumbles across the locket on her own. They part ways, decidedly not fans of each other.

Raku goes home, where his father, the head of a yakuza family, tells him that he needs to start pretending to be in a relationship with the daughter of the leader of a different gang to stop the two families from going to war. It doesn’t take a rom com fanatic to know where this is going: the daughter of the rival family is Chitoge.

Raku and Chitoge start their fake relationship, even though they can’t help but drive each other nuts, as everyone in their life watches. Raku wishes that he were able to date Kosaki instead, and Kosaki tells her best friend (but no one else) that she wants the same thing.

Kosaki’s best friend, Ruri, does her best to set up situations where Kosaki and Raku can get closer, but Chitoge always manages to get herself involved. In fact, Chitoge and Raku find themselves in plenty of charged situations together, which leads to them having some genuine conversations and finding some real common ground.

As both Chitoge and Kosaki make progress with Raku, Seishiro Tsugumi transfers into the school. A childhood friend of Chitoge’s who prefers a boy’s school uniform, she’s actually a girl and an assassin for Chitoge’s family, the Beehive Gangsters. She isn’t sure that Raku is an acceptable partner for Chitoge and challenges him to a contest, but respects him when he wins.

Naturally, considering the genre that Nisekoi cleanly falls into, Tsugumi begins to develop feelings for Raku as well.

The group, with all three girls who are into Raku, stumbles into more high school antics where they all grapple with their respective feelings for each other. They also individually try to solve the mystery of who the girl in Raku’s locket is, since none of them know who has the key that will open it.

Towards the end of season 1, the fourth and final girl who is in love with Raku (and also a main character) enters the picture: Marika. She’s introduced as Raku’s fiancee, which is a huge surprise to everybody, including Raku himself, and seems to have knowledge of the promise of love he made to that mysterious girl ten years ago.

At first, Marika tries to bribe Raku with her knowledge of his past into leaving Chitoge, but when he refuses and starts to put together who she is on his own, Marika relents and fills him in. She also tells him that over the past ten years, she has molded herself into being Raku’s ideal woman.

The rest of the season follows some typical anime rom com tropes (a beach episode, for instance) as the now complete main cast interacts, explores their feelings, and does their best to win over the person of their dreams, even as those romantic dreams change. 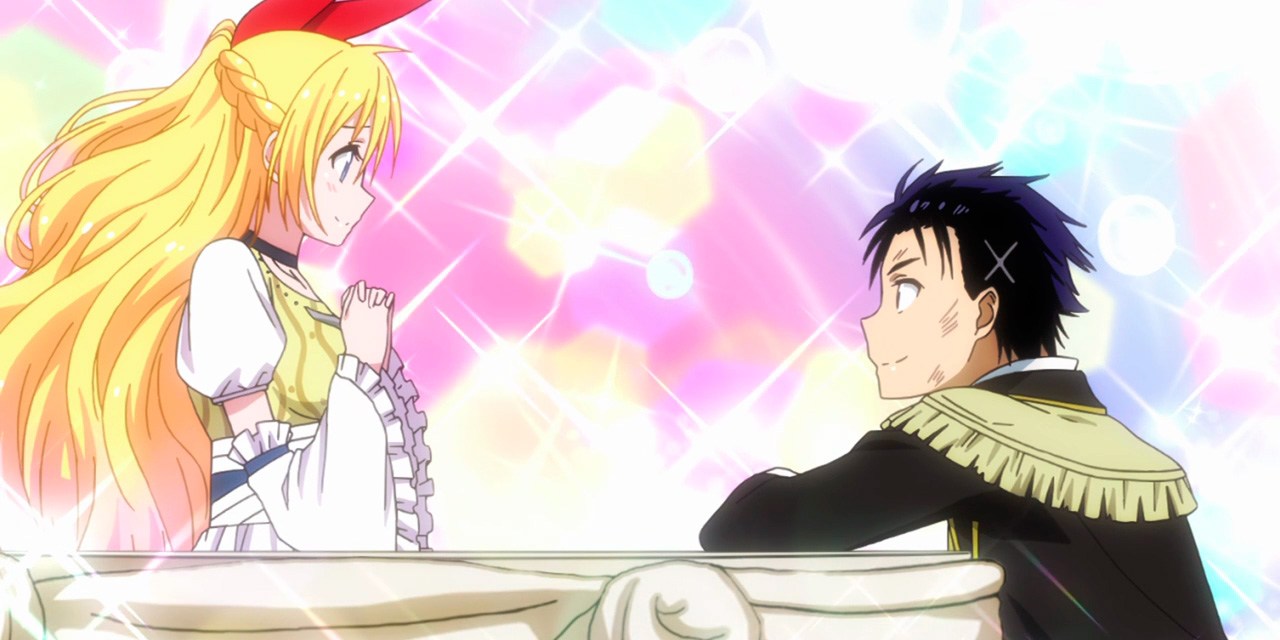 Airing from April through June 2015, the twelve episode season 2 is just over half the length of season 1 and much more episodic than story-based, but is still just as fun!

Season 2 pretty much picks up exactly where season 1 left off, but doesn’t involve nearly as much change over the arc of the season. Instead, it expands the Nisekoi universe by taking time to explore the main characters’ relationships with their families, their best friends, and each other.

Mini arcs over season 2 include Chitoge’s mother coming to Japan but holding Chitoge herself at an arm’s length while hiring Raku as her assistant, Kosaki’s sister getting to know Raku and developing a crush on him that she tries desperately to repress, and Shu’s (Raku’s best friend) own romantic life.

But overall, it’s just silly, over the top fun. Like the Valentine’s Day episode, where each of the four main girls has a much harder time than anyone would expect delivering homemade chocolates to Raku. Or the episode that turns the four lead girls into “magical girls.”

You’ll notice that nothing about the content of season 2 indicates any kind of resolution, which, story-wise, would necessitate a Nisekoi season 3.

Unfortunately though, that hasn’t come out yet. And as five years have passed since the release of season 2, it’s easy for Nisekoi fans to start having their hope fade on this one.

The bright side, though, is that there has still been new Nisekoi material in that time with the live action movie (more on that below) and there’s still plenty more material to work with in the manga. Although it would be somewhat belated, with enough fan support, there is still reason to believe a season 3 could come out one day.

In addition to the anime, a live action movie adaptation of Nisekoi was released in December 2018, officially titled Nisekoi: False Love. The film doesn’t add any new story points to the franchise, but it successfully adapts the manga for the live action medium.

Although fans online tend to like it for its irreverence, fans at the box office were not so enthusiastic. The live action movie debuted in ninth place for its opening weekend in the Japanese box office and unfortunately never exactly turned out to be a sleeper hit.

Conversely, the original Nisekoi manga was tremendously popular! Created by Naoshi Komi, it ran for five years, was collected into twenty-five volumes, and, as of April 2018, had twelve million copies in print.

Originally a one shot in Jump NEXT! magazine in January 2011, it was serialized in Weekly Shonen Jump from November 2011 until August 2016. Shueisha published the first chapter online in English in December 2011, but it was later licensed for English publication by Viz Media under the same name as the movie. It is currently available online and in print.

Besides everything else, the manga also spawned a light novel series called Nisekoi: Urbana, a spinoff manga with Kosaki as a magical girl called Magical Pâtissier Kosaki-chan, a voice comic, drama CD, and a visual novel for the PlayStation Vita.

If you’re looking for fresh ideas and original stories, you’re not going to find them in Nisekoi. But if you just want to have a good time with a high school romance, then this series is here to serve! Accomplishing exactly what it sets out to do, Nisekoi is a light, easy, enjoyable escape for any time you need or want it.