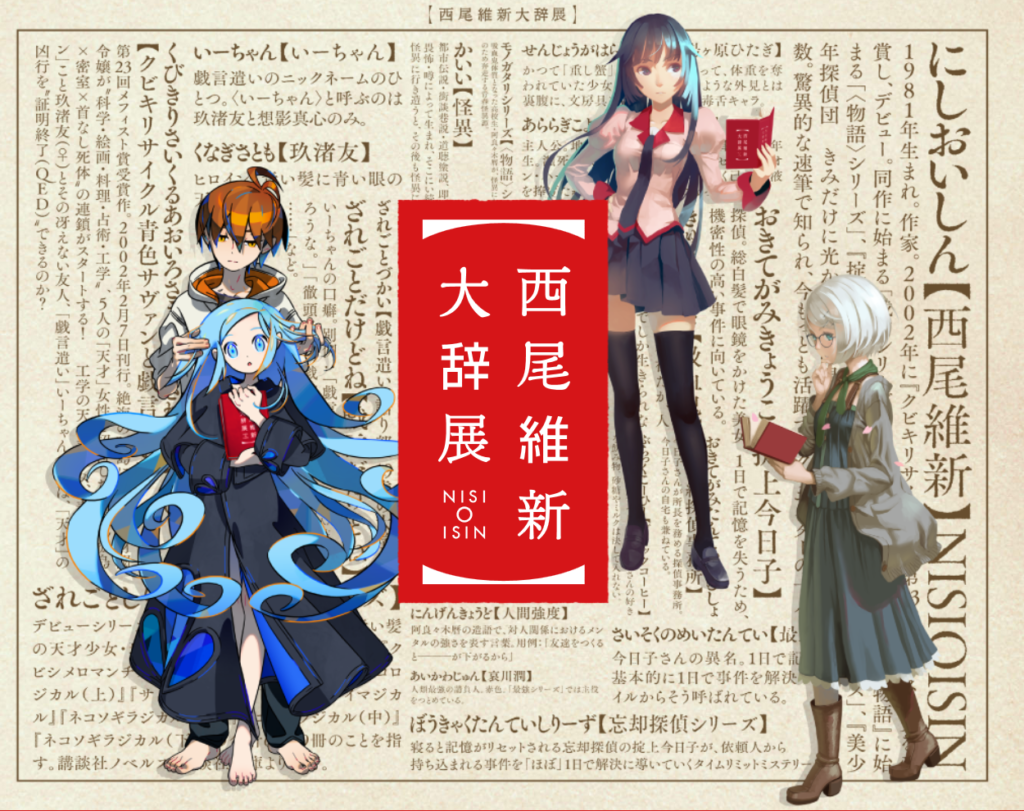 Nisio Isin, the pen-name of the conveniently named Nisio Isin which you’ll sometimes see stylized as NisiOisiN to really hammer in that palindrome, is one of Japan’s best selling and most prolific authors.

Chances are if you’ve spent any time watching anime over the last 10 years, you’re more familiar with his work than you think even if you haven’t touched a book in all that time.

He’s most well known for creating the iconic Monogatari franchise, which includes Bakemonogatari, Kizumonogatari, Nisemonogatari and at this point over a dozen other similarly named titles. These books have one after another been animated by auteur director Akiyuki Shimbo at Shaft to great acclaim over the years, each generating more than enough money to justify the adaptation of the next in the series.

The light novelist deserves all the praise and success derived from the Monogatari series he gets, however, he’s done a lot more than that.

His previous Zaregoto series featured some genuinely next level mystery writing with all the personality of the Monogatari to boot. The Katanagatari books, not related to his most famous series of books despite the similar name, took to the past to tell a samurai tell only the world’s most peculiar light novelist could.

He was even asked to write an official Death Note novel at the peak of Death Note’s popularity, a task which wouldn’t have been assigned to any old writer. Nisio Isin can call himself a Shonen Jump veteran having penned the unconventional high school battle manga Medaka Box.

Light novelist, Jump creator, mystery author, sell out? Truly there’s not a single label, a single face, you can attribute to Ishin.

Nisio Isin Sure Has Written A Lot Of Books…

While some one-off books exist in Nisio Isin’s bibliography, like his Death Note piece Another Note: The Los Angeles BB Murder Cases and the recently animated Juni Taisen, he tends to write long-form light novel series with no end in sight.

The Monogatari series is on its 25th book and it only started in 2006. Katanagatari finished at 13 volumes and Zaregoto sits at 9 not counting its 7 volume spin-off series.

Regularly publishing more than one book a year, sometimes putting more than one volume out a month, in fact, Nisio Isin has racked up a great many books to his name, and we haven’t even cited his manga works yet. We couldn’t tell you how the author writes at such a fervent pace will still retain such a high quality of output.

It would be one thing if his Light Novels read like manga; Despite volumes ending, each chapter leading directly into the next as one ongoing story. The majority of his releases, even in his long-running series, read as individual novels though.

Aside from entries which include ‘part 1/2/3’ in the title, works in the Monogatari series each stand on their own for example. Kizumonogatari can be read as an entirely individual tale as could Kabukimonogatari.

The Zaregoto series reads the same way, with each book containing its own mystery like a Sherlock Holmes story. Katanagatari has a bit stronger of a throughline with an end goal but those two are written with the individual volume in mind. Successfully putting so many ideas to paper, he’s the mad genius of the light novel world to be sure.

With the many Monogatari anime, Katanagatari OVA series, 8 episode adaptation of the first Zaregoto novel, Juni Taisen TV anime, and the two seasons of Medaka Box, Nisio Isin has seen a lot of his works come to life.

Even putting aside the Medaka Box anime which can be considered more of a product of the Shonen Jump manga to anime pipeline, there’s no denying there is a culture of his work getting animated. The phenomenon arguably centers on the rampant success of the first Monogatari anime Bakemonogatari which came out in 2009.

With Nisio Isin’s unique character approach coupled with Akiyuki Shimbo’s one of a kind sense of visual direction, fans immediately fell in love with the franchise. From that Nisemonogatari, Nekomonogatari, and more came not soon after. That team would eventually handle the Zaregoto adaptation as well.

Katanagatari was also animated early on by a different creative team but was met with much critical success. His works seem to do just as well when animated as they do in book form and so they keep making them.