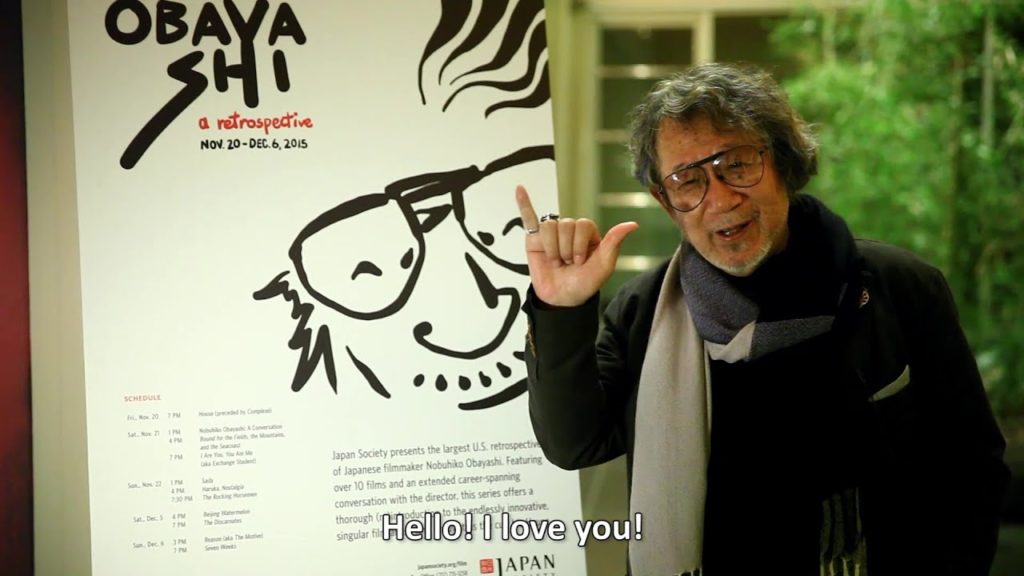 Nobuhiko Obayashi may not be a household name in the United States, but you may have come across some of his work over the years. For example, his debut feature film, the 1977 Japanese horror classic “House”, has been immortalized in the Criterion Collection and is a global cult hit. Over the course of his career, he directed 41 films including a live-action adaptation of “The Girl Who Leapt Through Time” and the award-winning “Samurai Kids”.

It starts with a House

Obayashi got his start in filmmaking in the 50s after leaving medical school to pursue more artistic endeavors. Upon being accepted to the liberal arts department of Seijo University he began working with 8mm & 16 mm film, leading to an interest in experimental filmmaking toward the end of his university career. From there he would go on to influence the 1960’s experimental film movement in Japan working on a number of projects that developed the avant-garde style of filmmaking that he would become most known for.

Before making the leap to feature films he got his start in the industry directing a number of popular advertisements featuring American celebrities in the 1970s. In 1977 he was tasked with creating a horror movie in response to the recent horror boom in the United States. This debut film would become the movie that introduced him to the world, the Japanese horror-comedy, House. A simple ghost story at heart, Obayashi employed a number of trick cinematography techniques and simple special effects to create the surreal visuals which propelled the movie into the status of a cult classic. The film won him an award for best new director and kick-started a 40 year long career which also delved into the mainstream. It’s a film that to this day I find entirely indescribable, and will go out of my way to introduce to any of my friends who are willing to watch.

Exploring a range of genres

His 1993 film Mizu no Tabibito: Samurai Kids was particularly revered, winning Japanese Academy Awards for best score (by Joe Hisaishi) and most popular film. The story is based on a book of the same name which follows a young boy who finds a warrior water sprite in a polluted stream. The boy becomes friends with the small warrior, who is adjusting to living in a modern household setting. Westers may compare it to “The Indian In The Cupboard”, but it’s a film that absolutely stands on its own.

His 1998 film, Sada, follows the true story of Sada Abe, a geisha and prostitute who in 1936 erotically asphyxiated her lover, then removed his genitalia and carried it on her person as a keepsake until her arrest days later. The story became a sensation in Japan being portrayed as a crime of passion and had inspired a variety of media over the years, but many focused solely on this story where Obayashi’s film explored more of her life.

Of course, true to his style, the film also employs the unique style and approach that Obayashi had become known for. Rather than being a straight crime drama, the movie contains the same kind of disjointed approach that made House so successful, using avant-garde visuals to tell the story at different points in the film and creating something that truly stands out against other adaptations of Abe’s story. It went on to win the FIRESCI Prize at the 48th Berlin International Film Festival. Criterion Collection has released the film in the United States and it’s currently available on their Criterion Channel streaming service.

Cinema in pursuit of peace

In 2017 Obayashi was diagnosed with stage 4 cancer and given months to live. Against all odds, after the diagnosis he began production on the film “Hanagatami”, a project that was conceived before his directorial debut and was considered his passion project. The film was a reflection of his childhood, focusing on “pureness of youth beset by the chaos of war”. It would go on to be critically acclaimed, winning the Best Film Award at the Mainichi Film Awards.

His final film, Labyrinth of Cinema, was released in 2019. In this film, the same themes were on display while also delivering the message of the ability cinema can have in influencing beliefs and teaching lessons. It finds 4 young adults attending a movie marathon at a soon to close cinema transported into the history of wartime Japan.

In an associated press interview following the release of his final film Obayashi expressed his belief in the power of cinema stating “Movies are not weak, movies express freedom.” He was a strong believer in peace, and in his later years emphasized the horrors of war through his work. In that same interview, Obayashi expressed “Let’s value freedom with all our might. Let’s have no lies.” a statement that I think we would all be well off to take to heart.