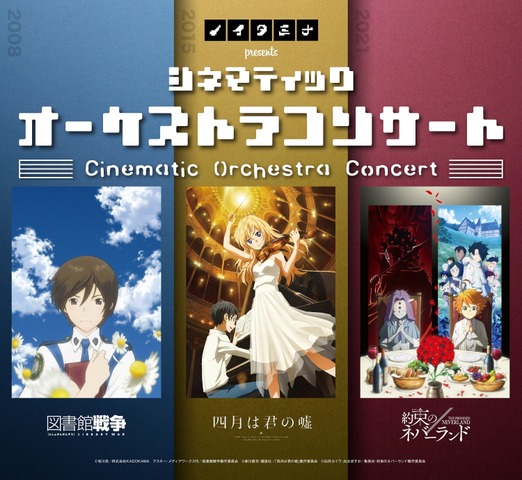 Because of the coronavirus, a lot of big-name shows have been rendered down to purely digital experiences, if they haven’t already been flat-out concerts. Online livestreams of concerts have become mainstream, with acts like amazarashi and Kyary Pamu Pamyu doing what they can to replicate the authentic concert-going experience. However, not everything has been so virtual. December saw the Dragon Quest Wind Orchestra rock the Tokyo International Forum with arrangements of classic Dragon Quest songs. Another concert has been added to the Forum’s roster, this time held by the late-night anime block noitaminA.

noitaminA will be having its very own orchestral concert to commemorate its 15th anniversary. The budding Satoshi Yoneda will be conducting the Tokyo 21c Philharmonic through a number of tunes pulled from Library Wars, Your Lie in April, and The Promised Neverland. The music will play over top of edited clips from their respective anime, making the concert practically a real-life AMV experience. The 15th anniversary concert will run from 29 to 30 May for a set of four performances. Ticket pre-sales start on 4 March, while general ticket sales start on the 20th.

The three anime musically represented at this concert all had their first airings on noitaminA’s late-night anime blocks. noitaminA has maintained a proud tradition of introducing quality titles to legions of new fans, which makes sense why they refuse to let COVID get in the way of celebrating their legacy. It’s not the first time they have done this either. Last summer and holiday season had noitaminA set up exhibitions in Odaiba, Tokyo to showcase all the classic anime they have broadcasted over the years.

For music fans wanting to go back to live events, this upcoming noitaminA show will hopefully prove to be the concert experience they have yearned for.