The nominees for the 2020 ‘Tsugi ni Kuru Manga’ awards have been announced, bringing with them a whole host of familiar faces to readers of our website. The annual event, launched in 2014, has always been of particular interest to us here at OTAQUEST: it has the uncanny ability to identify those manga series that blow up in the next period. This year’s nominees also show that we’re doing our job in terms of delivering the latest in Japanese pop and subculture to an English-speaking audience.

In order to be eligible for the Tsugi ni Kuru Manga awards, a series needs to have less than five collected volumes released and be an original work (no sequels). Series are also separated into two, ‘Print’ and ‘Web’ categories. A panel of judges then selects the initial pool of nominees, from which fans can vote for their favorite in a mix between fan-driven and panel-selected models. 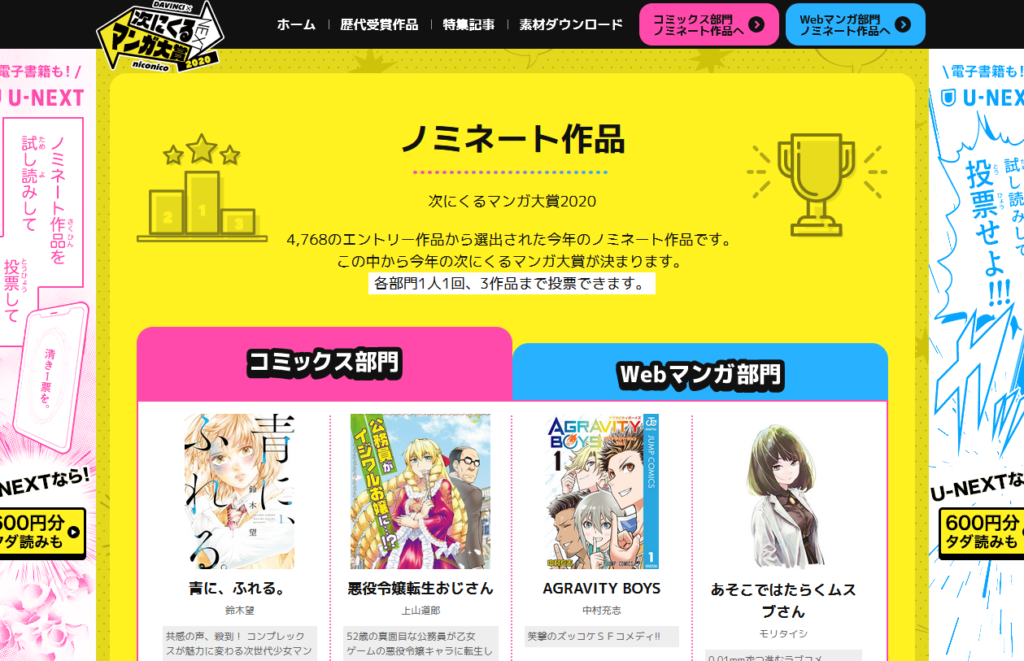 For this year’s 2020 awards, the Tsugi ni Kuru Manga judges narrowed down a pool of 4768 potential series to just 100 nominees, with 50 in each category. What makes me happy is the fact that our team has covered most of the nominees in prior pieces, especially in the print category: Yoshifumi Tozuka’s Undead Unluck, which just launched earlier this year in Weekly Shonen Jump; Bukimi Miki’s SHY, which courted some controversy in Weekly Shonen Champion last December, and Katsura Ise and Takuma Yokota’s Magic the Gathering-focused love comedy Destroy all humankind. They can’t be regenerated.

Of course, there are no doubt many other nominees for the 2020 Tsugi ni Kuru Manga awards that are worth checking out, but one of the problems of the event is that it tends to elongate your ‘plan to read’ list by several factors. Out of this year’s nominees, one such series stands out: The Cuckoo’s Fiance, which began in Weekly Shonen Magazine earlier this year and has already garnered for itself a considerable amount of buzz.

You can check out the full list of nominees for the 2020 Tsugi ni Kuru Manga awards via the official website. Don’t forget to vote for your favorite, too – everyone gets to vote for up to three series in each category.