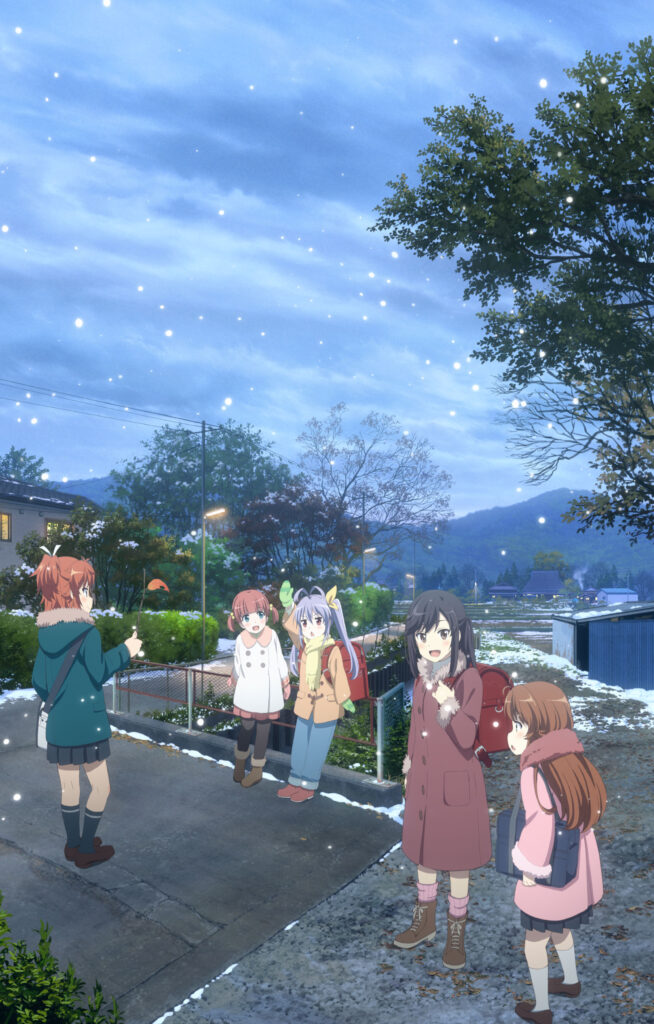 The cute, feel-good comedy anime series Non Non Biyori will return for a third season in January 2021. Kadokawa Anime released a promo video, along with a new visual for the series on Sunday.

The promo video features the new opening theme, Tsugihagi Moyou by nano.RIPE.  We also get to hear the third season’s ending theme, ‘Tadaima’. The ending theme is performed by the main voice actors of the show: Kotori Koiwai, Rie Murakawa, Ayane Sakura, and Kana Asumi.

The slice-of-life series is unique for featuring the rural Japanese countryside, rather than the hustle and bustle of Tokyo or some other urban region. The show is vaguely similar to Laid-Back Camp as they both share a somewhat carefree and laid-back rural atmosphere.  However, instead of the camping and hiking outdoor recreational areas of Yamanashi Prefecture, Non Non Biyori features the more mundane farm country.

In the first season, Tokyo native Hotaru Ichijo (Rie Murakawa) transfers to a school out in the country.  Naturally, she has to adapt pretty quickly to the slower pace of her new village. Way out in the country, manga can be hard to find, and the distances are wide open. There are also only a handful of students at Hotaru’s new school. Luckily, her new friends are there to help her out. While the story starts off with Hotaru, the spotlight is often stolen by Renge Miyauchi (Kotori Koiwai), the eccentric first grader.

The first season aired in 2013, and a second season (Repeat) followed in 2015. The second season takes place during the same year as the first season. The girls visited Okinawa in the Non Non Biyori Vacation movie, which came out in 2018. And there have also been a couple of OVAs.

According to reports, new characters will be joining the cast in the third season: Shiori (va: Misaki Kuno), the daughter of a police officer; and Akane Shinoda (va: Aimi Tanaka), a high school student.

The new season will be subtitled ‘Non-Stop.’  The first two seasons are available at Crunchyroll.