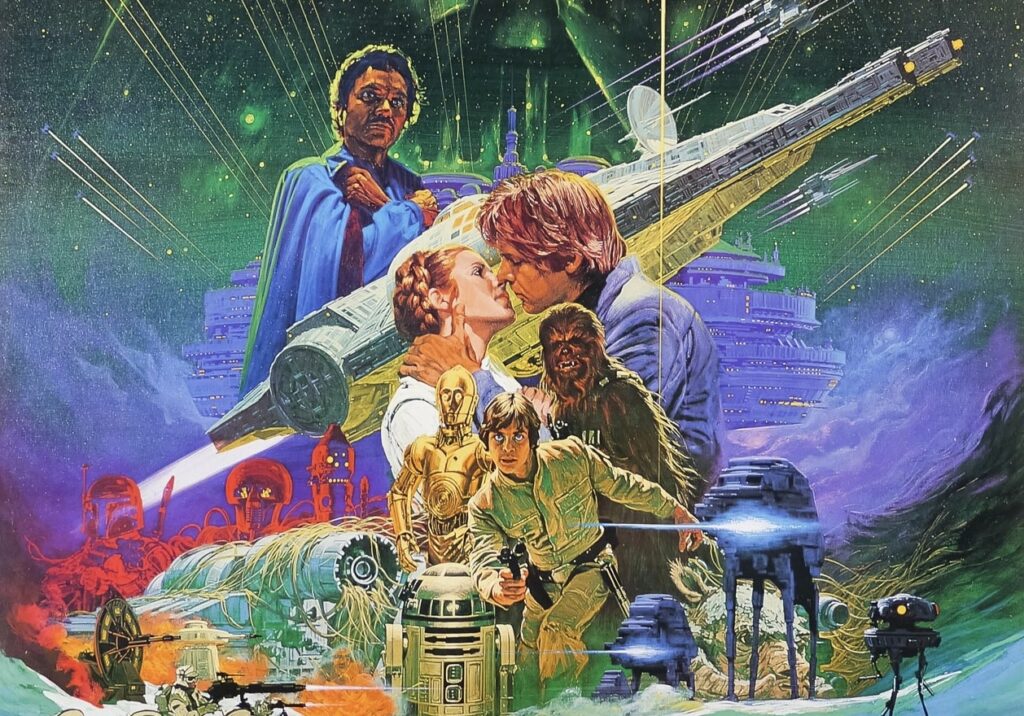 While you may not recognize the name of Noriyoshi Orai, you will at least recognize their work. Having worked on the stunning Heisei and New Millennium-era Godzilla films, the international Star Wars original trilogy posters and more, their highly detailed sci-fi and human artworks have dazzled audiences and defined some of the world’s most iconic films.

Movie posters are the most overlooked area of film promotion and the cultural understanding of how we consume films. For many, a movie poster or a billboard is our first exposure to many films (even in the age of the internet), and a highly engaging movie poster can also focus renewed attention on a film that may be flagging in momentum before release. You only need to take one look at all the memes that have been shared surrounding the recent Godzilla vs Kong US IMAX poster to understand that movie posters still have the power to shift the conversation surrounding a movie.

Before the internet era, movie posters were even more important than they are now. Print media and public poster displays were the main ways to spread awareness of major releases. Japanese movie posters in the 1950s and 60s often simply replicated iconic scenes from the film, featuring large shots of prominent actors or key movie moments to grab the audience attention. Often hanging outside of cinemas, on streets, or in smaller versions on trains, the posters needed to instantly convey information about the movie, and they were one of the primary ways audiences found out about upcoming films. 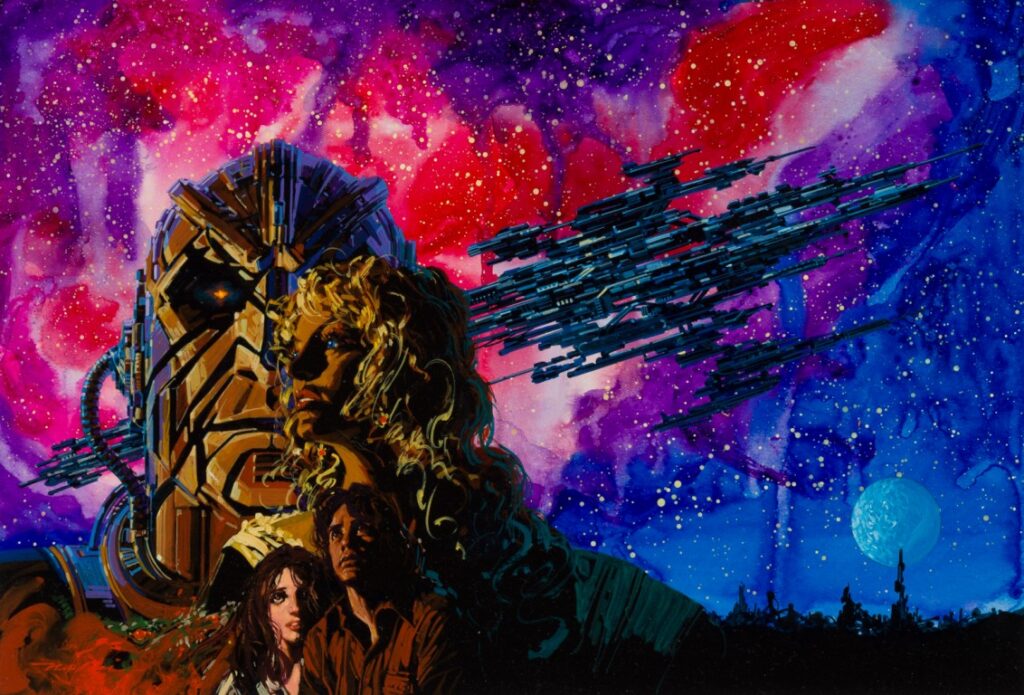 This is where Noriyoshi Orai comes in. Having entered and eventually dropped out of a degree in the Fine Arts department of the Tokyo University of the Arts (majoring in oil painting), Orai forged a career through highly detailed fantasy- and sci-fi-inspired oil paintings. He opened his first solo oil painting exhibit in Ginza in 1960 and made a career for himself in the 1960s doing artistic promotional and advertising work in newspapers and magazines. 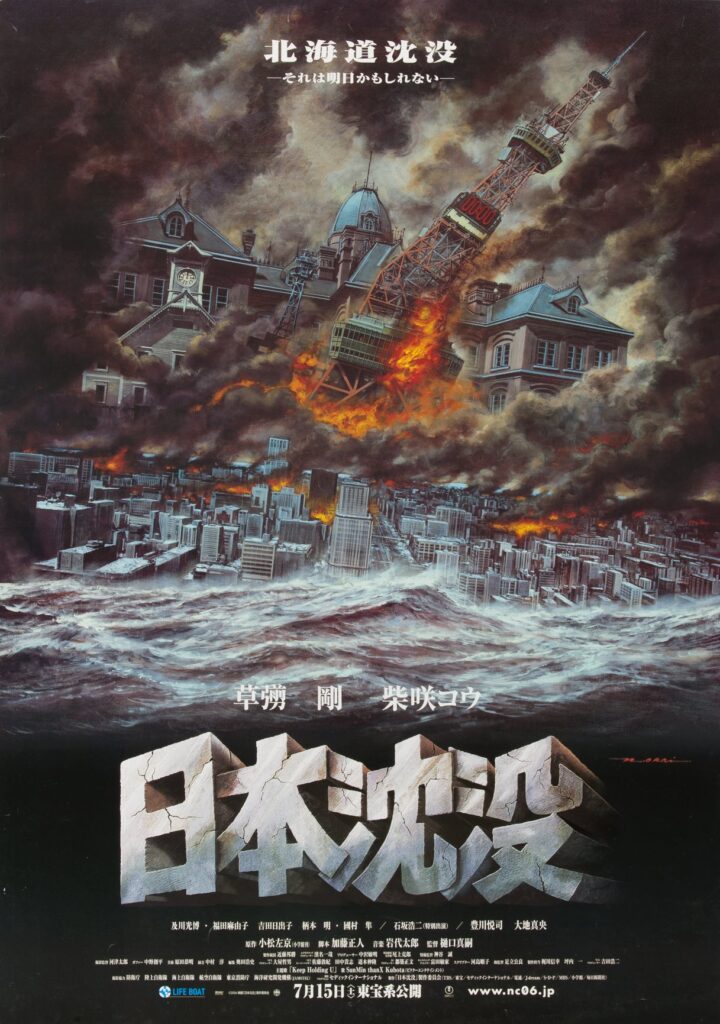 Through the 1960s and 1970s, he made the cover art for science fiction works and major advertisements such as the stunning art he produced to promote a new edition of the Romance of the Three Kingdoms to coincide with Kadokawa’s 60th anniversary. His first movie poster commission came in 1973 with Japan Sinks, a series of posters produced to show the destruction of iconic landmarks that matched the tone of the film.

At this time, his art was brought to the attention of George Lucas. Orai created art for Star Wars: The Empire Strikes Back that would later be used not just in Japan, but also in wider international releases. You likely recognize the poster above as one of the most iconic pieces of Star Wars art in the franchise’s history, with the overshadowing head of Darth Vader fronted by the Millennium Falcon and all the major characters of the film.

His work in Star Wars led to his career taking off, and it wasn’t the only time his art was used to promote movies outside of Japan. The iconic poster for The Goonies in the US was also drawn by Noriyoshi Orai. This came along with some stunning fantasy-inspired work for SF Magazine (which he did for seven years) and other Japanese movie posters.

As a result, his brush has touched many of the most iconic franchises in Japan and around the world. Another incredible series of posters produced by Noriyoshi Orai have to do with the Heisei Godzilla franchise. TOHO revitalized the creature in the Heisei era by disavowing the childlike stupidity of many of the later Showa Godzilla films to create a more morally ambiguous, dangerous creature in its wake. The idea was that Godzilla was no longer a threat, and this needed to be restored. 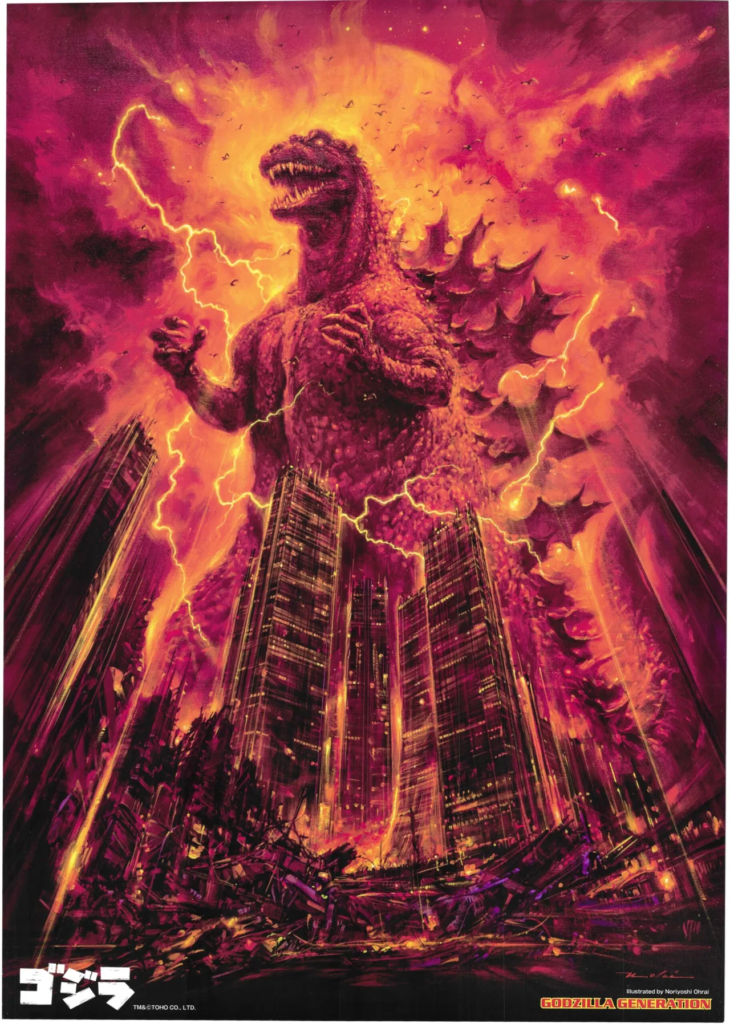 Considering how many of the later Heisei Godzilla films do return to some of the free-form silliness of the Showa era (not that this is a bad thing!), it was Orai’s series of movie posters that reinforced the idea (before audiences even entered the theater) that this new incarnation of the franchise was more threatening than what came before. His poster for Return of Godzilla, the 1984 Godzilla feature that signaled Godzilla’s return to the big screen, is doused in the red of fire and destruction, with Godzilla itself towering over the skyscrapers that signified Japan’s economic prosperity. 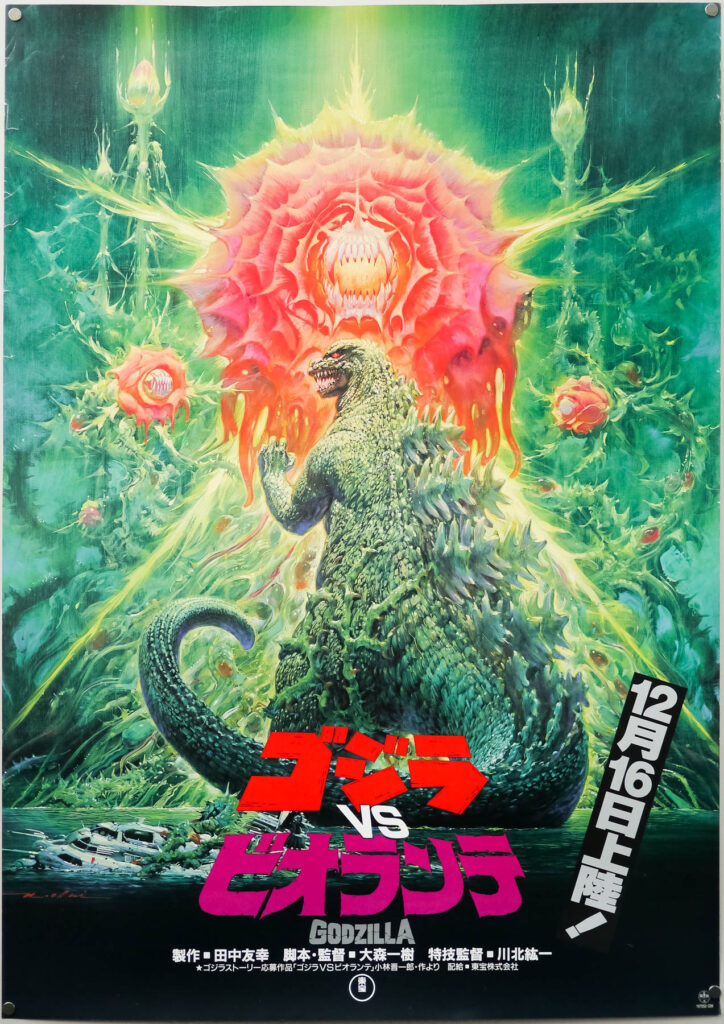 Each of the Heisei Godzilla posters Noriyoshi Orai produced is iconic and breathtaking in their own right, arguably none create as much of a threat and instill fear in the audience quite like this first poster. Heavy detail brought to life through intense shading and detail, with a majestic quality to the color that gives it a larger-than-life appearance, is what defines all of Noriyoshi Orai’s work, and it was signified in this series of prints. 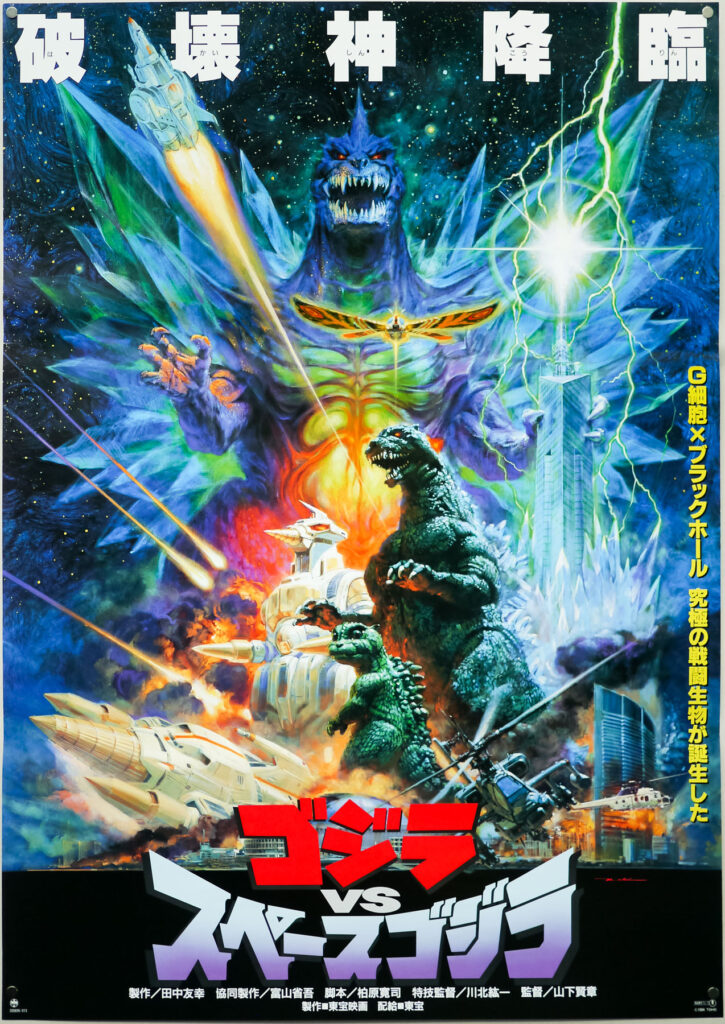 I could continue writing for hours and still only scratch the surface of just in how many franchises and places you can find the work of Noriyoshi Orai in Japanese pop culture. Should we discuss the many books his artwork featured on the cover of? After this already impressive slate of movie posters, should we discuss his work on the Metal Gear franchise?

How about his various stunningly detailed depictions of warships and scenes of battle, which were used for everything from books to model kits and more? 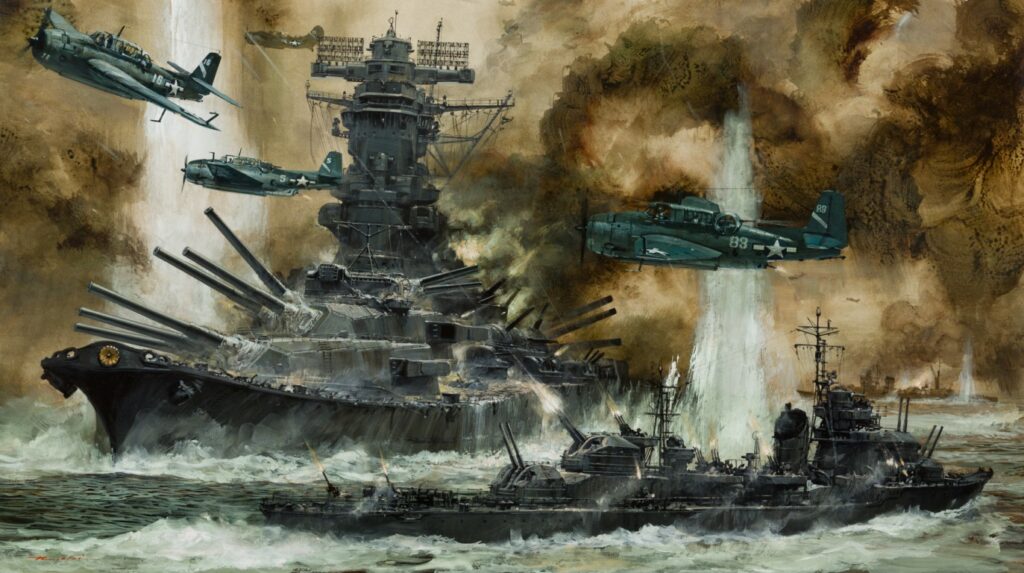 That’s what makes discussing Noriyoshi Orai’s work so difficult, as it’s hard to know where to draw the line. Only depicting his most iconic work on Star Wars and Godzilla obfuscates some truly stunning artwork produced for franchises that may be less known outside of the country or have even fallen into obscurity. It’s almost impossible to name every film or property he’s worked on over the years, as there are simply too many. When he held an exhibition in 1981 following the release of Star Wars, over 600 stunning artworks were displayed. 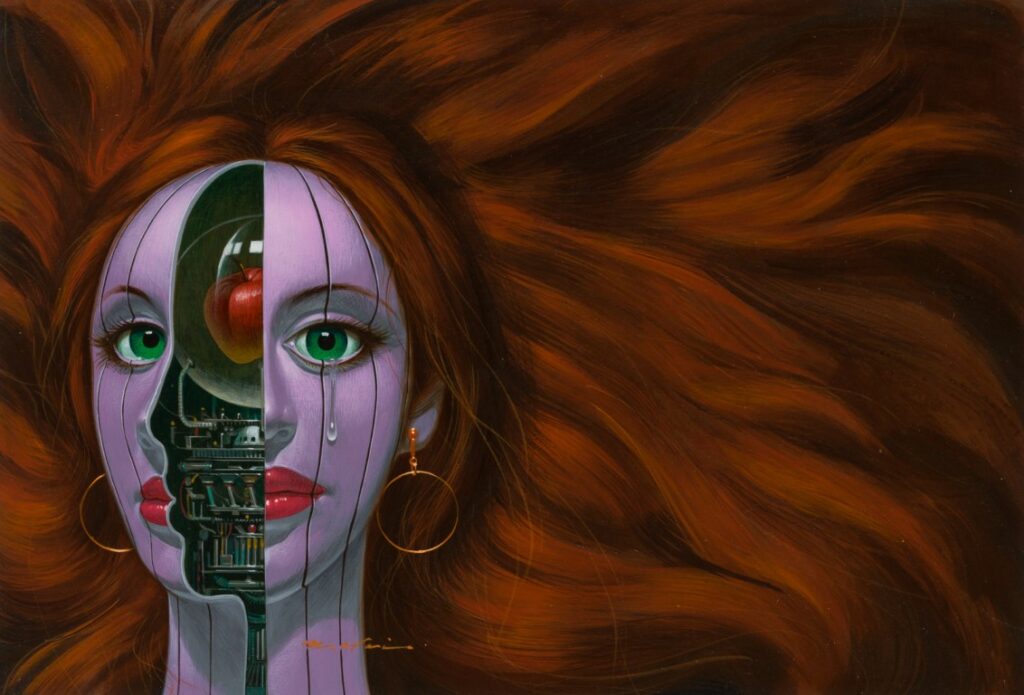 What I can do is perhaps share some of my favorite works. His artwork with Koei Tecmo Games is impressive and a unique area of Orai’s career, since it centered on non-sci-fi elements at their core. His artwork for the book Android Oyuki is one of his less busy yet interesting sci-fi artworks, portraying the face of an Android opening up to reveal the machinery and heart inside. For something more simple yet no less impressive, I can’t express how much I love the black-and-white illustrations he produced for Miyamoto Musashi.

It’s a shame we won’t see any more work from Noriyoshi Orai in the future. Unfortunately, he tragically passed away in October 2015 at the age of 79. With his artwork attached to some of the most iconic franchises worldwide, he may be gone, but he is surely not forgotten.