Konami has been on a roll recently with their PC releases under the Konami Amusement Game Station service. Which was initially only beatmania IIDX INFINITAS, Mahjong Fight Club, and a couple of other titles, the service has expanded to include Sound Voltex III Gravity Wars, Pop’n Music, and Dance Dance Revolution. Sure everything but INFINITAS and Sound Voltex are either open alpha or open beta, the fact that Konami is even planning on offering these arcade titles to players is definitely a positive sign. Now we have another addition to the service and that comes in the form of an announcement that Konami made on their official Nostalgia Twitter. Nostalgia Op.3 is coming to PC via Konami Amusement Game Station. 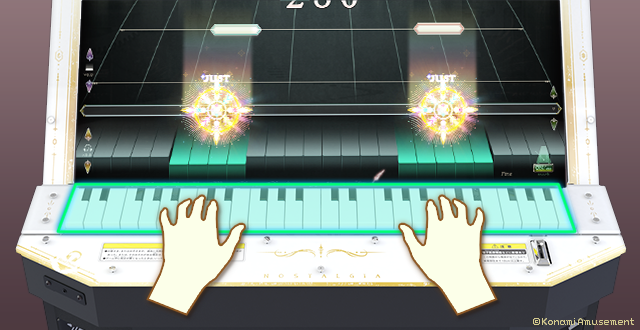 For those of you who are unfamiliar with the Nostalgia series, it is a piano simulation game with gameplay similar to beatmania where notes traverse down the playfield and you have to hit the proper note when it reaches the timeline. The main difference about Nostalgia is that it is modeled after a piano and there are modes that utilize ALL of the keys on the keyboard in front of you. It is a game that anyone can get into but takes an immense amount of skill, time, and patience to truly master.

Nostalgia has grown its fanbase quite substantially since it released in March of 2017, much in thanks to the ever-growing song list that accompanies the game. What makes Nostalgia stand out to me is the fact that even the crossover songs from other Bemani titles are “piano-fied” adding additional piano tracks to the song or completely changing how the song sounded in its original game. Even more than this, the original Nostalgia songs are truly magical and really lend to the experience that the game offers.

Nostalgia Op.3 for PC via Konami Amusement Game Station is available to download now but you will need to have a valid E-Amusement service login in order to play the game. As the game is only in alpha, there are only 6 songs to choose from, and with there being no dedicated controller, you are required to use your top-row number keys to play, but you can definitely get a feel for how the game will play once the title gets its official release which I’m sure will come sooner rather than later.