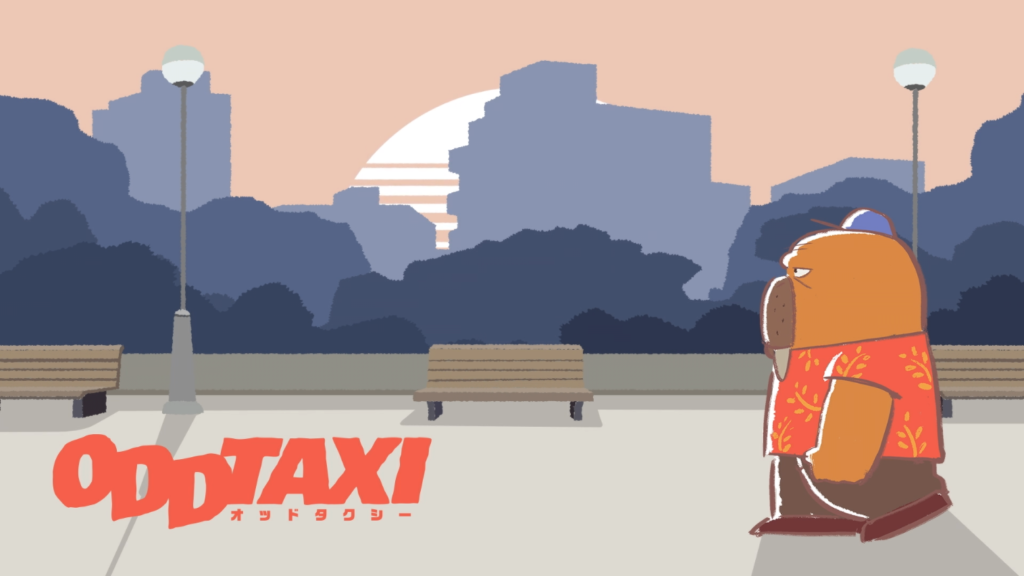 In an industry increasingly dominated by adaptations, sequels, and reimaginings, any and all anime-original projects are worth taking a look at. Already, it seems as if Joran: The Princess of Snow and Blood might become this season’s sleeper hit, but what about Odd Taxi? Boasting a unique mystery premise and anthropomorphic character designs reminiscent of BEASTARS, it certainly had my attention. Luckily, Odd Taxi episode 1 delivers on that.

Almost immediately, the pastel-colored OP sets the tone for a stylish first episode that oozes with atmosphere and ultimately relies more on character dialogue than eye-catching action. Don’t expect to be spoon-fed here: Odd Taxi episode 1 mainly consists of conversations that serve to deepen our understanding of our walrus taxi driver protagonist, Odokawa.

You’ll need to read between the lines as he discusses with a customer, Kabasawa, the idea of going viral, as well as his debate with his doctor Goriki about the role of Bruce Springsteen in ‘We Are the World.’ Later on in the local eatery, his old friend Kakibana stresses that ‘he’s always been strange,’ perhaps stemming from some sort of childhood trauma. This naturalistic approach won’t be for everyone, but gives Odd Taxi episode 1 a whole lot of character and real sense of time and place that goes against the impression given by its cartoonish character designs.

At heart, Odd Taxi is a mystery series, and episode 1 serves to set up several plot lines that will no doubt be resolved later on. The most important is about a high school girl that has gone missing in Nerima City, Tokyo: this is front and center in the series’ marketing, although it’s very clear from just this first episode that all is not what it seems. Odokawa is talking to someone in his apartment at one point, saying, ‘You know you can run away anytime, right?’ This raises the question of whether he is the one who kidnapped the high school girl, and for what reason.

Another plot line is that of the police’s investigation, which places Odokawa under suspicion and sets the oddly aggressive police brothers Daimon and Daimon on his trail. At first, it’s unclear why they’re being so hostile towards him (there’s clearly some sort of history between them) but at the end of Odd Taxi episode 1, we see Daimon the Elder give the data he took earlier in the episode from Odakawa’s dash cam to Dobu, one of the prime suspects in the case. Their motives are therefore called into question, suggesting that this whole thing might just be a whole lot bigger than just a girl gone missing.

Several other characters are introduced in Odd Taxi episode 1: Shirakawa, Taeko, and the idols Rui and Shiho, making it clear that this is an ensemble cast. Immediately, the comparison can be drawn to the likes of Durarara!, which dealt with the criminal underworld in Ikebukuro. Nevertheless, Odd Taxi is a lot more subdued, hardly moving beyond the remit of a simple conversation.

For those that like mystery stories and are willing to stick around to witness a slow burn, then Odd Taxi episode 1 will be a tantalizing introduction.

You can watch the series as it airs weekly on Crunchyroll.