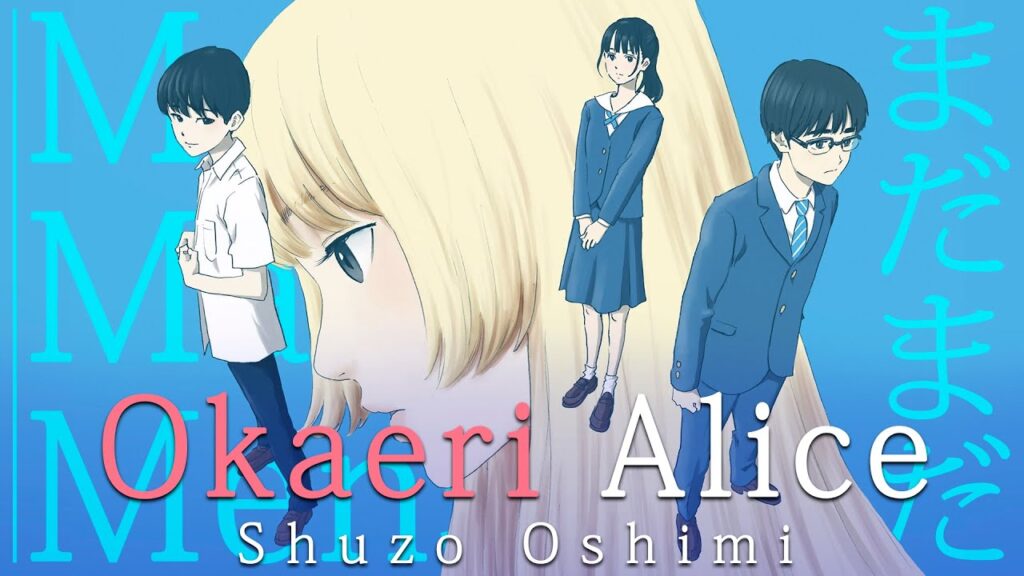 Times have long since changed since Shuzo Oshimi first launched The Flowers Of Evil in Kodansha’s Shonen Bessatsu Magazine, a now cult classic that would turn the author into someone to pay attention to forever. A non-complete list of these changes includes: anime have long since become mainstream, the internet/social media are forcibly integrated into our lives, and visibility towards the LGBTQ walks of life has increased and is at least somewhat more prevalent than before. The always provocative Shuzo Oshimi has taken a personal in exploring the latter before, with the release of his realistic take on the freaky friday body-swap trope Inside Mari. In Okaeri Alice, a 2020 series not yet officially released in English (launched in the very same Shonen Bessatsu Magazine), Shuzo Oshimi more directly attempts to talk about non-binary gender and further his usual themes of sexual awakening. 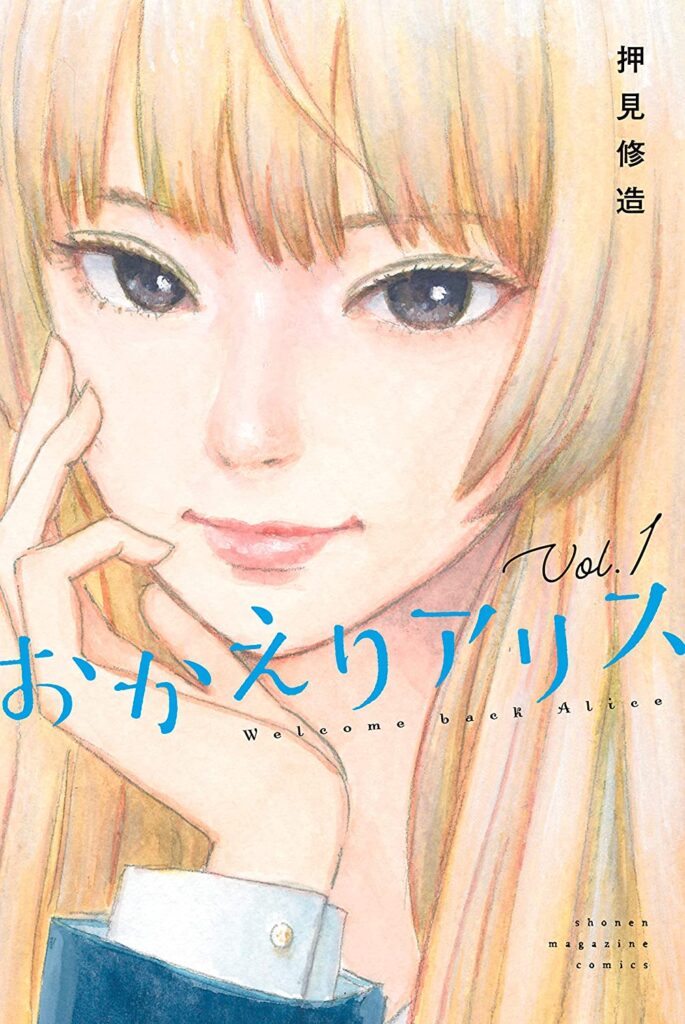 There’s nobody named Alice in Okaeri Alice. Instead, the title points to an early twist in the story when a character who had moved away comes back with a look befitting of the name; ‘okaeri’ literally translating to ‘welcome back’. Their name is Kei (gender-neutral from the start) who during junior high school was pals with the class darling Minami and your typical everyday-boy protagonist You. Their friendship falls apart when You accidentally witnesses a tender moment between Kei and Minami, and before any return to normality can bubble, Kei suddenly moves away… and then three years later comes back, looking like they would be called Alice. 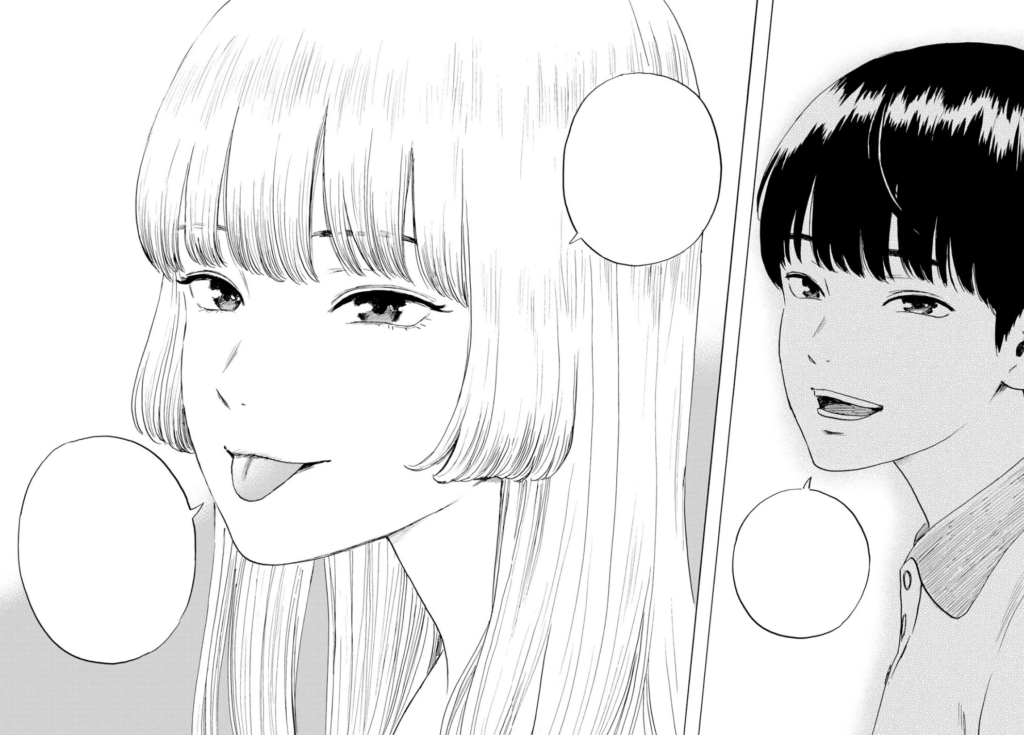 My non-binary ass is going to attempt to explain Kei’s gender nuance with the respect this deserves and deliver an honest assessment of Okaeri Alice’s implementation of a subject much less present in daily life in Japan than in the west.

When Kei gets asked if they’re really a boy or a girl upon their return, they respond by saying ‘I was born a boy, but being a boy has left me’, using some intentionally difficult Japanese with language not typically used in these situations. At a later moment in the first volume, Kei tells You, ‘My being a boy is over, but it’s not that I want to be a woman’. The Japanese language doesn’t use pronouns, but I’m sticking with ‘they’ for now. 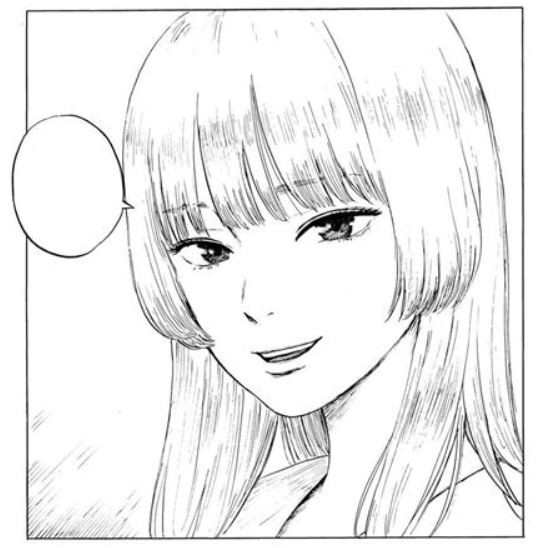 When I first saw Kei’s reintroduction panel, I immediately said in my head, ‘God, I hope the twist in this manga isn’t just Kei’s revealed to be trans for the sake of the twist.’ To my relief, the blonde-haired figure identifies themselves as Kei just pages later, and I appreciate Okaeri Alice taking an upfront approach. Now, Kei never calls themselves a ‘trans-woman’ nor do they use terms like ‘non-binary’ or ‘x-gender’, a term that’s seen some popularity in Japan as of late. With gender being a spectrum, plenty of people who aren’t cis and present in myriad ways may not use the word trans or identify as any prescribed gender. Kei’s also young and the declarative ‘It’s not that I want to be a woman’ might be passing. However, despite my queer empathy, I’m also a cynic and I do wish that Shuzo Oshimi committed a little harder. Then again, this is just volume 1 here and maybe the gender introspection will become clearer as time goes on. 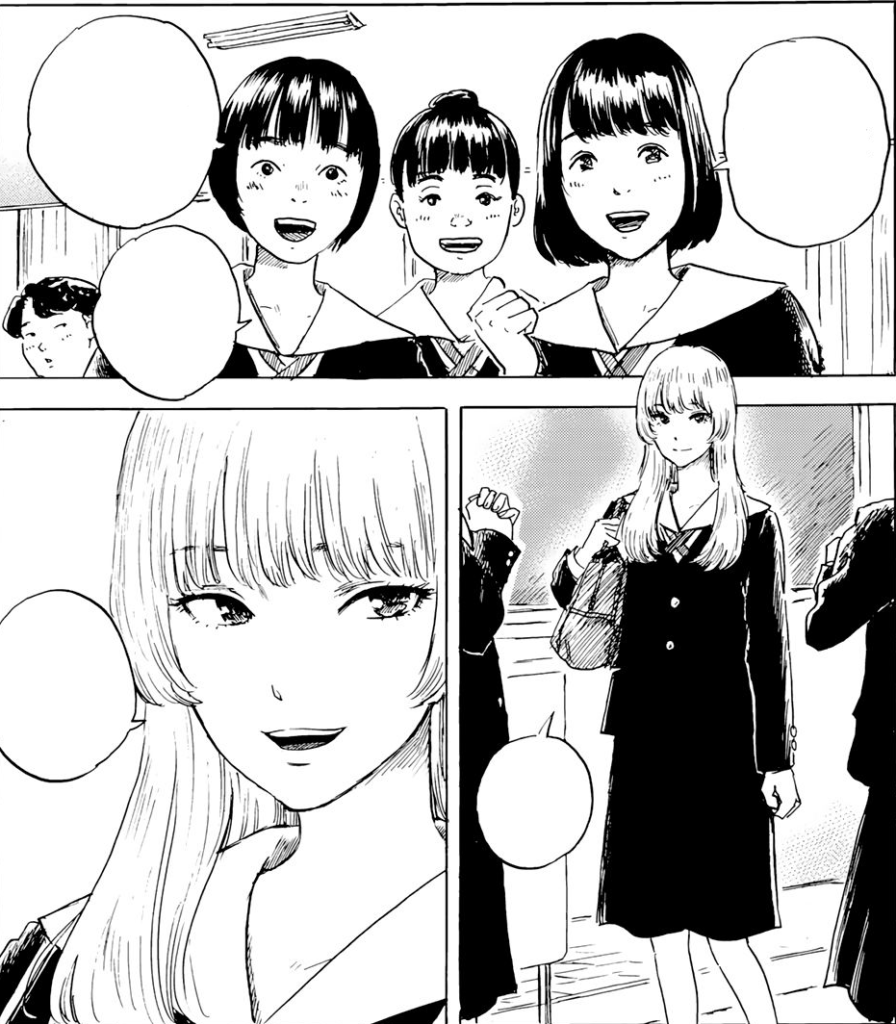 One thing Shuzo Oshimi gets right in Okaeri Alice is not treating Kei’s transition as a huge spectacular. After a brief but well-meaning series of questions from classmates, they’re readily accepted back into the general fold. Rather, it’s not Kei’s gender that makes them an oddity, but their aggressiveness. Before Kei left, they’d regularly talk to You about certain matters those approaching sexual curiosity for the first time might, and it was Kei’s expressions of physical desire for Mitani after she confessed her love for them that pushed away You in the first place. Now that the three of them are in high school, Kei’s now more blunt and deviant than ever. You had wanted to make up with Mitani now that they are in high school, but thankfully for the manga reader, Kei’s more than willing to complicate things. 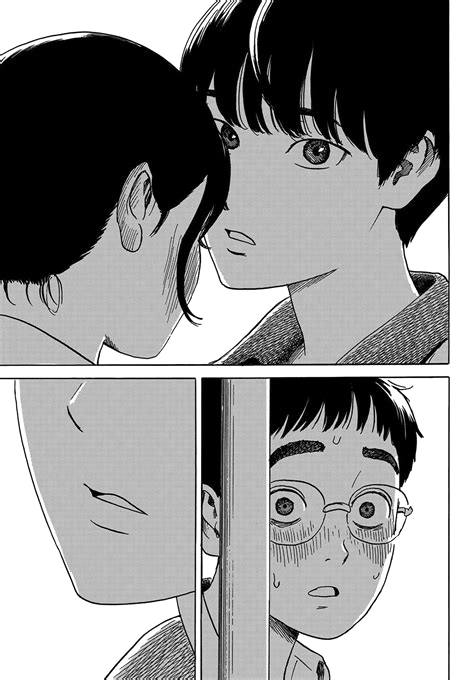 Shuzo Oshimi’s artistic presentations feel stripped down compared to Happiness or The Flowers Of Evil, but that feels intentional at least. The author’s still working on Blood On The Tracks, shaping up to be his best since Flowers as it approaches its climax, and Okaeri Alice comes across as more of a side project. That’s not an insult, as it’s nice to see something a little more laid back; nobody’s destroying classrooms, nobody’s accidentally killing their girlfriend, nobody’s not accidentally killing their nephew. Oshimi’s facial expressions still spark with charm, and his shading techniques make for a very pleasant read on the eyes. Still, at least so far, there’s a lack of initial impact that the best Shuzo Oshimi manga tend to have. 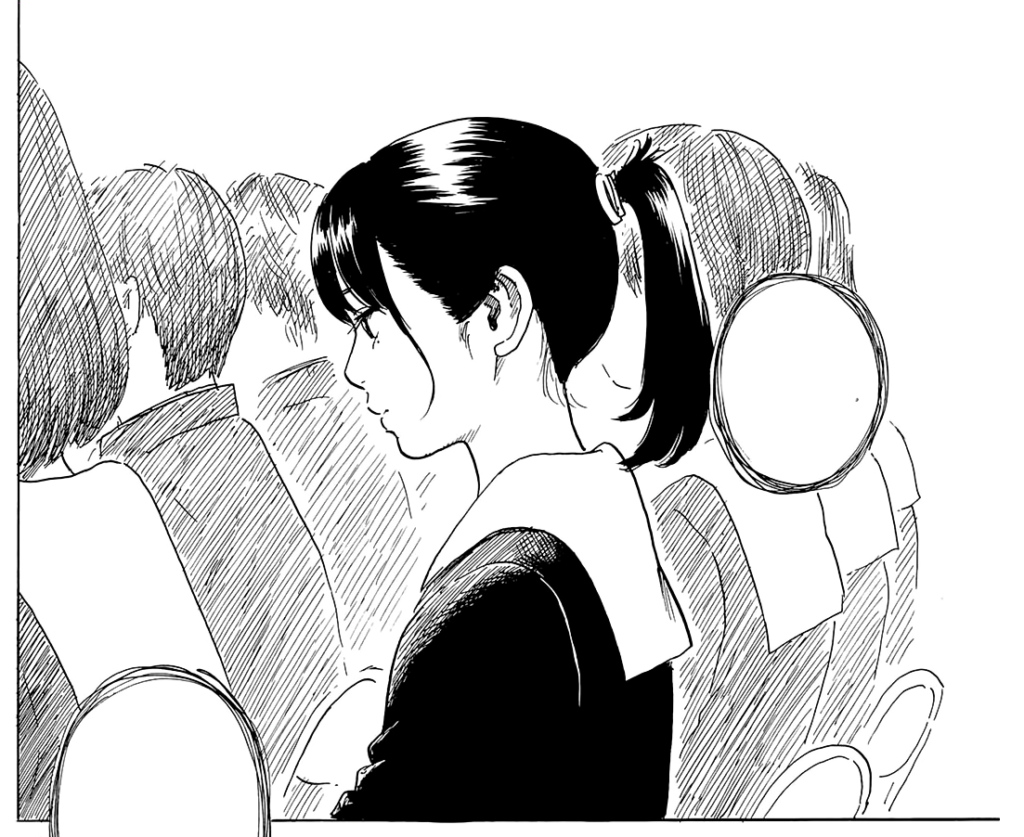 Sliding onto the scene instead of bursting onto it, the first volume of Shuzo Oshimi’s Okaeri Alice makes for an engaging read because of a direction inclusion of atypical gender. However, the brunt of Oshimi’s artistic attention still being focused on the magnificent Blood On The Tracks make this one feel like a B manga. Inside Mari also came across that way, but that still had more bite to it despite Okaeri’s Alice gender angle being more true to life. This one book pooled pages of material with budding adolescent themes Oshimi more powerfully explores in his previous serious, but it’s still his wheelhouse and what’s here does a good job of it in a lighter way. 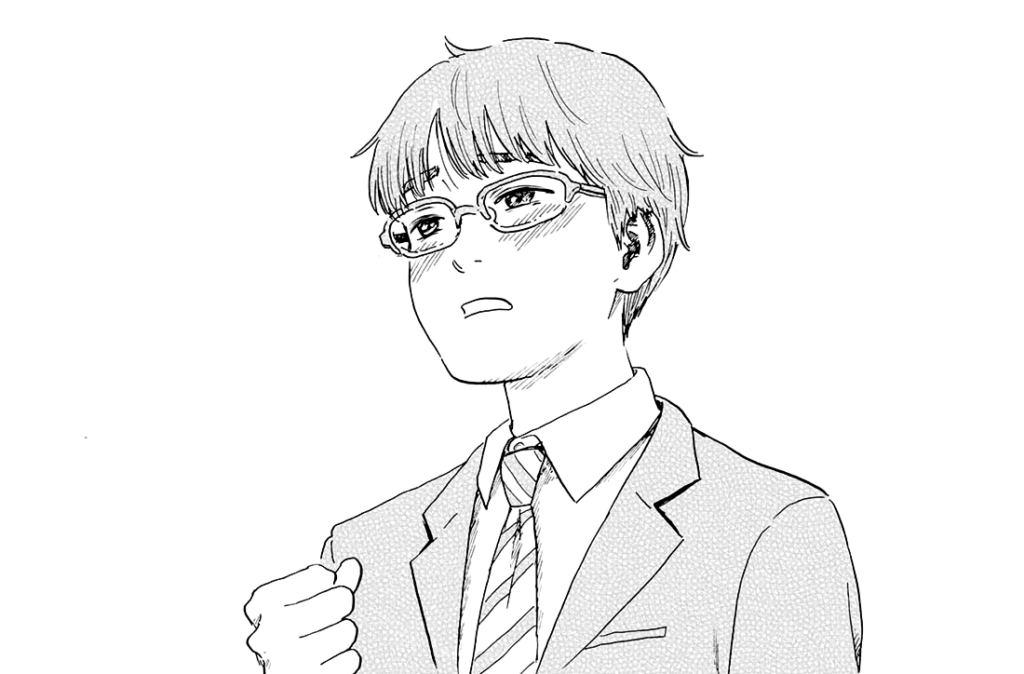 At the time of writing, you’ll have to import Okaeri Alice to read it.