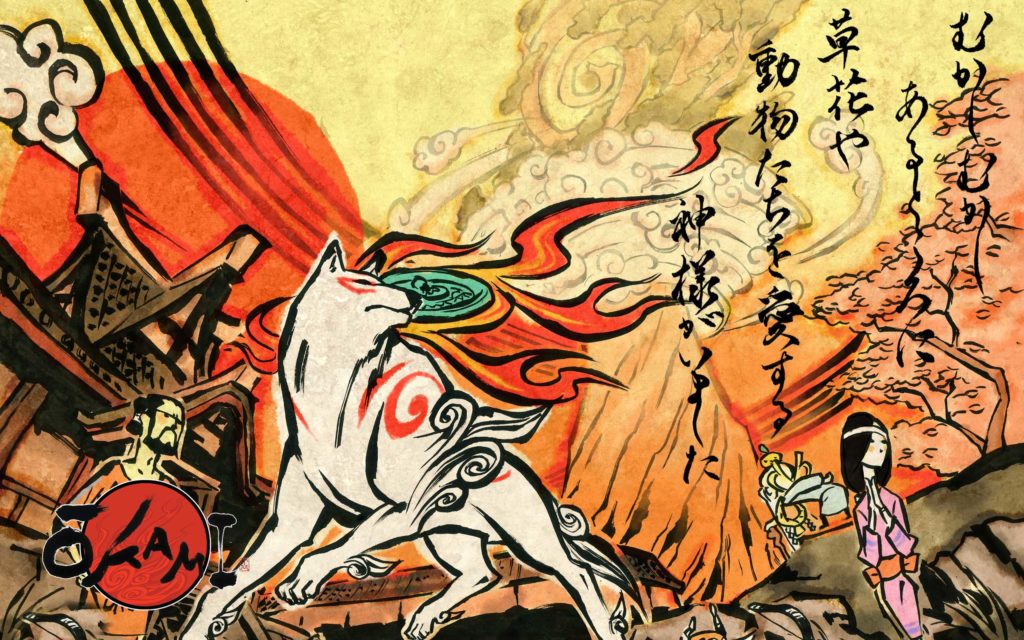 Chances are, you’re familiar with Okami. Even if you haven’t played the seminal Playstation 2 game or one of its many ports and remasters, you’ve probably crossed paths with Amaterasu the white wolf somewhere or other. The game first made waves when it came out due to its beautiful sumi-e inspired traditional Japanese art style that really made you feel like you were running around old Japanese paintings. With tons of charm and wit in the script too, Okami has always been one of video gaming’s most delightful experiences. That’s one reason it gets continually ported to every new console that comes out. The other? Well, with the disbanding of Capcom’s sub-studio Clover Studios shortly after the release of the game, aside from one DS outing the game has never had a proper sequel. Long-time fans may finally be getting their wish as notorious Platinum Games head Hideki Kamiyama, the game’s original director, and Ikumi Nakamura , who also worked on the original and has become rather well known recently due to her former involvement with Ghostwire, are directly teasing more.

Okami is going to be back! We want to make Okami sequel and fans are looking forward to it too. You guys want to see Kamiya’s Okami again, right, everyone? I want to work on it too! 大神をまた作りたい私たちです。🙏😊@CapcomUSA_ @OKAMI_CAP pic.twitter.com/bLwuGnTew1

About a week ago Ikumi Nakamura tweeted out this video of her and Kamiyama saying ‘Okami Will Be Back. The internet screamed in delight; Finally, god would be returning to his heaven and all would be right with the world. If we actually do get a modern sequel or reimagining, it wouldn’t just be Capcom farming the IP and hiring developers who had nothing to do with the original to churn it out. Here we have the series creator, one of gaming culture’s most beloved figures, saying he wants to work on the title. With Nakamura’s assistance no less, it’s truly a best-case scenario. Now there’s no official trailer or announcement or anything like that, but I believe Kamiyama and Nakamura wouldn’t be tweeting a video like this out and tagging Capcom directly if they weren’t teasing something genuinely on the horizon.

What would a new Okami actually look like though? Would it just be more of the same? On some level, we’d assume it just be a bigger and better version of the original with a new story. That’s really all anybody has ever really asked for. We want to run around some forests with plants sprouting at our paw-tips as we jump around from one lushly illustrated rock to another. We want to break a bunch of pots in a small farming village as a Kimono clad woman who had a bit too much sake to drink starts yelling at us. We want to blaze through a bamboo thicket as we swish our ink brush to cut a clean path for us. The one thing I’m not sure if we want or not is just to press the same button over and over and over again to hack and slash our way through enemies. 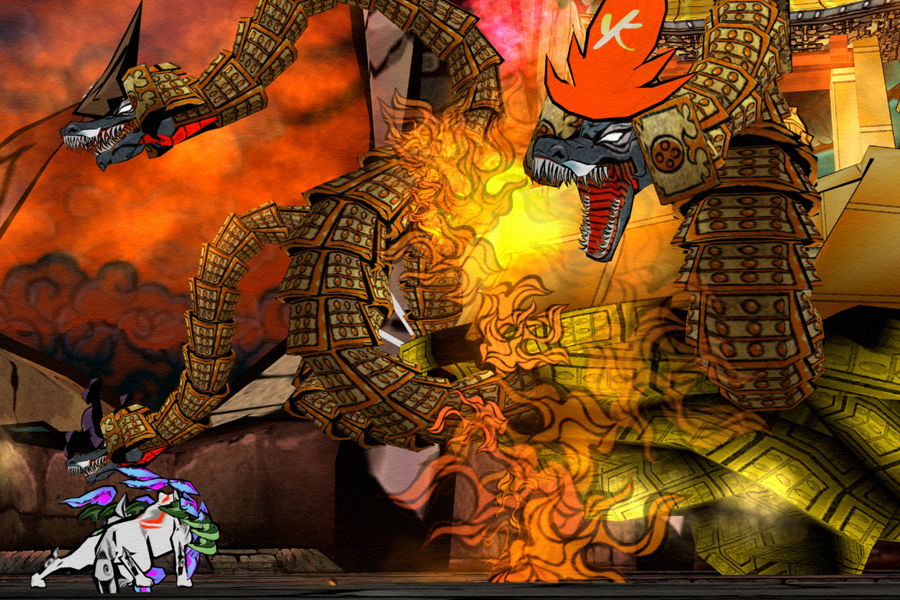 My biggest concern about a potential sequel to Okami, although not one so big that I wouldn’t happily give the game a shot, is that it would be a glorified PS2 game. Repetitive game-play and dungeon crawly, now I’m going to make the tired by necessary comparison to The Legend Of Zelda; While we may argue which in the Zelda series is our person favorites or the most charming, there’s no denying Breath Of The Wild has the best mechanics and game-play in the series. Perhaps, of an action game ever. There are so many ways to approach battlers and get from point A to point B. The series has thankfully moved past its Ocarina and Windwaker days of just going to an enemy and slashing it to get by, maybe switching out weapons once in a while.

For new a new Okami to be truly successful and worthwhile, I think it’d need a similar leap into a more expansive world and deeper game-play. On the first point, the game could very easily translate into an open-world structure. I’m not the type that thinks every game should be open world just because they can, but when the original game pretty much was open-world except for loading points between one area and the next it only makes sense. Getting to explore gorgeous environments uninterrupted swimming in Japanese paints and inks at your leisure is one tangible way the Okami experience could be built upon. We doubt they’re going to change up the game’s signature style, but they could do even more with the world and the look with current generation hardware and processing power.

The bigger challenge here is what could be done with the combat. Fans probably wouldn’t complain if the battle system was more or less the same with maybe a few additional combos, techniques, and brush abilities. People really do just want more Okami after all this time and if they got exactly that, I doubt they would complain. It would be such a huge missed opportunity though. It’s not like I’m a game developer and have all the magic answers here, but I do want to see something more dynamic. Sure there’s always room for additional and new kinds of weapons that you could implement some system that allows combat to unfold in a variety of different ways. With a bigger environment too, there’s ways you could make the landscape and what’s on it more than just a series of connected platforms to jump on and off of. There’s one more aspect to the game-play though that could most benefit with additional nuance. 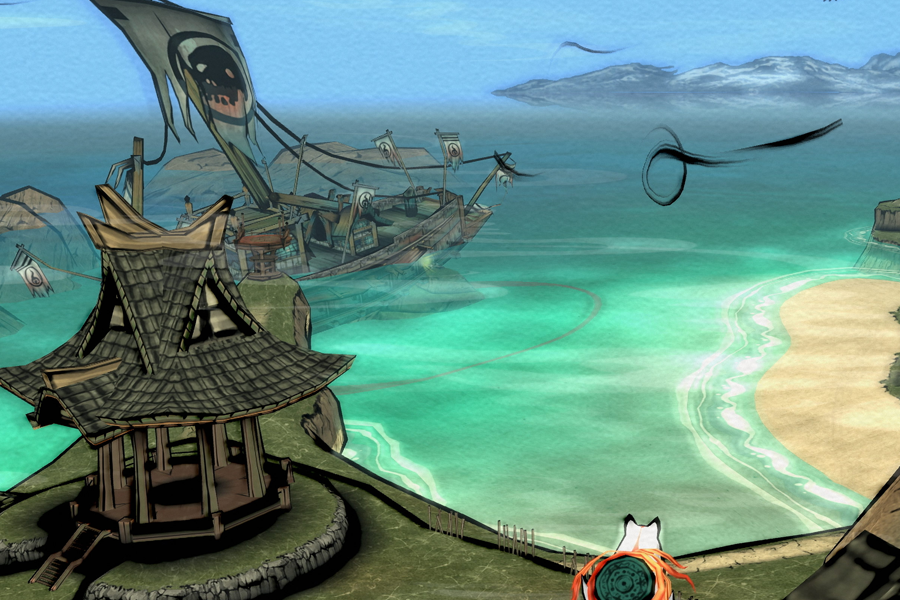 The Ink Brush. In Okami it’s always fun to doll out but you mostly use it to just do basic cutting attacks to baddies and draw the right stroke at the right roadblock. Due in large part to the limitations of that era, but there’s no real versatility in how you can use the ink brush. In combination with more complex environments, a wider variety in how weapons attack, and more advanced enemy AI there’s real potential to make the ink brush a more dynamic part of the game! Maybe you’re able to create different kinds of objects and structures that you’re able to use as you see fit. Possibly you can mix brush stroke attacks and weapon attacks for more combat options. Distract the even spirits with wind or rain and attack them from behind! The possibilities are endless as they say.

Ultimately, I’m very excited about the potential Okami 2. Kamiyama knows how to make video games that are still wholly unique and fun experiences removed from a lot of the repetitiveness we see in Triple-A gaming now. With current-generation hardware, the franchise’s traditional art style could look more beautiful than ever and people are certainly interested in returning to it. As I said, the big, if that sticks out in my mind, is the possibility of a sequel/reimagining being a Playstation 2 game at its core. It wouldn’t stop me and hundreds of thousands if not millions of other people for delighting in every second of the experience, but knowing that there’s potential for so much more, I’d be disappointed. I’m not saying we need Okami 2  to be Breath Of The Wild with a wolf but I would like to see a more evolved game.

Again it’s not like a new entry has been formally confirmed but with Kamiyama and Nakamura’s direct teasing, something going to come out of this.