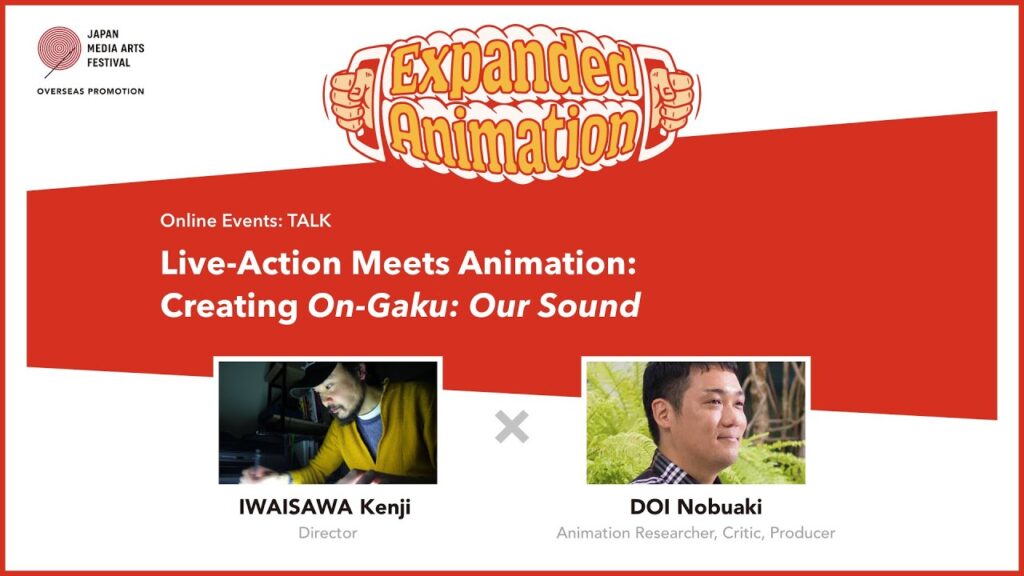 With Annecy Film Festival now underway, beyond the world premieres and in-competition films vying for a grand prize are an array of online panels and showcases diving deep into the world of animation. We plan to highlight a number of these Annecy Film Festival 2021 talks centered on the world of anime and Japanese animation, including a recent talk undertaken with On-Gaku: Our Sound director Iwaisawa Kenji.

The talk with Iwaisawa on On-Gaku was released independently of Annecy Film Festival 2021 as an additional panel related to the Japan Media Arts Festival’s Expanded Animation showcase. Expanded Animation aims to showcase not just the best animation coming out of Japan, but animated projects that maybe don’t fit the traditional anime mold. On-Gaku recently won an award at the 2020 Japan Media Arts Festival for its impressive animation produced independently of the studio system, and this Annecy talk with Doi Nobuaki, an animation researcher, critic, and producer, dove into the production of this award-winning movie.

On-Gaku is unique for being produced independently in a country where few such feature-length productions are made. Indeed, this was a grueling 7-year process, and was made with over 30,000 drawings by taking advantage of a technique known as rotoscoping. But why produce an anime using such a method, rather than creating the film using CG animation or traditional methods? This was due to Iwaisawa’s experience in the live-action film industry.

‘When I was around 18, I joined the film industry and started working under legendary director Teruo Ishii [known for film’s like Blind Woman’s Curse and Yakuza Law],’ noted Iwaisawa. ‘I got involved in the making of live-action films and wanted to be a director in this segment, and I did make some live-action films on my own, but I felt it didn’t suit me and that they weren’t fun. A long time back, in my childhood, I liked drawing pictures and manga, so that drew me to animation. I just wanted to try it out of my curiosity, but I felt that if I stayed in the live-action segment, I wouldn’t have been successful. I had no idea how to create animation, but I thought it would be alright if I traced or stuck with what I knew from live-action production.’ 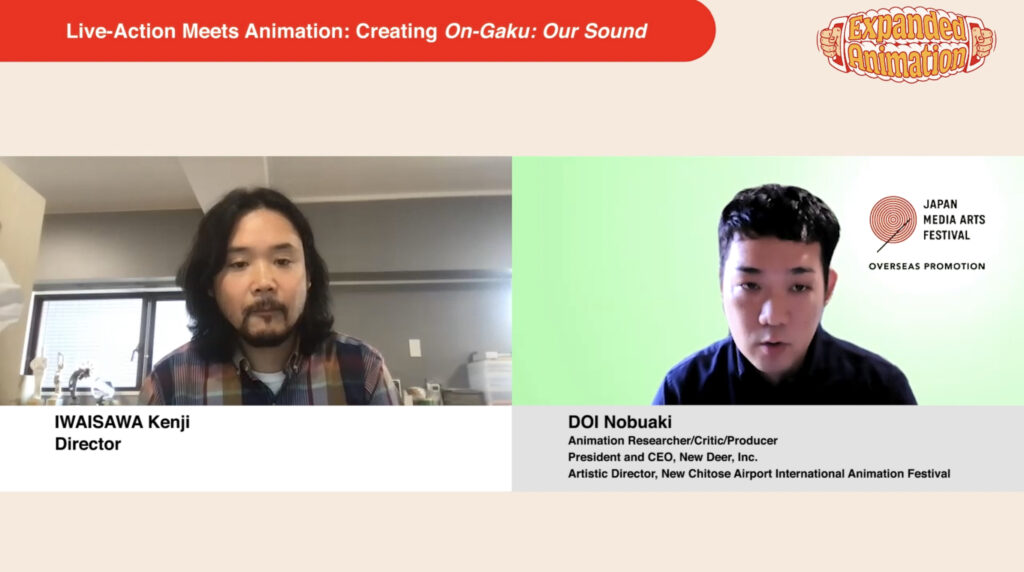 While this technique is known as rotoscoping and has been used for films around the world for as long as animation has existed, Iwaisawa’s lack of knowledge of the industry meant that he didn’t necessarily understand much about rotoscoping or the industry before the film. Although On-Gaku was the director’s first feature animated project, it wasn’t his first animated work. It was after submitting a short film to an independent animation film festival (where he also learned about rotoscoping as a technique) that he determined that continuing to work on small-scale short films in either medium wasn’t going to allow him to achieve what he joined the industry to be.

But why adapt a manga like On-Gaku? Well, part of that comes from Iwaisawa’s close friendship with the original mangaka, Ohashi Hiroyuki. ‘We used to have the same part-time job and we still live nearby, so naturally we became friends. His manga works are quite interesting but also rather simple, while his drawings offer a lot of space where I could put something in when making his work. When animation is made more popular works are traditionally chosen for adaptation, but I decided to make this on my own so I could do whatever I wanted to do, and since we were friends it made things easy.’ 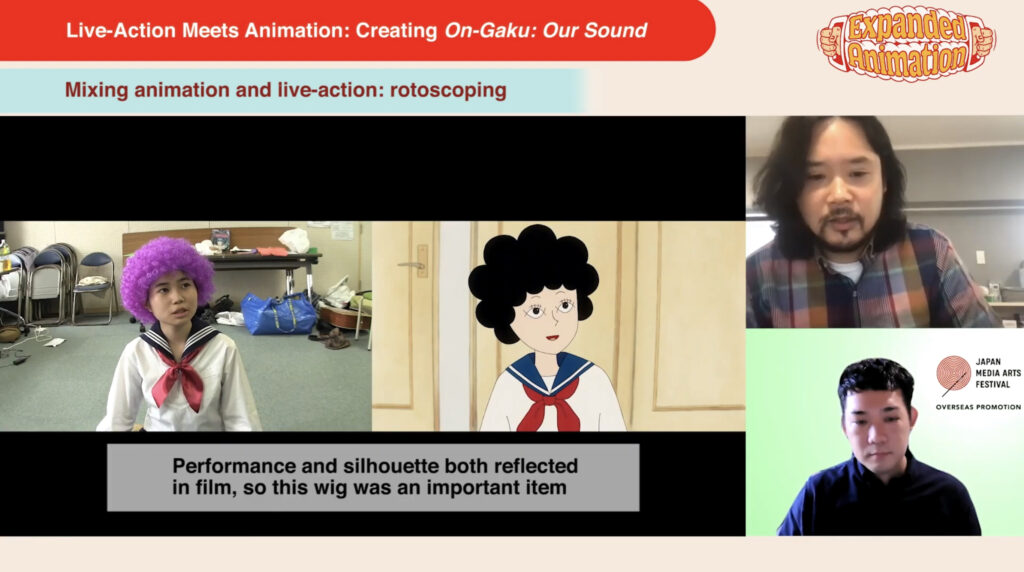 It’s from here we get to see some behind-the-scenes work of the original live-action recorded footage before the film was turned into animation. Although the shooting wasn’t on location and took place in just a single room, you can see how closely the live-action performances of the professional actors are reflected in the final animated work.

As Iwaisawa explained, these recordings formed the basis of his work but still offered the chance to be more creative in the animation process. ‘Recent animated films using rotoscoping are far similar to the live-action footage, but On-Gaku uses characters from the original manga. On the other hand, I wanted to follow the movement of the characters from shooting so I struck a balance between the two.’

‘We shot the film in a community center, and since we only had to shoot the performances that was enough,’ continued Iwaisawa. ‘I prepared the storyboard for shooting on location, and I observed how the actors took on these roles and rearranged the camera work to support this.’ 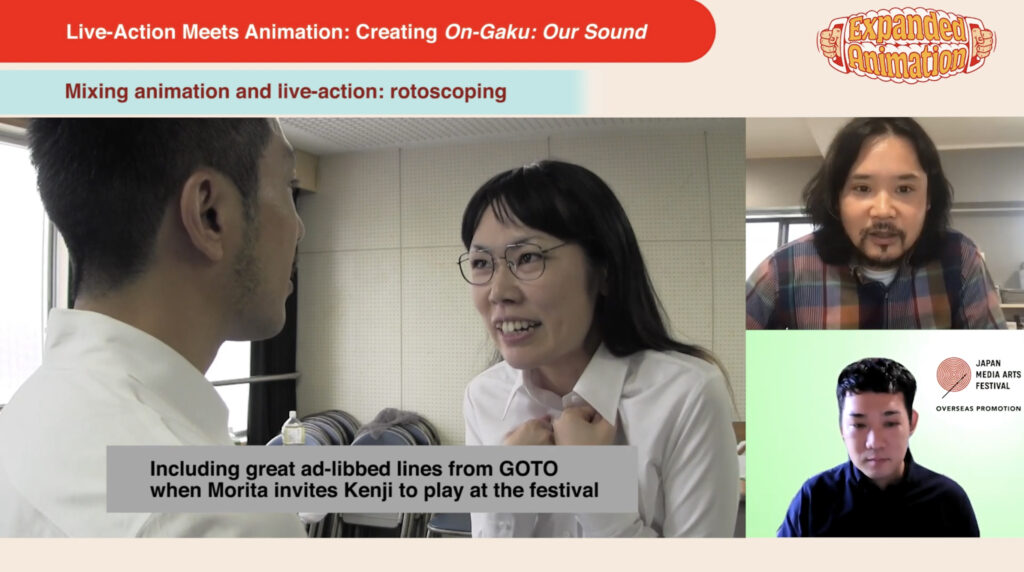 This approach to shooting and animation also helped to keep costs down and increase efficiency which is needed when working independently and on a small scale. On-Gaku was showcased at Annecy Film Festival in 2020 and is one of a slate of recent examples of rotoscope independent feature animation from around the world that includes the Annecy award-winning I Lost My Body from 2019. It’s continuing the development of a style of animation independent of that pioneered by the likes of Disney and major worldwide studios.

The budget savings were particularly important for Iwaisawa, however. Indeed, financing was the biggest hurdle throughout production. ‘I was appealing with people that this would be a lot of fun to get people on board. If it had not been for social media and crowdfunding, this would not have been made.’

‘Usually when we start, we make sure we have financing or funding for filmmaking, but because this was done independently, we started something we could do with a small amount of money with team members who could share the financial burden if necessary. We worked in a co-operative manner and lacked money for a lot of the production. When we got 4 million yen through the crowdfunding campaign I thought wow, that’s a lot of money. We were lacking money for the whole time.’

Overall, the production costs for the movie were roughly 15 million yen, which doesn’t include Iwaisawa’s labor for seven years. 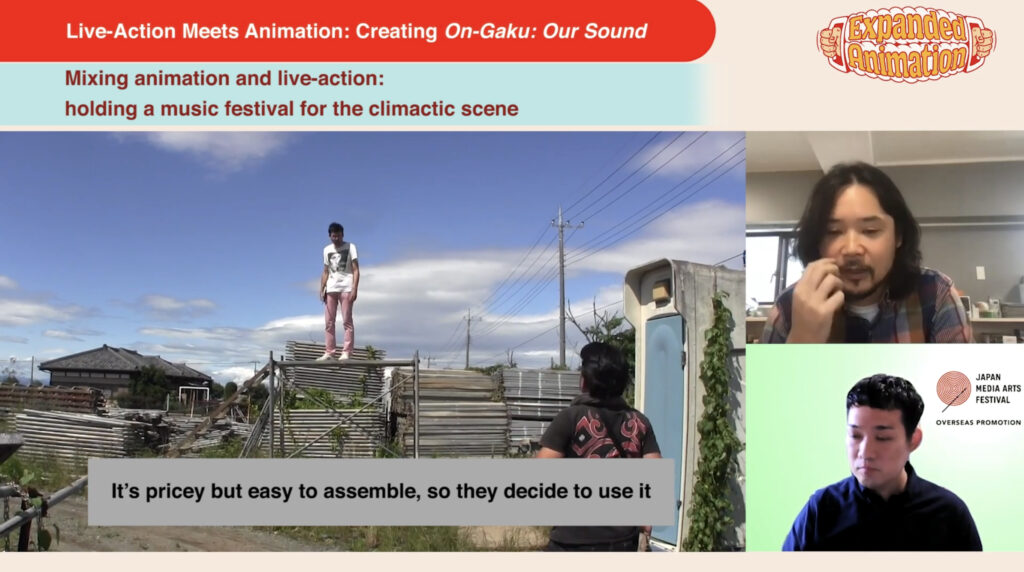 The highlight of On-Gaku comes in the final act when the band performs at a film festival following the encouragement of others. Amazingly, they staged a real-life music festival for this scene. ‘In the world of indie filmmaking, especially in live-action, I’m exposed to lots of people from independent cultures who have a trait of putting their wildest ideas into practice. They have no money, but let’s do it anyhow. When I know there are people with this level of passion, I thought they’d find my idea of shooting an anime scene with real audiences and a real festival interesting. I worked through my connections and ended up with a town called Fukaya in Saitama and we managed to put the event together.’

Especially in the wake of On-Gaku’s worldwide success, it’s a validation of a creative vision many years in the making. It achieved his vision as a director at long last. ‘When I was 20, I was imagining myself as a fully fledged movie director in my 30s. However, when I hit 30, I’d already made some short animation films, but I was far from the image I thought for myself, so as a creator I wasn’t really there yet. I thought I really had to do something big to catch the wave, and making a feature-length animation was that. I was 30 or 31 when I started working on this, so I decided to dedicate my next 10 years until I was 40 on this. It was a gamble, but I thought I’d give it a shot, and if it didn’t work or no one cared I thought I could accept the reality whatever it was.’ 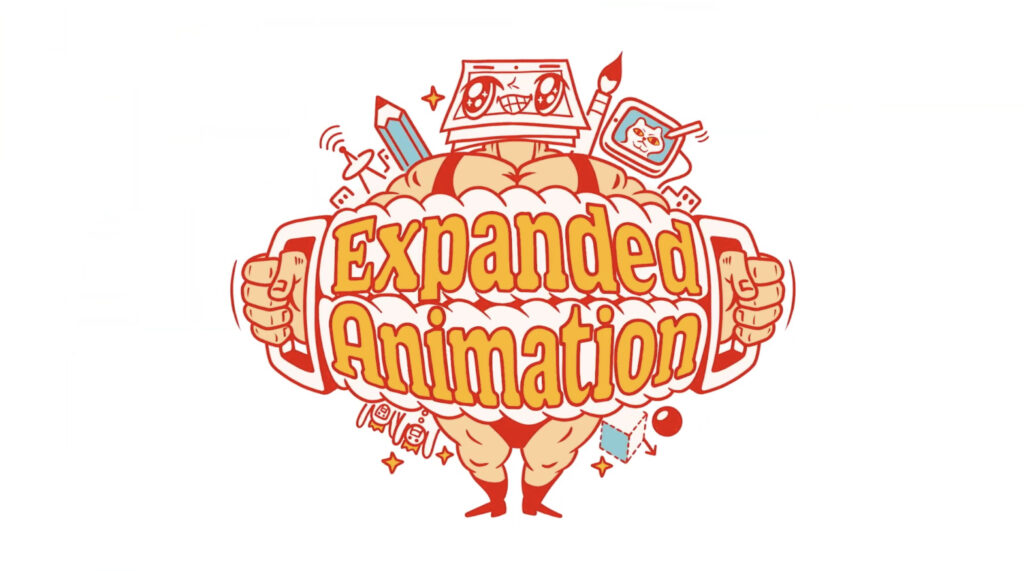 Following this year’s Annecy Film Festival, what’s next for On-Gaku director Iwaisawa Kenji? Well, at the very least, it’ll be another animated feature, but not a solo-animated project like this was. ‘I’m starting to make a pilot version. This time I’ve set aside a budget and recruited professional staff and take a relatively formal approach. For this one it’ll be closer to my own touch, and once the funding is raised I’ll be ready to start the production at a full scale.’

This is a one-of-a-kind anime project as a rare example of a feature-length Japanese animation produced outside of the studio system. If the aim of the Japan Media Arts Festival at Annecy Film Festival 2021 is to showcase ‘Expanding Animation’ and broaden the idea of what is possible in Japanese animation, what better work to showcase this than On-Gaku.