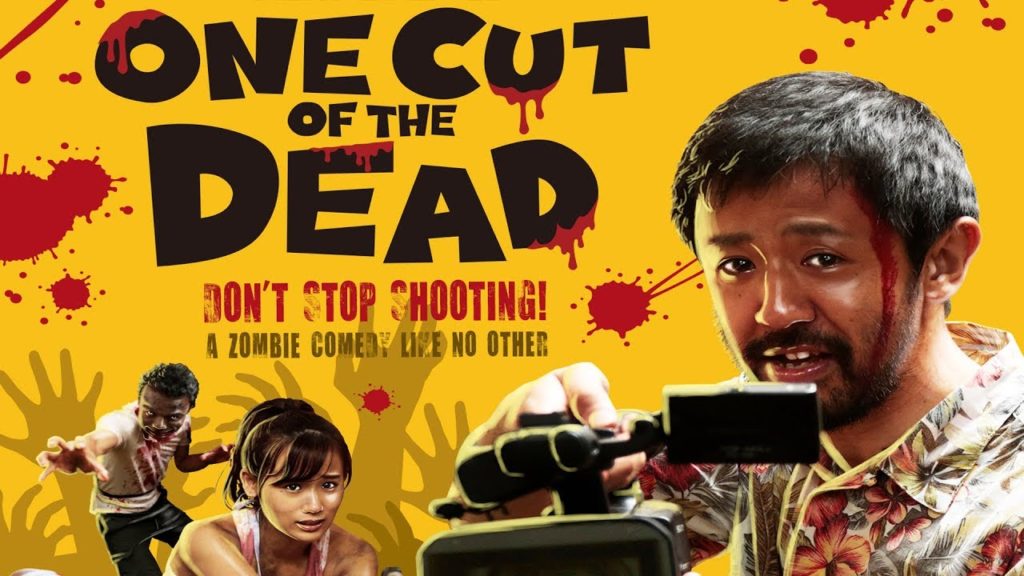 I need to start off this review by saying that it’s incredibly difficult to give an honest review of the movie without spoiling the surprise that ends up making it such an amazing experience. To be entirely honest, the fact that I’m so concerned about not spoiling the movie for you should be just as much of a sign that it’s worth watching as the rest of my opinion as laid out in this article.

That being said, Shinichiro Ueda‘s One Cut of the Dead or Kamera o Tomeru na! (Don’t Stop the Camera!) is one of the most remarkable movies I’ve seen in quite some time. I had heard about it in passing last year because of its incredible success story (which I’ll get into in a moment), but it recently was brought to my attention again when director Edgar Wright (Shaun of the Dead, Scott Pilgrim vs. The World) tweeted its praises in light of a recent theatrical run in the UK.

Always nice to see a horror comedy do something a little different and I was delighted to discover mid way through ‘ONE CUT OF THE DEAD’ that it was a zombie film mixed up with Michael Frayn’s play ‘Noises Off’. Super funny and super sweet. Deserves its monster success. Do see! pic.twitter.com/GJl5qxE2wa

So I mention that the film is a massive success, and that isn’t even remotely an understatement. The film was produced for 3 million yen, about 27,000 dollars, which is a paltry sum for a movie. Most movies now cost millions even on the low end, with massive blockbusters costing hundreds of millions. With such a small budget, this movie is definitely what you would call an ‘indie darling’. Add that the movie only opened on two screens in November 2017 during its initial run and it should be considered amazing that the movie is on anyone’s radar at all. The turning point for the movie was its submission to a number of significant film festivals shortly afterward, which led to a larger theatrical run in Japan that ultimately earned the movie 3 billion yen in the box office.

One Cut of the Dead is often mentioned as a ‘Horror Comedy’ or ‘Zombie Comedy’ film, which is something that I feel is actually pretty misleading. Where the first 37 minutes of the movie is a single shot zombie film (an absolutely impressive feat, mind you), that portion of the film is played completely straight and to some degree comes off as though they’re setting up a serious horror film.

The story goes that a director wants to create a zombie movie, and the location that he chose happens to be the former site of military experiments to raise the dead during World War II. After a few moments watching the cast in the process of filming, things start to take a turn for the worse with actual zombies appearing and attacking our protagonists. What entails is a series of typical zombie movie tropes, some seriously shaky/amateur-looking camera work, and a rather well executed ending crane shot.

This is where things start to take a turn for the comedic and also become really difficult to discuss without spoiling the experience. The latter half of the movie is more of a recap, detailing the process of how this zombie film came to be made and why the events within turned out the way that they did. You get to meet all the players of the story in a more natural setting and get a better understanding of the dynamics that play out during the first 37 minutes. This is where the comedy comes into play, watching the different members of the cast interact with one another and all the things that led to what you just saw. It’s a really interesting way to structure a movie and actually pays off in an extremely satisfying way when everything is said and done.

The payoff is where I have an issue with calling it a ‘zombie movie’, because I feel like that kind of label might be enough to turn people off from watching it. Ultimately, the horror element of the film is pretty mild, and while I’m saying that from the perspective of someone who loves horror films, I truly think that it wouldn’t be a hard watch for anyone. It’s not structured like a typical American horror film, there are no jump scares, and the gore is a lot less graphic than what western audiences might be accustomed to. It still remains an absolute joy to watch, and for fans of serious horror movies, there is still a ton about the movie for you to love.

One Cut of the Dead is still unfortunately not available in the United States. Its venture into the west has begun in the UK thanks to Asian film distributor Third Window Films. The movie is currently playing at several theaters around the UK through the beginning of March, and a Blu-ray of the film was released in late January. Fortunately for fans in the United States, this Blu-ray release is region free and can easily be ordered through Amazon! I purchased the it myself just so I could do this review and it was pretty painless (and affordable).

I still hope that the movie makes its way to North America in the near future because it’s not only a remarkable film in its own right, but it’s something I honestly think everyone should take the chance to see if they have it.