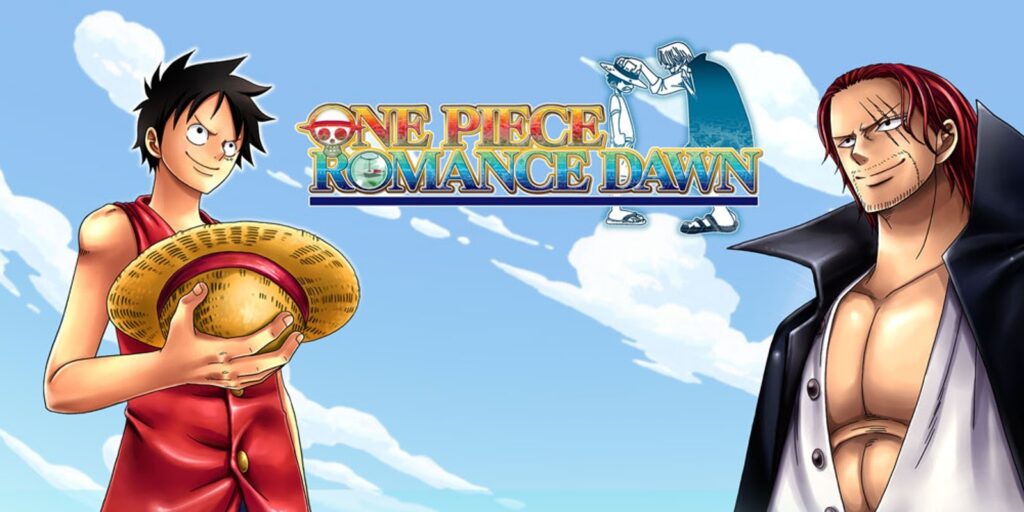 Many things in the long-running One Piece manga and anime universe are named Romance Dawn.

Unfortunately, it is also the name of a One Piece video game.

It makes sense that an anime franchise which has been around for 20 years would have a lot of video games, especially since the franchise in question is a shonen action-adventure series featuring pirates. The format should lend itself very easily to video games.

One Piece is also a popular series, so game makers have a strong incentive to ride that wave of pirate popularity to profitable gaming treasure.

As a result, there have been many One Piece video games for many different formats. By one count, there have been 44 One Piece games, but it depends on if you count sequels and ports separately or all together as a group. Many of these games were also exclusive to Japan.

There have been role-playing games, fighting games, platform/ puzzle adventure games, action-adventure games and even a Mario Party-style party game with One Piece minigames. (We haven’t even mentioned One Piece Monopoly or One Piece Uno.)

The first One Piece video game was called One Piece: Become the Pirate King! It was an RPG featuring cards. It came out in 2000, just a couple of years after the manga started and during the middle of season 1 (first 61 episodes) of the anime. The game was designed for the WonderSwan, a grayscale handheld video game console by Gunpei Yokoi, the same man responsible for the Game Boy.

The most recent One Piece game is One Piece: Pirate Warriors 4, which came out on 27 March 2020.

One Piece: Romance Dawn – The Basics

Chronologically speaking, One Piece: Romance Dawn sits somewhere in the middle of all that. It was released in Japan right before Christmas in 2012. It didn’t arrive in North America until a limited edition Gamestop, Club Namco and EB Canada release in 2014.

Romance Dawn is an RPG. It is based on the beginning of the manga and anime series, from the East Blue Saga to the Marineford Arc, when Luffy is trying to rescue Ace from the Marines. If you’re watching One Piece at Crunchyroll, the Marineford Arc is halfway through the Summit War (episodes 385-516) section.

Put another way, the game takes us from 1999 to the middle of 2011 in the anime, which sounds like a lot to have to cover. However, it does skip over Skypiea, Loguetown, Whiskey Peak, Little Garden, Jaya, Sabaody Archipelago and Amazon Lily.

The player controls Luffy and his pirate crew as they travel from place to place and fight their way through miscellaneous Marines and other villains. Boss battles include Buggy, Mihawk, Arlong, Crocodile, Rob Lucci, Oars, Aokiji and Akainu.

The game uses a lot of cutscenes, assuming you don’t skip all of them. There are more than 20 minutes of them before you get into your first fight with the Marines.

Some of these cuts are animated, and appear to be taken straight from the anime — some of these were apparently made for the game. But the majority are static, with no voice acting. One Piece characters pop up as talking heads in little square boxes, against a background from the anime. They talk via cartoon word balloons.

These cutscenes could be described as manga-esque, but they also look cheap. Maybe if Romance Dawn was an interactive romantic visual novel or dating sim, the scenes would be acceptable.

‘Static images of characters spout ceaseless, terribly written dialogue, the shaking of their avatars to distinguish which person is speaking the only animation used in these bland exchanges,’ wrote Robert Hughes in NintendoLife.

The cutscenes weren’t the only problem. Reviewers also called the game bland, and complained about the repetitive exploration. The game received a 42 percent score on Metacritic.

Kallie Plagga at IGN called it ‘a weak game that mangles its beloved source material,’ and added that ‘knowing that a better-animated version of the same story exists made it seem pointless.’

If the Romance Dawn game has a silver lining, it’s that the game apparently did well enough to encourage gaming company Namco Bandai to bring more One Piece titles to the United States. 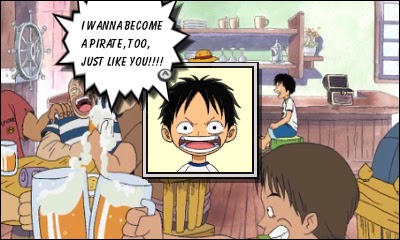 Romance Dawn in One Piece

The main character is still Monkey D. Luffy, who looks about the same as usual. At the beginning of the story, he spots a pirate ship and sails toward it.

The ship belongs to the pirate Crescent-Moon Gally. As the ship approaches a coastal town, the people panic — only for it to be revealed that Luffy has somehow defeated Gally. Luffy heads into town, looking for food. Luffy wants to be an adventuresome pirate, not the looting and plundering kind.

We also get a flashback involving Luffy and Shanks which is similar to the first chapter of One Piece. Back in the present, Luffy leaves town and begins his adventures as a pirate.

A version of the story would be animated as One Piece: Romance Dawn Story in 2008. The story is a very loose adaptation, which takes place after the Thriller Bark Arc.

About a month after Version 1, Oda created Romance Dawn, Version 2. The story is very different from Version 1. Luffy meets a girl named Ann, who was captured by Spiel the Hexagon, a pirate captain who can use witchcraft.

Luffy and Ann fight the pirates, and Ann ends up rescuing Luffy. In this version, Luffy’s grandfather was a pirate.

Version 2 was animated as an episode of One Piece, titled 20th Anniversary! Special Romance Dawn. This version is also Episode 907 of the anime, which it is stuffed into the middle of — but is not part of — the current Wano Kuni (Wano Country) Arc.

Unlike the animated version of Version 1, Special Romance Dawn follows the story of the manga original fairly well. The story takes place in an alternate universe.