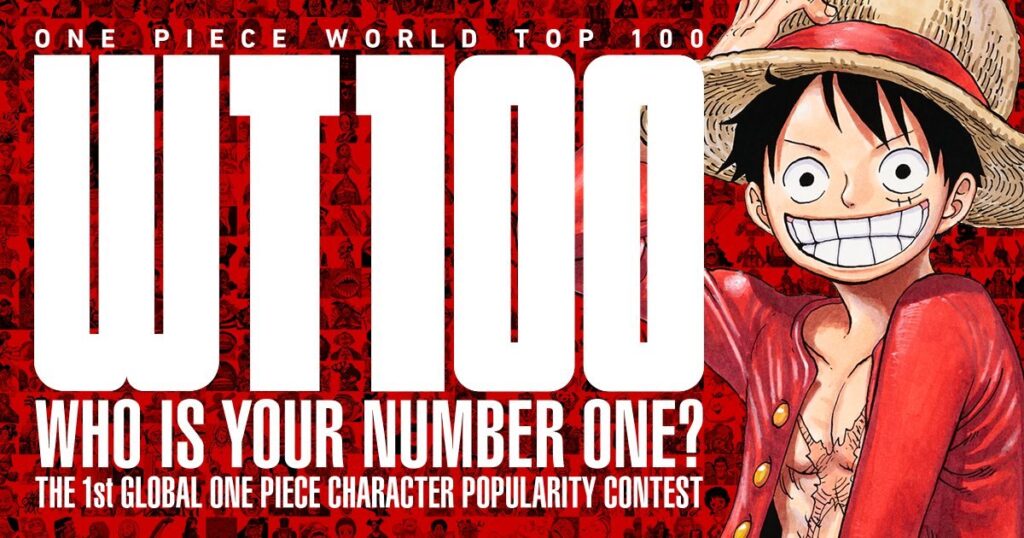 There’s no doubt that One Piece reaching chapter 1000 is a big deal. To celebrate, Shueisha is holding what appears to be the series’ first worldwide character popularity contest: titled ‘World Top 100,’ it will take place from 3 January to 28 February either online through the campaign’s official homepage or by sending in postcards, if you so desire. It’s pretty cool.

The theme of the World Top 100 campaign is ‘We are one,’ recognizing One Piece’s global popularity and how it has managed to touch countless fans’ hearts despite the cultural, linguistic, and geographical barriers that lie between it and its Japanese origins. Shueisha also hopes that by polling all fans of Eiichiro Oda’s series across the whole world, the true ‘ichiban’ (number one) will emerge, with the results being displayed by region.

Perhaps in order to widen the sample size, One Piece has also taken out a full-page advertisement in the New York Times to promote the World Top 100 campaign, which will be published in the Monday issue of the newspaper (January 4). It’s interesting that this comes but weeks after it named Keep Your Hands Off Eizouken! as one of its top 2020 TV shows: maybe you can teach an old dog new tricks.

In addition to the popularity poll, a special animated PV has also been created for the World Top 100 campaign, which features various One Piece characters announcing their ‘candidacy’ for the contest. This comes alongside a retrospective ‘1000 Logs Teaser Movie,’ which looks back on the adventures of the Straw Hats so far. It’s bound to make any longtime fan just a little bit emotional.

Eiichiro Oda’s letter to mark One Piece chapter 1000 also reflects this. Although unrelated to the World Top 100 campaign, it does talk about ‘ONE PIECE FANS of the world’ and calls on them to ‘watch over Luffy and his crew’ as the story draws closer to its conclusion. With the series being published at the same time as Japan for free on Manga Plus and VIZ Media’s Shonen Jump, that’s arguably easier than ever.

You can cast your vote for your favorite One Piece character once a day via the official World Top 100 homepage. I, for one, will be voting for Doflamingo!