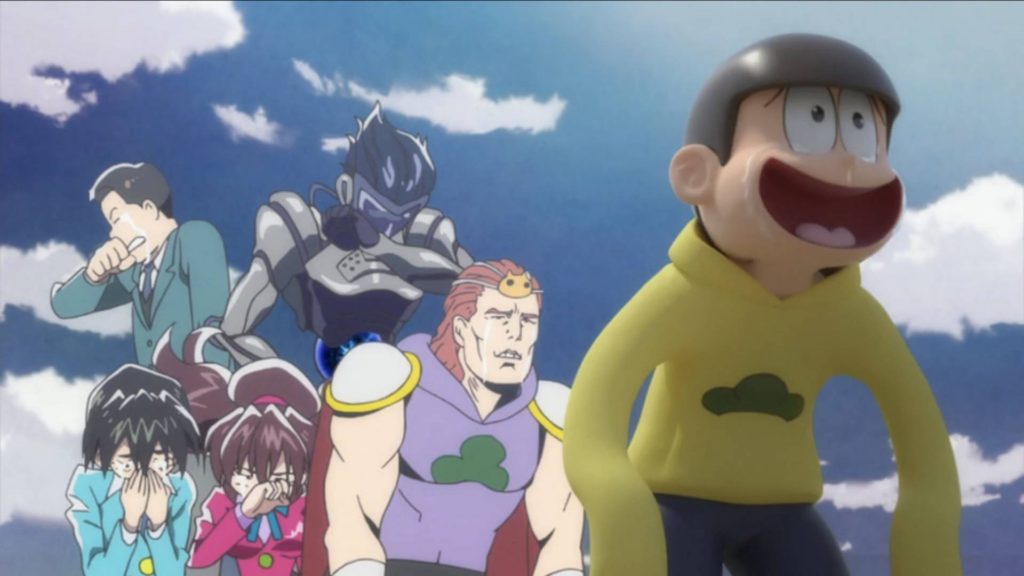 After an entire two years of waiting, “Osomatsu-san” is finally gracing our screens once more in the series’ second season; kicking off with a bang in the massive first episode which aired on Monday. Feeling like a long-lost friend to whom you’re finally re-acquainted, watching the first episode almost made it feel like the two-year absence never took place, leaving me laughing like a fool more times than I can count.

If you’re not familiar with the “Osomatsu” series, it was originally a 1962 manga series by the name of “Osomatsu-kun,” taking place before the current “Osomatsu-san,” when the main characters were still kids. In 1966 it received an animated adaptation, though it wasn’t until almost 50 years later that it would be given a reboot under the “Osomatsu-san” name.

Following the lives of the Matsuno sextuplets, “Osomatsu-san” is a hilarious commentary on various tropes in Japanese society, as well as an often honest critique of the anime industry.

For two whole years after it finished airing, not once did it feel like the “Osomatsu-san” craze died down in Japan. Proving a massive hit amongst a wide-variety of audiences, “Osomatsu-san” season two undeniably had a legacy to live up to — and I’m confident from the first episode it’s likely to deliver. Filled to the brim with what feels like a real evolution of the first season’s humor, season two undeniably steps up the way the series handles lampooning various aspects of anime culture.

Between the hilarious stab at deep-pocketed fans of the series, and even the way merchandise is handled, “Osomatsu-san” is painfully aware of its being, and I loved every moment of that. For both new and old fans alike, the second season is extremely approachable and is something I can’t recommend enough. What will be contained within the second episode, especially following the first, is a total mystery — but we can’t wait to check it out.

What’d you think of the first episode? Did it live up to your expectations? If you haven’t had the change yet, you can begin streaming the series via Crunchyroll, here.