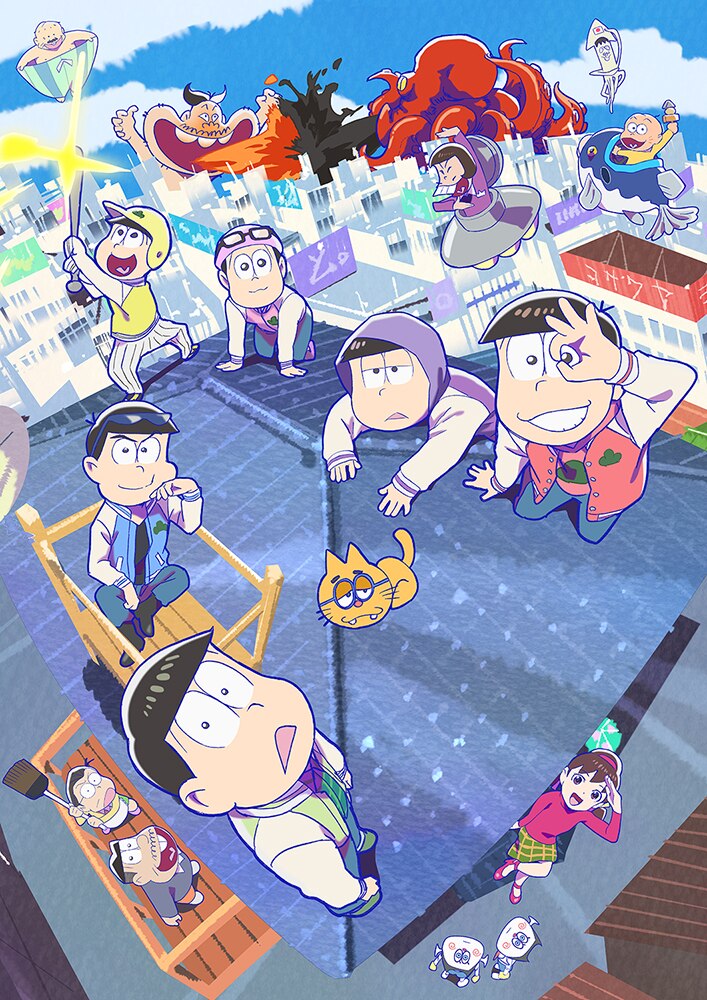 Those wild and crazy Matsuno brothers are back.

The third season of Osomatsu-san will start on Oct. 12.

The folks responsible for this weird, funny, and satirical comedy anime series announced the start date on Sept. 6. They also announced that idol group AOP will return to sing a new theme song for the show.

The new song hasn’t been revealed yet. But, it is apparently titled Nice to NEET you!   It’s a clever little pun on the sextuplets’ seemingly permanent status in life.

The show’s website also revealed a new promo visual for the third season over the weekend.

The new visual is mostly just more of the same random silliness that we’ve come to expect from this anime series. (Iyami has a UFO now, I guess?)

However, some eagle-eyed fans noticed a couple of new, unfamiliar characters down at the bottom of the visual.

The first season of Osomatsu-san came out in 2015. It was followed by a second season in 2017.

They also produced an OVA and a special episode. There was also a short spinoff. A full-length movie came out last year.

Technically speaking, the third season will begin at “25:30” on Oct. 12, which is something which actually happens with Japanese TV schedules.  The time translates as 1:30 a.m. the next morning.

The first and second seasons of Osomatsu-san (or Mr. Osomatsu) can be found at Crunchyroll, along with the Osomatsu-san movie.   Crunchyroll also has Osomatsu-kun, the 1988 version of the series.

The ’80s version is very Iyami-centered. But it’s worth watching while you wait for the third season of Osomatsu brotherly weirdness.

The Osomatsu franchise started in 1962 with a manga by Fujio Akatsuka, which spawned a black-and-white 1966 anime series.