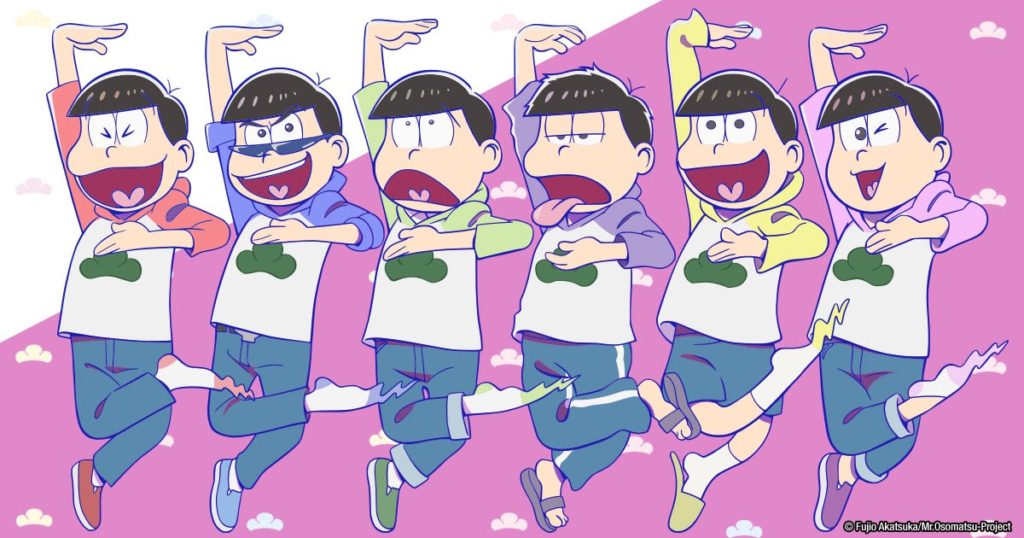 Take six identical brothers, add in a bunch of weird, wacky, strange and funny supporting characters, and what do you have?  The wild and crazy comedy anime Osomatsu-san, of course.

Osomatsu-san, unlike some reboots of old anime shows, is actually something of a continuation of the earlier Osomatsu shows.  It contains a lot of mythology gags and references to previous versions.  The characters are actually supposed to be the original characters from the original show, only “all grown up.”

This idea requires a little bit of cartoon logic (i.e. characters typically remain the same age unless the plot demands it). The original manga was created in 1962, and the brothers don’t look that old. Indeed, the Osomatsu brothers in 1988 don’t appear to be any older than they are in the 1966 anime. But there is a definite time skip between 1988 and 2015.

And yet, it seems to make sense. Or at least, it makes sense within the context of the Osomatsu universe. That is to say, it makes as much sense as anything else.

Anime comedies can be hard to translate into other languages.  Puns and wordplay often don’t work. If a person orders noodles and the waiter comes back with a mackerel, that’s not funny.  It can be funny if you know the minor, yet important, difference between “yakisoba” (stir-fry noodles) and “yakisaba” (grilled mackerel) in Japanese. But that can be hard to translate.

Also, there are cultural differences. During the 1970s, 1980s and 1990s, and sometimes even more recent shows, U.S.-based manga and anime translators tried to change Japanese cultural concepts to be more “American” in nature.

That led to infamous jarring instances, such as Pokemon’s rice ball/ “jelly donuts”; or the fact that Ace Attorney: Phoenix Wright’s “Los Angeles” looks nothing like the real thing.

More recent anime and manga series tend to assume that Americans understand sushi, Shinto, Buddhism, karaoke, obon, Oda Nobunaga, tonkatsu and other Japanese concepts. Or, at the very least,  that foreign anime and manga fans will have done enough homework to understand these things.

Osomatsu-san gets around the “comedy doesn’t translate” problem by being wacky, weird and funny enough that we don’t care.  It doesn’t matter if the characters love oden, a Japanese food not frequently found in the United States, even in Japantown or Little Tokyo. The gags are slapstick, the plot often doesn’t really matter all that much and the laughs come quickly.

It does help to know a little bit about the history of these characters.

For centuries, people have created stories about rambunctious, trouble-making little kids. Think of Mark Twain’s The Adventures of Tom Sawyer, or Dennis the Menace, or Our Gang/ The Little Rascals. Even young Jesus is said to have strayed from his family, and questioned his elders at the Jerusalem Temple at the age of 12.

Kids are a great source of material for storytellers. They have school, teachers and homework, friends and enemies, playtime and sports, and families. They celebrate major holidays, get sick and do chores. Naturally, anime and manga would also have stories revolving around children.

In 1962, Fujio Akatsuka created a comedy manga called Osomatsu-kun. The manga ran for several years and was turned into a black-and-white anime in 1966.

Who are these six guys? 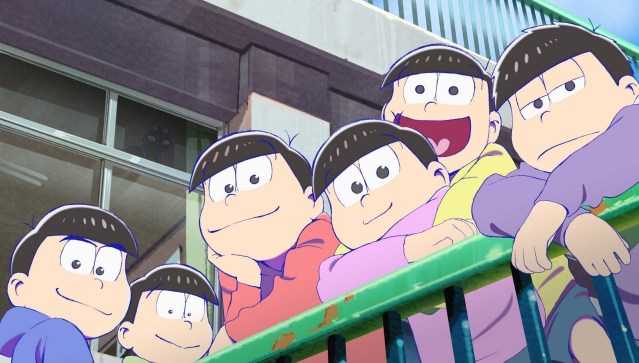 Let’s start with the 1966 anime, Osomatsu-kun. This show featured six identical brothers, the Matsuno sextuplets.  At this point in anime history, the six 10-year-old brothers look alike and dress alike. A lot of the time, they even act alike, so it’s pointless to try to describe them individually yet (which is also something of a running gag for the franchise).

There’s a vague sense that one of these six must be the eldest and the leader (Osomatsu), but it can be hard to tell which one is Osomatsu.

The six are: Osomatsu, Karamatsu, Choromatsu, Ichimatsu, Jyushimatsu and Todomatsu. Most of the characters from this series would show up in the 1988 and 2015 versions: Totoko, Iyami, Chibita, Dekapan, Dayon, Hatabo and the Matsuno parents.

The 1966 series is not on Crunchyroll, but with a quick Google search, you can find a few grainy episodes on YouTube (the YouTube videos appear to have been put up by fans, and are not official). If you’re uncomfortable with watching anime on YouTube, you might want to skip ahead to 1988.

Fortunately, the 1988 version of Osomatsu-kun is available on Crunchyroll. It was added to the online streaming service after the popular success of the 2015 Osomatsu-san series.

Interestingly, the 1988 version makes Iyami much more of a main character than even the six brothers.  Here, Iyami’s con artist tendencies are in full bloom. He finds many, many ways to trick the Matsuno brothers and the other characters — although the boys do find ways to get back at him.

Despite the title, the Matsuno brothers would seem to be supporting characters in their own anime.

The six are troublemakers, and there are gags revolving around the problems of having six of these kids around. Totoko is the token girl, although she grows into a more interesting character. Chibita is the brothers’ short friend, frenemy and rival. Chibita sometimes teams up with Iyami to create trouble for the brothers.

In many of his appearances in 1966, 1988 and 2015, Dekapon is a parody of a typical mad scientist, inventing all sorts of impossible and ridiculous things. Of course, these inventions are an endless source of comedy, such as various personality-switching or altering devices (many of the personalities are rotten).

Dekapon’s role in Osomatsu is somewhat similar to the title character of Doraemon, and the young brothers do resemble Nobita Nobi. However, the Osomatsu-kun manga pre-dates Doraemon by a couple of years.

From Kun to San

In 2015, the Osomatsu brothers finally switch from the boyish, informal “kun” title to the more adult “san” form of address. Meet Osomatsu-san (or “Mr. Osomatsu”).

Most of Osomatsu-san is available on Crunchyroll. Sadly, Episode 1 was taken down. According to multiple reports, the first episode was removed because of copyright issues.  The first episode was jam-packed with recognizable anime parodies, which made fun of various genres and specific anime series as the brothers tried to figure out what sort of anime they should be.

The 2015 version is a lot more wacky and wild than the 1988 version. The characters are also frequently self-aware of the Fourth Wall. At least, they seem aware that Osomatsu-san is an anime and will act accordingly (as they do in the aforementioned first episode).

The boys have grown up, although they haven’t matured much. They typically have no jobs, and live at home. They finally have divergent personalities, although it can still sometimes be hard to tell them apart.

In the 2015 version, Iyami is still a con artist. He is sometimes paired with Chibita when there is a scheme or scam, although Chibita also now runs the local oden stand.

Totoko evolves into a more interesting character in the 2015 series.  She wants to be an idol, and she has had some (limited) success at it.  Her personality ranges from sweet and cute to easily angered and selfish — sometimes swinging back and forth in the same episode. She is still a “love interest” for the six brothers.

Some of her personality is a holdover from the 1988 or 1966 versions of the series.

Other characters are pretty much the same as previous versions.

The second season of Osomatsu-san began with the 26th episode in 2017, and ended in 2018. The 50th episode features them dying and going to the Underworld, although they manage to make it back.

There has been no official announcement of a season 3.

In 2019, a movie was made, based on the 2015 anime.  The movie gives us a look at the backstory of the Matsuno brothers and their friends.

What happened to the brothers between high school and now? How have they changed, and what caused them to change?

There is quite a bit of time travel involved, as the brothers find themselves stuck in the past, or the memories of the past. It’s complicated, but there’s a lot of introspection as they remember past events, attempt to fix things or put things right.

The whole thing is very dreamlike and metaphysical, and it can be hard to tell what’s real and what’s not. However, things do seem to change for the better for at least one character at the end; so the whole adventure isn’t just an exercise in navel-gazing.

Despite the whimsical and nostalgic nature of the movie, it is still quite funny.  And it provides viewers with a peek into the past.

There is quite a bit of official art out there for Osomatsu-san.  Amazon has the Osomatsu-san Official Fan Book.

An Osomatsu-san manga was also published by Shueisha, starting in 2016. It is available (untranslated in Japanese) on Amazon.  The latest volume is #8, and it came out in February of 2019.