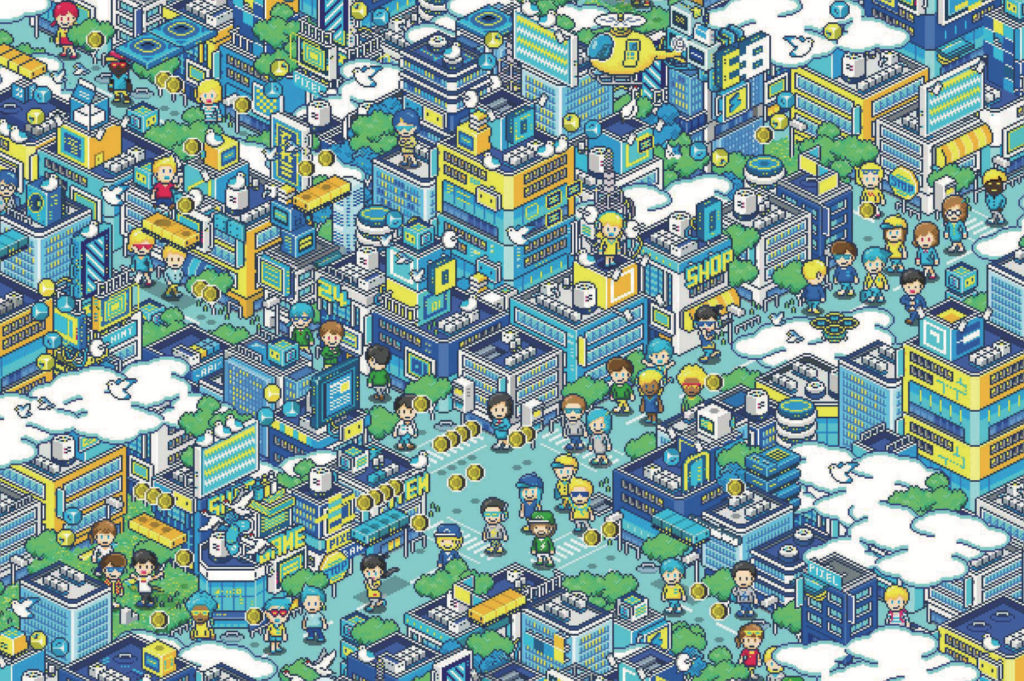 After almost a year of build-up and questions ever since it was initially announced, Otaku Coin has finally been made available to the general public. In their own words, Otaku Coin is “a community currency to bring together people worldwide who love Japan’s anime, manga, and video game culture aimed at furthering its development.” Claiming to be a cryptocurrency that will revolutionize anime consumption and the funding and structure of the anime industry itself, every piece of news and information left more questions than answers and increased skepticism regarding what they were planning to achieve and how they were going about achieving it.

I am personally someone who’s been doubtful about Otaku Coin ever since it was unveiled. When the initial concept paper was introduced on May 9, even disregarding my general uncertainty about cryptocurrency more broadly, I was unsure about how vague and ambitious many of the claims were and how extravagant some of their proposals were. Their goal to essentially restructure an entire industry through a currency was not only audacious but left conspicuously vague. Many of the uses for Otaku Coin were either unexplained, such as their plans to help use the currency to allow fans to pay individual animators directly which remain to this day unexplained and flawed, or were simply extensions of services companies on the currency’s committee were already in charge and which success would do little to reform the industry more broadly.

To give the benefit of the doubt, though, you could reasonably say that the vague and unclear goals and other concerns could be brushed aside as simply being the cause of a project in development. ‘The launch will fix these issues’, you could assume. If I were to be brutally honest, however, after downloading the application and updating myself on their progress in recent months, there is little here to make me feel like this could ever become something viable that could hope to achieve many of their goals.

Booting the app for the very first time requires you to verify your identity in order to create an account with which your Otaku Coin will be stored. Registering now while the user base is small will even see you receive 3000 Otaku Coin (XOC), although for now, that seems to matter little. Currently, the app can only be used to send ‘messages of positivity’ to a variety of anime studios which are enrolled into the scheme, including Bones, Sunrise and Trigger, while also reading a selection of interviews conducted with those who work there. Supporting a studio will see you 300 further XOC added to your account.

…That’s it. Currently the only thing you can do with XOC (separately from the app, frustratingly) is to convert them into TOM Points for use on the Tokyo Otaku Mode Store, making the entire cryptocurrency in its current state a glorified coupon code. It should be noted as well that Tokyo Otaku mode are partners on the committee for the currency and while there is a $3 (or 300XOC) conversion limit per month, if you pay money to get into the TOM Premium Member scheme, your limit is lifted to $30 (3000XOC). TOM Premium costs $15 every 90 days. 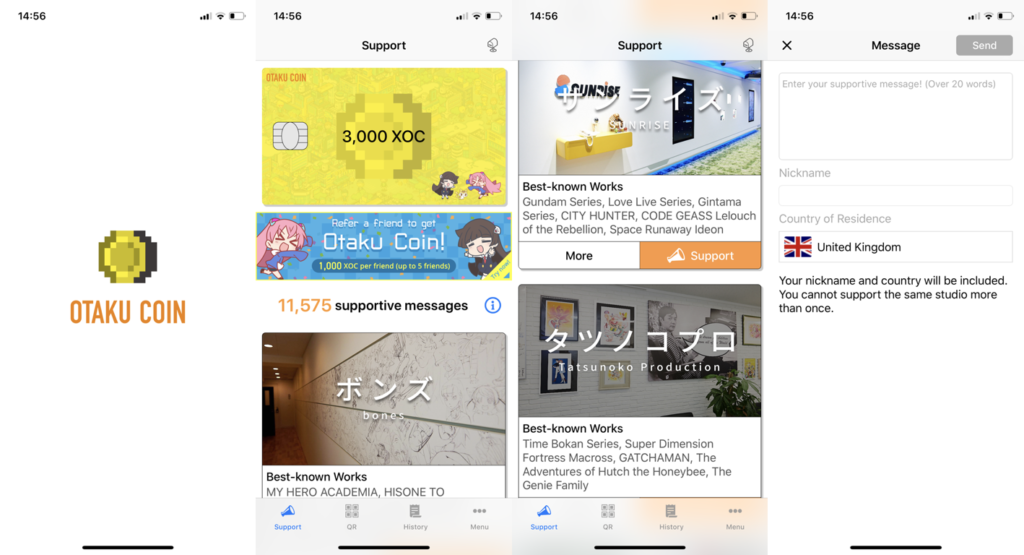 Based on an updated concept paper, future plans, many of which have been discussed in the past, will not launch until later in 2019. These include ties with otaku merchandise stores and a voting platform named ‘SPIRIT VOICE’ that could be used to fund new anime productions. These possible future uses lack any details on how they would function, leaving the question in the air of why a person should care about this cryptocurrency when it has no use now and future use is unclear.

As you can perhaps tell from the tone of this article up until this point, the launch of Otaku Coin has left me very unimpressed. At the same time, it would also be fair to argue that this launch has gone by relatively unnoticed. In fact, I could imagine a good proportion of the people reading this article have never heard of Otaku Coin before, with this piece maybe even being their first exposure to it. You could, perhaps, ignore this currency as a project which had potential and failed to capitalize on it and move on. Is this even worth discussing?

Otaku Coin in its current state is not going to succeed. This application is too barebones, their future plans unexplained, the level of buzz too small for that to happen. Regardless, the nature of who is involved in its creation make it an important topic of discussion, and worrying parts of their organization leave the committee in charge of the currency’s creation with questions that need to be answered. Even if it were to fail or it fell into obscurity, these issues alone make it worth talking about. Many major companies and entities are involved in Otaku Coin’s creation. You have Tokyo Otaku Mode: one of the largest otaku merchandise stores in the world which commands a powerful social media presence with over 20 million likes on Facebook, the Tokyo Institute of Art and Design, and Rakuten Collection (a subsidiary of Rakuten) each involved in the currency’s creation. Advisors include virtual YouTuber Kizuna Ai and the controversial founder of Oculus, Palmer Luckey. Each of these companies and individuals, with the help of others, are involved in ensuring the currency’s success, and are putting their money where their mouth is. 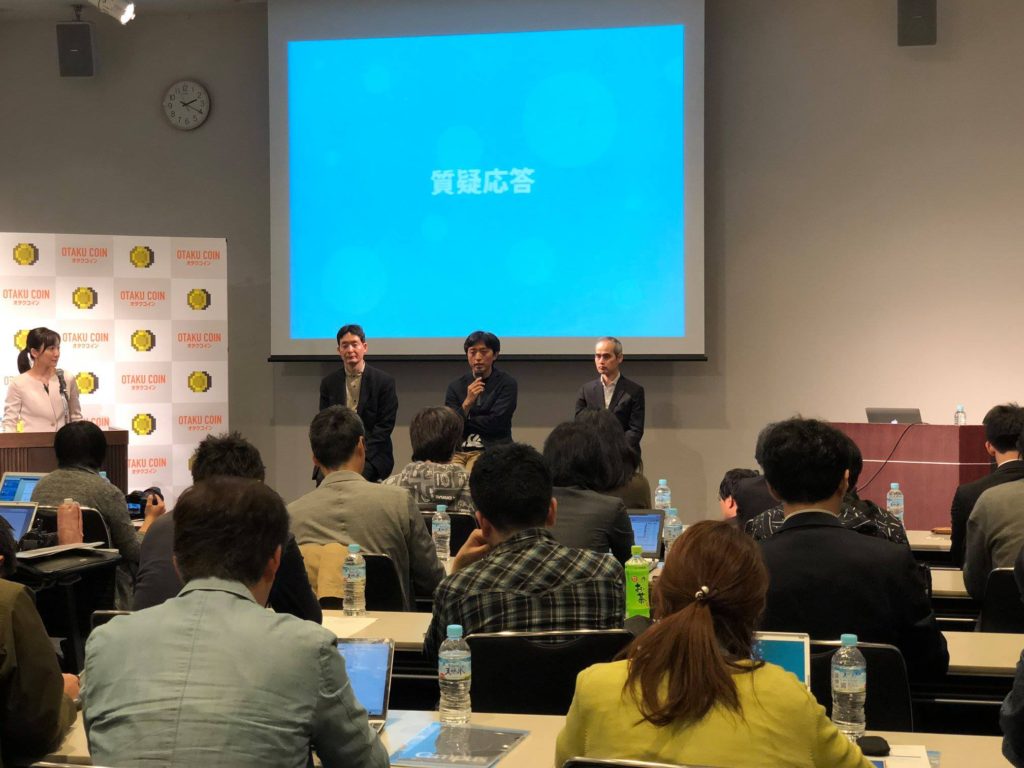 In a press conference held a few months ago, details on just how much money was being created in the currency’s creation were given, and the amount of money involved in this project isn’t short change. Overall, 100 billion XOC were going to be created, each valued at 1yen = 1XOC. At current currency exchange rates, the 100 billion XOC would be worth $912 million. 39% of this currency, or $355 million, would return to the companies and individuals mentioned above for operating expenses, an amount that seems excessive for the work that would be required to establish a cryptocurrency, especially when compared to other examples. One similar case would be the founder of Ethereum, who has stated they own less than 0.5% of the total currency distribution.

With such large amounts of money being involved, questions still need to be asked, even though people have done this prior to the currency’s launch. The above video from YouTuber & OTAQUEST contributor Callum May, better known as The Canipa Effect, raised a variety of questions about the proposals being put forward at that the original time of announcement for Otaku Coin. One thing that was promised in response to such concerns was a certain distance would be placed between the most prominent founder of the currency, Tokyo Otaku Mode, the committee, and Otaku Coin itself, to remove concerns about conflicts of interest. Yet, in the months following, CEO of Tokyo Otaku Mode Nao Kodaka continued to conduct interviews and appear at press events for the currency, acting as the public face for the currency despite his place at Tokyo Otaku Mode and lack of place on the Otaku Coin committee.

Otaku Coin in its current state has, in my opinion, been launched too early, lacking a clear purpose and basic features. If I were to simply discuss the news that Otaku Coin officially launched in the past week and give my impressions on this launch, I’d have to say that it’s been poorly handled and won’t succeed in its current state. However, I feel it would be irresponsible of me to fail to discuss some of the wider issues that surround the currency that will continue to follow it in the months ahead, such as vague promises and unclear ambitions. When such ambitious goals are in place with such major players behind it, there is a need for scrutiny beyond a surface level on the shortcomings of the application and currency in its current state. As it is, the necessary questions are being unanswered, meaning that even if the barebones nature of its launch are improved upon over time, there is a level of trust that is very much lacking in its current incarnation.