To start things off, let me clearly state–there’s nothing inherently wrong with Akihabara. If you’re planning a trip to Japan and you’re obsessed with all things anime, manga, and game-related, Akihabara will both drain your wallet and send your spirit soaring in equal measure. But Akihabara isn’t the only place to visit, and if you’re the type who’d like to leap off the beaten path and venture outside the neon capital, there are plenty of locations all over Japan to speak to your inner otaku. From museums and amusement parks to yearly anime festivals, Japan offers more than you can imagine. You just need to know where to look. 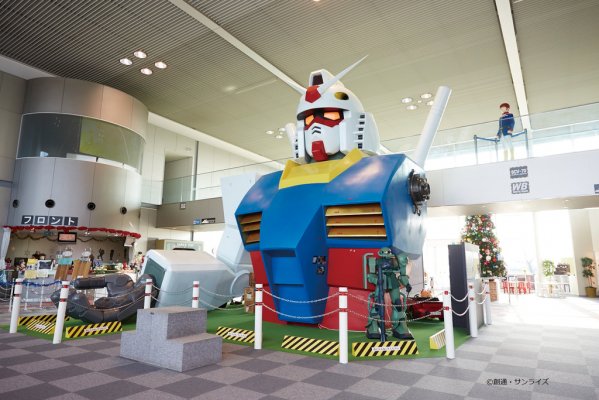 Literally called ‘Bandai Museum and Toy Town,’ in 2007 the location moved from Chiba to its new home in rural Tochigi Prefecture, about 100km from Tokyo. While the main hall’s life-size Gundam bust is neat, it can’t beat the massive amount of toys on display, some from around the world and many (about 20,000) from Japan. These toys range from the Edo Period to today, and seeing so many in one spot is something you aren’t likely to forget. Seriously, this is the only place you’ll see British antique dolls alongside Astro Boy and Kamen Rider. And hey, when you leave? Tochigi is known for its gyoza. Go eat some for me. 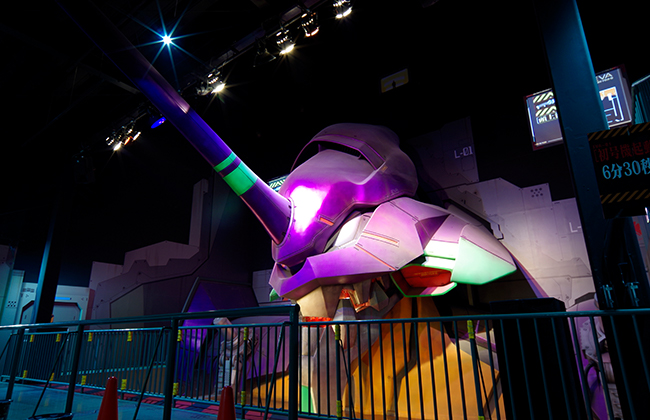 Sure, you might be thinking of taking a quick jaunt to Tokyo Disneyland while staying in Japan’s capital, but there’s another theme park I’d suggest. If you’re a fan of anime and want to ride some incredibly terrifying roller-coasters (0 to 112mph in 1.56 seconds!) that Disney just can’t provide, Fuji-Q Highland is less than two hours from central Tokyo–and the backdrop of those crazy coasters is Mount Fuji. Naruto fans can enjoy the Fuji Hidden Leaf Village, an entire area dedicated to the legendary ninja series–or, if that’s not your thing, check out EVANGELION: WORLD, an interactive exhibition that makes for a perfect photo opportunity. (And, as expected, there are some limited edition items you can pick up at the gift shop.) 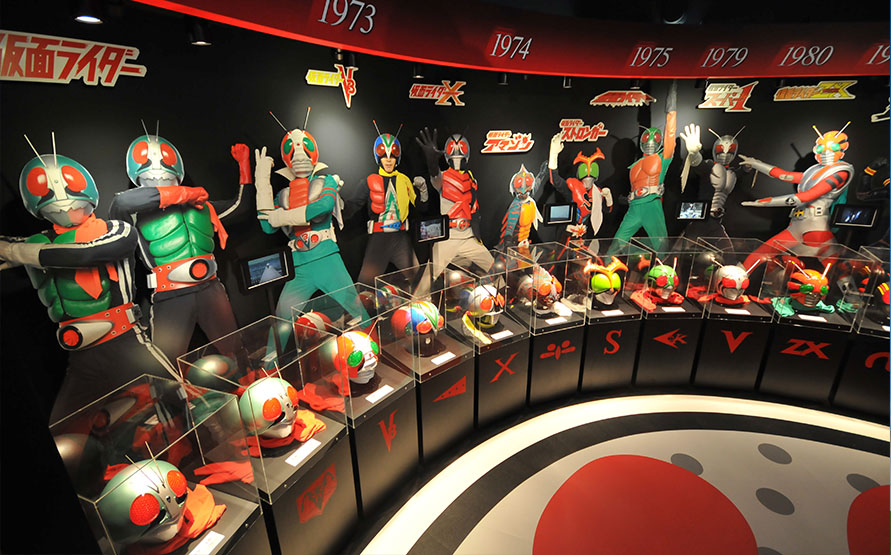 Fans of Cyborg 009 or Kamen Rider can’t come to Japan and not visit this spaceship-like museum located at the mouth of the Kitakami River in Miyagi Prefecture. While much of the location was destroyed during the Great Earthquake of 2011, all three-stories have been painstakingly rebuilt. On the top floor, you can choose from other 6,000 manga to read while sipping a coffee or try your hand at drawing some manga at the multimedia studio. This makes the list not only for the sheer amount of goods to see but for being the most hands-on anime museum I’ve visited. 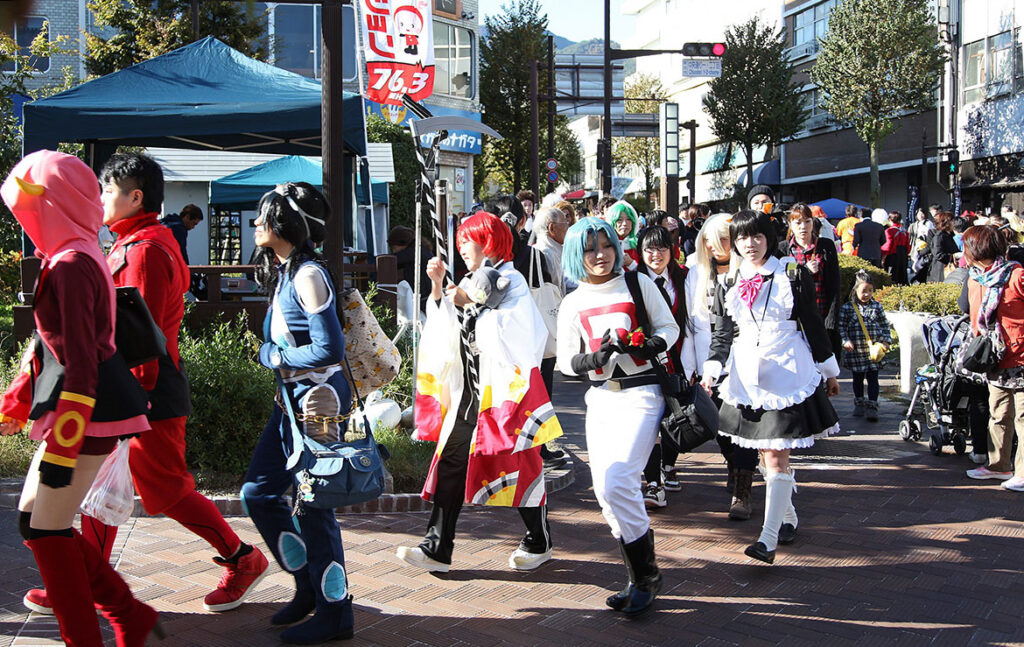 When talking about anime events in Japan, you may think of Comiket or AnimeJapan–and for good reason. But anime events aren’t limited to Tokyo! If you’re looking for a more unique event, the Iida Hill Town Festival might be calling your name. Taking place each year on November 3, the small town in the south of Nagano Prefecture welcomes a hoard of cosplayers and a squad of itasha to parade through the town–and while the sight of anime fans strolling through a quaint Japanese town is incredible, you also have the chance to sample plenty of local delicacies and enjoy a side of Japan that just can’t get in the hustle and bustle of Tokyo. If any of this sounds familiar, Crunchyroll actually has a short series highlighting everything this town has to offer. 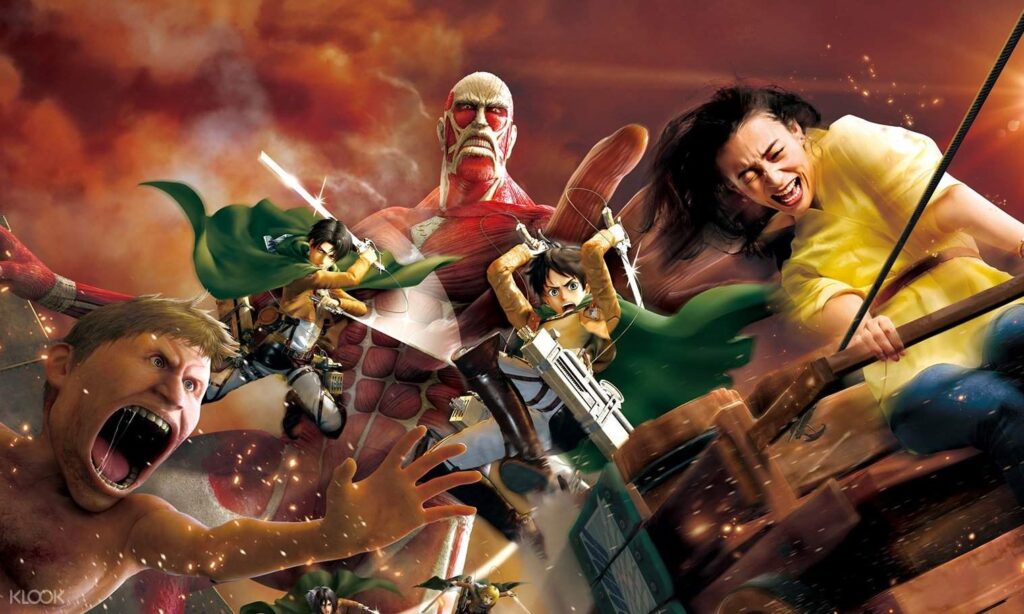 For the past five years, Universal Studios Japan in Osaka has teamed up with Cool Japan to bring some of the most popular anime and manga series to life through a series of impressive attractions and exhibitions. (Remember the Godzilla/Eva mashup?) While this year was definitely impacted by the global pandemic, 2020 featured an Attack on Titan ride, a Lupin the Third live show, and even a Monster Hunter World ICEBORNE XR WALK. The latter had guests completely clothed in VR equipment–not just goggles, but hand trackers and a backpack with plenty of fancy equipment. (You even had a replica weapon to swing around!) We’re not sure what the future will bring for Universal, but it’s unlikely that this Cool Japan partnership will be ending anytime soon, given how popular it’s been so far.

If you’re just looking to buy some merch, sure–head to Akihabara. You’re sure to find what you’re looking for in terms of goods and games. But if you’re looking to come back with some neat stories, some neat photos, and some truly unique memories, you might want to think about venturing to one of the places above. Japan has so much to offer outside of the bright lights of Tokyo, even in terms of anime and manga. Venture out into the unknown, and you might see where your favorite creators found their inspiration.

Believe me–you’ll be inspired too. Japan just does that to people.