Otaku no Video: The 90’s Toast to (and Roast of) Otakudom 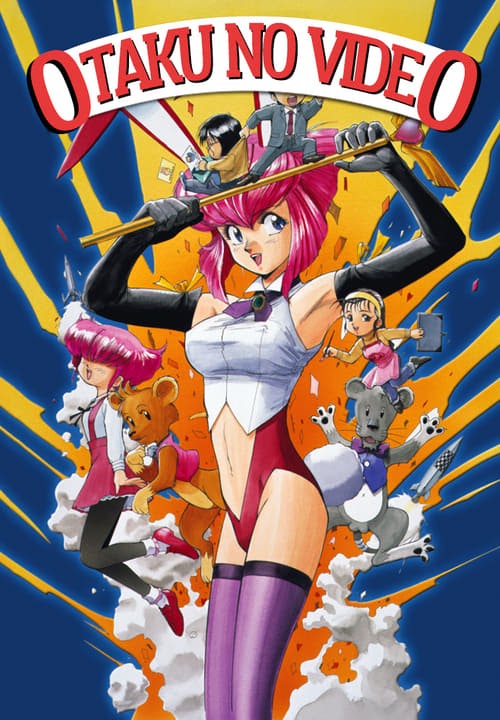 It’s become cool to like anime these days. And it’s kind of a bizarre turn of events when you really consider how uncool it was ten or twenty years ago.

Back in the day, before telecasts and simuldubs became a hit on the Internet, before anime conventions blew up around the world, before it was cool to walk around the park with a My Hero Academia t-shirt on, Japanese animation was just but an underground art form. And not even considered a ‘cool’ one either, but rather one that was to be taken as seriously as Italian progressive jazz-core music.

So naturally, the anime fandom barely had any representation worldwide. And it didn’t help that the social stigmatization of otaku in Japan was at a peak either. The late 80s brought along infamous otaku killer Tsutomu Miyazaki, and in his wake, a wave of distrust and disgust towards anime fans. To say that it was an awkward time to be an otaku is to understate things.

Yet somewhere in the midst of all this turmoil still existed a small sliver of otaku pride within the community. And with that came Otaku no Video, one of the most intriguing pieces of otakuism to emerge from the bygone time period that was the pre-Evangelion 1990s. Maybe you’ve heard of it, talked about once or twice within the deepest annals of /a/ or anime YouTube.

For the most part, it’s remained an esoteric gem of the OVA era, and conversation regarding it has been mostly relegated amongst the most hardcore of anime fans. To see it today is to witness an important part of anime history, specifically the history of its creators: the legendary anime studio Gainax.

The Origins of Gainax

The founding of Gainax is a legendary tale of otaku trying to break into the industry through any means possible. It’s a classic underdog story, filled with ambition and passion.

As the story goes, Gainax started as a group of college friends and die-hard anime fans so dedicated to the art that they wanted to take a crack at it themselves. So they collaborated on a short, shoestring-budgeted anime film embedded with references to popular sci-fi anime and movies.

That short film became the opening animation that would ring in the Osaka’s Nihon SF Convention, also known as Daicon III. It would receive glowing audience reception and a decent amount of exposure through word of mouth and even a few press releases.

This would inspire Gainax to make a higher-budgeted sequel in a ‘little anime sweatshop,’ which aired at Daicon IV two years later and further solidifying their status as a prominent and up-and-coming anime studio. A few years later, they would make Royal Space Force: The Wings of Honnêamise, and (as the cliched statement goes) the rest was history.

Watching Daicon III and IV, with all of their tributes and nods to old mecha, shojo, and tokusatsu, you could tell right away that Gainax were enthusiastic otaku who wore their pride on their sleeves. They were the otaku’s otaku: people who understood the magic and wonder of anime and endlessly worked on their craft to get others to feel the same way.

Gainax would also be famous for being the first anime studio to come into existence without previously being part of an already-existing anime studio. With studios like Deen coming from Sunrise and Madhouse coming from Mushi Productions, it seemed impractical to create a successful anime studio from the ground-up. In a very loose way, this kind of makes Gainax the anime equivalent of an independent Silicon Valley start-up company (albeit one without the glitz and glamor).

You’d think that this success would go smoothly with Gainax. But yet, they were still saddled with the burden of knowing how otaku were perceived by society at large. That anime was just seen as just a hobby for weird cultists who enjoyed ‘childish’ things like giant robots and cute girls riding flying swords through space. Otaku weren’t just nerds, they were deviants and miscreants. That very paradox of pride and shame existing within otaku culture is precisely what would inspire Otaku no Video. 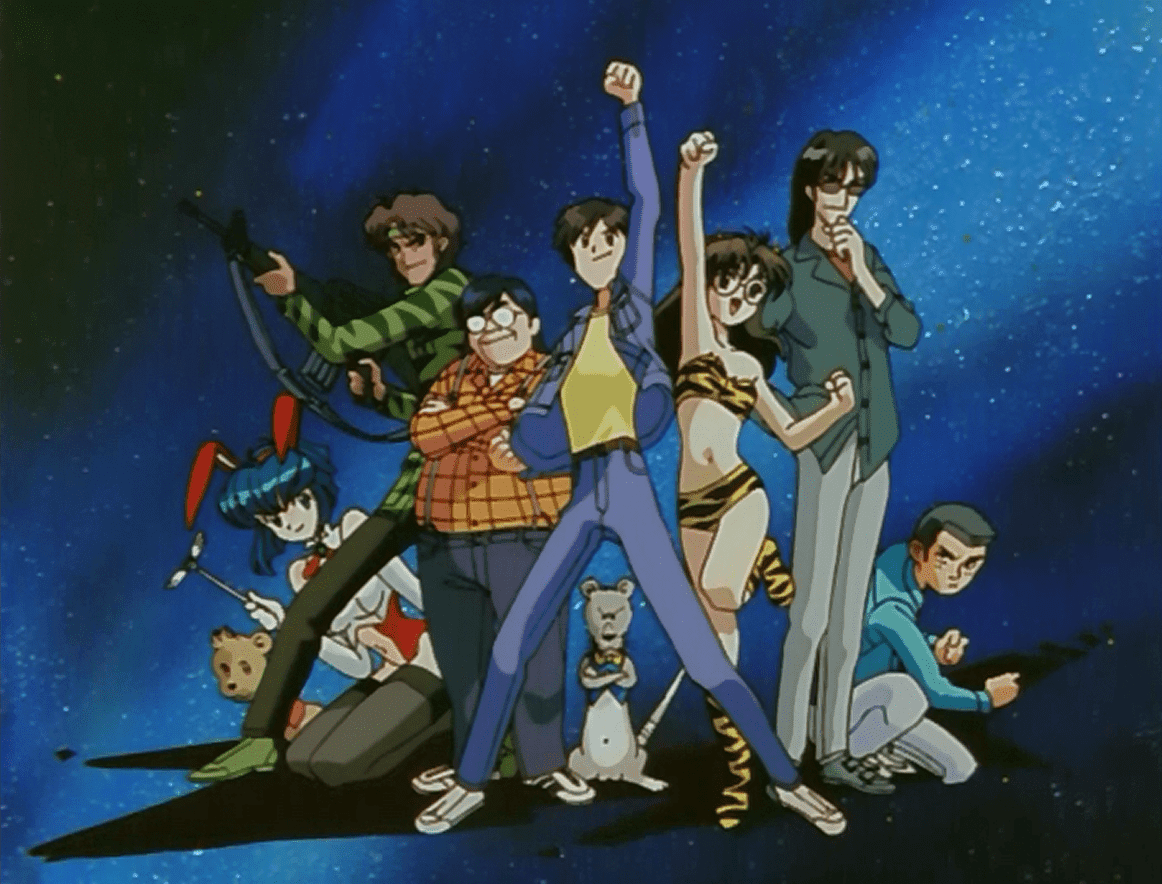 Otaku no Video was released in 1991 as a two-episode OVA series. A comedic re-telling of the founding of Gainax and their place within anime culture, it is a 90-minute-long visual journey rich with self-deprecation, irony, and meta. In its own bizarre, dual-natured way, it serves to both glorify and mock the absurdities of early 90s otaku culture.

The story of Otaku no Video revolves around Ken Kubo, who is just your normal average school student. He’s an avid tennis player with an active social life. He has a girlfriend and (gasp) even lives with her. These are things totally unheard of.

All of that changes when he becomes part of a group of nerds who obsess over Mobile Suit Gundam and Urusei Yatsura. And that’s when he turns to the otaku side, he starts binging anime, he starts going outside less and he even has an unfortunate break-up with his girlfriend over his newfound obsession.

And yet, he’s not satisfied with being just an ordinary otaku either, not even by a longshot. Together with his friend Tanaka, Kubo plays a hand in creating the next big magical girl show, Misty May, and to be the most fully realized otaku being: the OtaKing.

But that’s just half of the story. Otaku no Video also boasts the bizarre ‘Portrait of an Otaku,’ a series of live-action interviews with anonymous otaku interspersed throughout the movie. This provides an interesting, cynical and sardonic contrast to the animated main storyline, as the people interviewed are shown to be stereotypical over-obsessive, socially inept, and perverted otaku.

The crazy part is that we don’t see their faces, as they are censored and blurred. However, the otaku interviewed are rumored to be the actual founders of Gainax, including future Evangelion creator Hideaki Anno.

If that is indeed the case, then what does it say about them? Were they in on the joke, or was this truly how they saw themselves? Hideaki Anno would denounce otaku years later, saying that they have made Japan ‘a nation of children.‘ It’s very possible that Anno and company had long bottled feelings of frustration and humiliation, and this was their attempt at catharsis.

How Does It Hold Up Today? 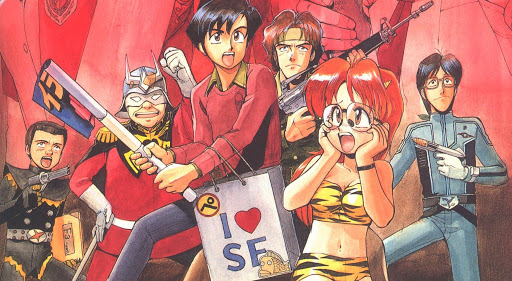 Otaku no Video has since been buried by the sands of times into relative obscurity, and, in this writer’s humble opinion, stands as a dated relic of early 90s anime. I have seen it no less than three times, and each time, it felt like I was watching an important part of history and not an engrossing piece of entertainment, although it still has its moments.

It doesn’t have the longevity of other Gainax productions and mostly exists as an in-joke shared between diehard Gainax enthusiasts. Not to mention its self-deprecating, low-budgeted live-action scenes might be a bit jarring and grotesque for modern anime fans.

And yet, its place in anime history is unmistakable. Love it or hate it, Otaku no Video remains perhaps the most interesting portrayal of early 90s otaku culture. And it would remain the undisputed heavyweight champion of self-referential otaku comedy until Lucky Star became a national phenomenon with its own style of referential humor. Even then, I’m certain that Lucky Star owes a gigantic debt to Otaku no Video; it’s practically the OVA’s spiritual successor.

Anybody interested in wondering what anime was like before Pokemon, Evangelion, and Cool Japan took the world by storm should make it a point to watch Otaku no Video at least once. But that leads us to one final question.

Where Can I Watch It?

Otaku no Video has been infamously played at the start of the American East Coast-based anime convention Otakon, whose very name is derived from the OVA. It seems befitting for the convention, since Gainax famously kickstarted Daicon III and IV with their own shorts. However, that might be the only place that still actively (and publicly) shows it.

Due to the niche nature of Otaku no Video, there is no legal way of streaming it. That does not mean that it is completely unavailable: you can buy a cheap DVD copy of it for $8, or you can buy the special edition Blu-Ray on Japanese Amazon for 13,490 yen ($138.31).

What Makes ‘A Cruel Angel’s Thesis’ From Neon Genesis Evangelion So Memorable?

Evangelion Store Set to Open in Osaka at Namba Marui