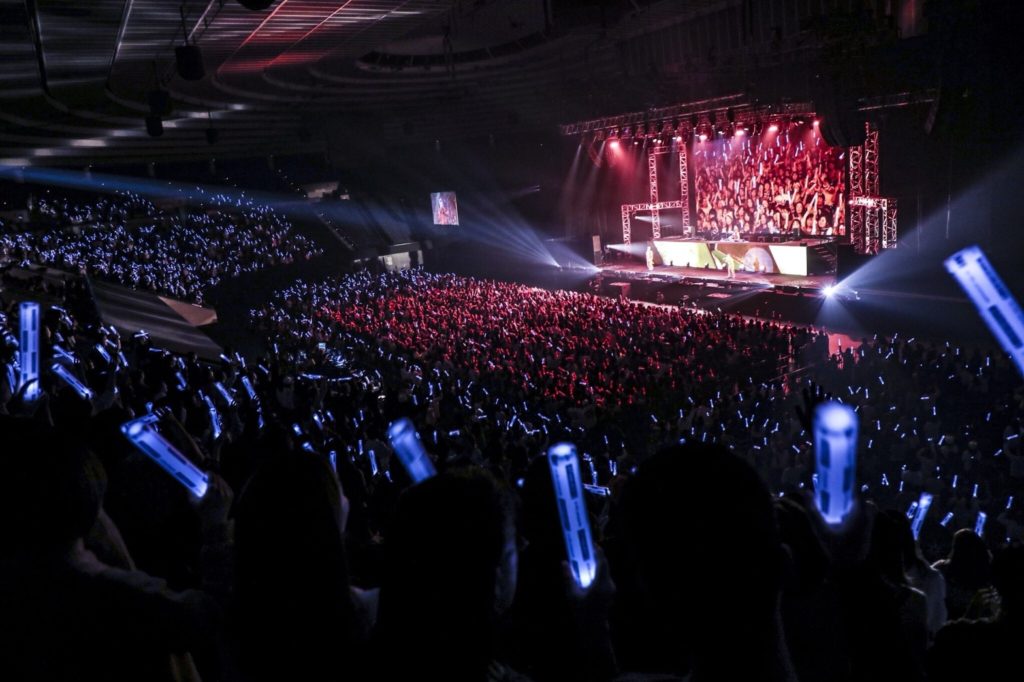 Introducing and informing the general public to various aspects of Japan’s vivid pop culture landscape has, from day one, been the goal of OTAQUEST. Whether it’s anime, music, games, or even fashion, we aim to deliver some of the most relevant names and titles that you may or may not already be familiar with. Yesterday, on December 19, we took this to the next level with our second m-flo presents: OTAQUEST LIVE event, this time being held at the world-famous Osaka-Jo Hall in Osaka, Japan. Bringing together an eclectic lineup of talent, we aimed to create a festival that bridged all corners of both overground and underground culture in a single event, and we couldn’t be happier with the end result.

Before the event could even get started, we had eager fans swarming towards Osaka-Jo Hall for the early drop of our official merchandise where we saw tie-ins with messaging giant LINE and official merchandise collaborations with Ghost in the Shell: Arise. Not just that, but we also brought down a pop-up for the PKCZ Gallery Store which was selling the brand’s most recent collaboration with Dragon Ball Z. 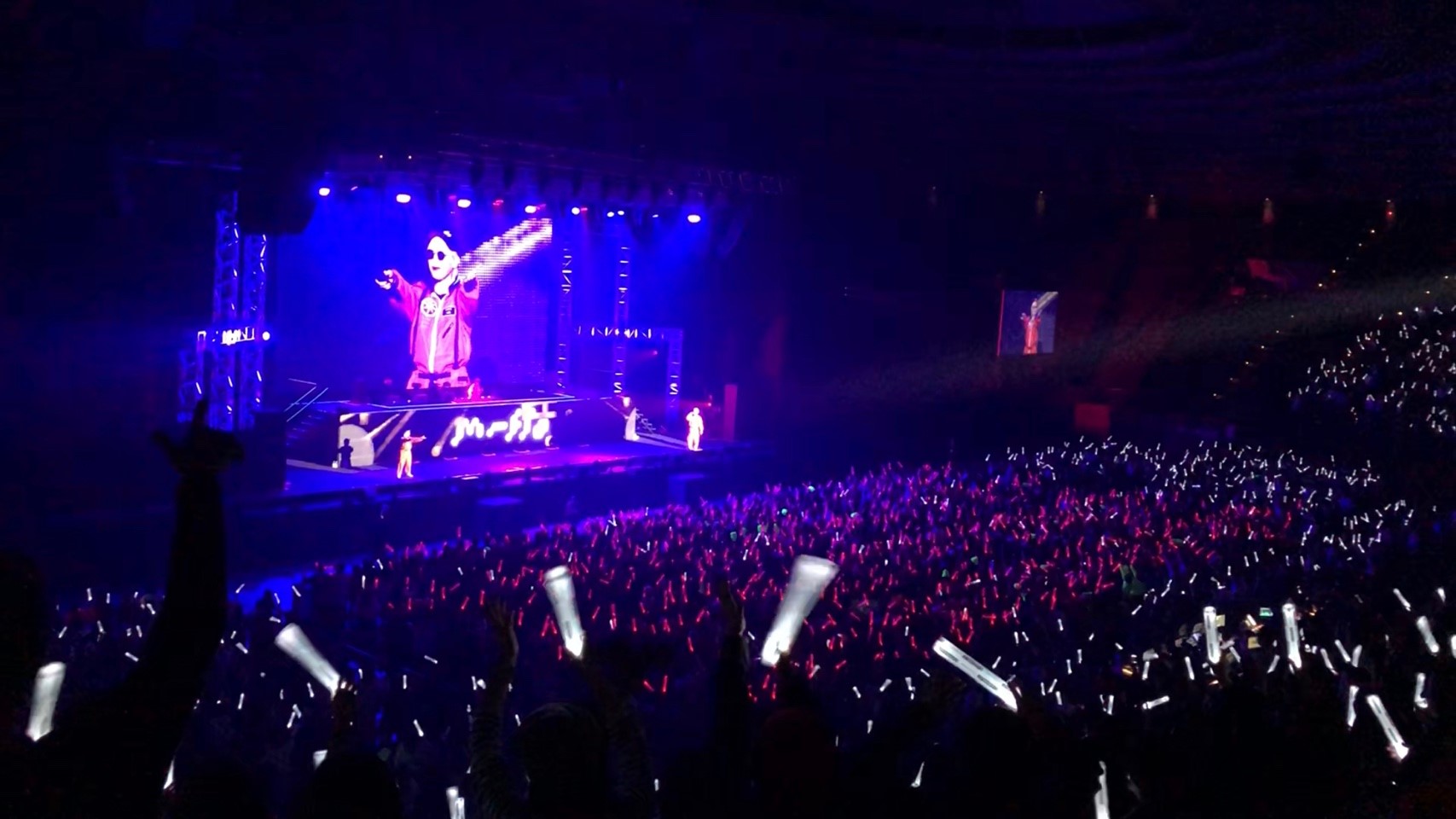 Opening the night, we had NIGO®-produced female pop-rock unit BILLIE IDLE® take over the stage with an incredible performance that perfectly showcased their dance, singing, and even instrumental abilities, with a killer, live harmonica solo broken out midway through their song “Everydays”. With their latest album “NOT IDOL” having just released in November, we definitely saw a number of songs from that performed. It was the sort of performance that only BILLIE IDLE® could pull off, and it definitely wasn’t something to be missed.

Following on from BILLIE IDLE® we had one of the most interesting performances of the night, with Virtual YouTubers KMNZ taking over the big screens to perform their debut original single “Virtual Reality (prod. Snail’s House)”, as well as a number of classic hip-hop covers that had the crowd swaying to the groove. It was by far one of, if not the biggest, live performances by a Virtual YouTuber to date, with over 5,000 people in attendance. Coming in at the mid-point of their set, both Taku Takahashi and Mandy Sekiguchi took to the stage for a brief intermission with both KMNZ members Liz and Lita to discuss a number of topics related to the Virtual YouTuber medium. For many in attendance, it was very likely their first encounter with Virtual YouTubers, so we were very glad to see their reactions.

Our third act was a very personal one to a number of our staff, and it was as incredible as ever seeing CAPSULE take over the stage. Earlier this year we booked CAPSULE’s producer Yasutaka Nakata for our event at Microsoft Theater in Los Angeles, so having both him and Koshijima Toshiko together on stage was definitely exciting. It was a whirlwind of a performance that took us through CAPSULE’s extensive catalog of music, with each song leaving the crowd vibing throughout. I know all of our staff in attendance definitely couldn’t have been happier with the energy they brought to the arena.

The event really kicked into overdrive when PKCZ® stormed the stage, opening with both DJ MAKIDAI and DJ DARUMA playing out festival edits of some of LDH’s biggest artists, sending the crowd into a frenzy, before VERBAL joined them to perform a handful of originals. Their energy was definitely felt throughout the entire audience, with their party-focused selection proving a hit with just about everyone in attendance. While this was the first time we saw VERBAL on stage, it certainly wouldn’t be his last, with two more appearances from the multi-talented creative taking place during the event.

Easily the bounciest performance of the whole event, HONEST BOYZ® absolutely killed it with their entire performance. Opening with their most recent release “TOKYO DIP feat. PHARRELL WILLIAMS”, the group wasted no time setting the mood for a performance that completely knocked it out of the park. Most interesting, however, was at the end of their performance when group founder NAOTO took the mic and gave a genuine speech about the term “otaku” and the culture surrounding it, mentioning that in their own way, everyone at the show was an otaku of some form. The speech has become quite the topic online too, with numerous communities continuing the discussion in their own circles, questioning the negative connotation the world holds.

Just in case the crowd wasn’t worked up enough from HONEST BOYZ® legendary performance, CRAZYBOY and his dance crew took things to new heights with their perfect blend of music, dance, and visuals. You could tell the crowd was feeling it from start to finish, with CRAZYBOY completely owning the stage and showing off his prowess as both a vocalist and dancer. Of course, after NAOTO’s speech there was no way that CRAZYBOY wasn’t going to share his own bit, adding that while many people know him for his on-stage personality, he’d actually consider himself an avid video game otaku.

Of course, this event wouldn’t have been possible without our incredible final act, and I’m sure everyone in attendance would completely agree that they went above and beyond both on and off-stage. Closing out an incredible night, all three members of m-flo took to the stage to perform both new and old songs alike. It’s been a massive year for the recently reformed trio, with the group cranking out a number of top-performing singles throughout 2018. Timely as ever, m-flo presents: OTAQUEST LIVE also fell on the release day for m-flo’s latest single, “epic”, which of course saw an incredible performance on-stage.

We couldn’t be happier with the end result of the event, and everyone in the 5,000+ person crowd at Osaka-Jo Hall was seriously the best. We’ve got two shows down in locations across the globe, and I’m sure we’ve got plenty more to come too. This is only the beginning for OTAQUEST as we continue our journey to introduce both overground and underground culture to new audiences around the world, and we can’t wait to see where 2019 takes us. Everyone that performed at the festival went above and beyond, and you’ll definitely want to be keeping a close eye on each and every one of them in the coming months.