Why You Should Play Katamari Damacy – OTAQUEST Selects #32 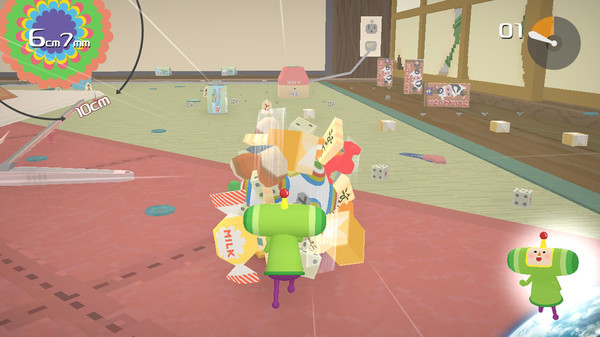 Roll up a chair and let’s talk about what a weird and wonderful game Katamari Damacy is. I say IS, rather than WAS, because it still remains an enjoyable and replayable game.

Katamari Damacy will turn 20 years old in a couple of years (2024). And yet, it remains as fun now as it did when it first arrived. Not many video games can make that claim.

Best of all, you don’t have to pull your old PlayStation 2 out of mothballs to enjoy it. A couple of years ago, Bandai Namco created Katamari Damacy Reroll, which is now available for Steam, Nintendo Switch, PS4, and Xbox. They didn’t make any noticeable changes to it, except to make sure that the low-res graphics would look the same as they did in 2004.

And thank goodness for that. Katamari can keep on rolling for all of eternity, as far as I’m concerned.

I can think of several reasons why Katamari remains relevant in our COVID-19 world, and why you should play it: The game can be surprisingly mellow, especially once you unlock the ‘Eternal’ endless roll mode.

In the game, you’re rolling a ball around and collecting stuff. That’s basically it. It’s a puzzle game at heart, and the levels can be challenging. On the Ursa Major level, my Katamari inevitably gravitated toward the smallest possible bear. It wouldn’t be fun otherwise. But the levels are never Nintendo Hard or overly frustrating.

You’re not shooting any weapons. There are no bosses to fight. Even though levels are timed, the pace feels very leisurely. There are no real consequences for failing a level, other than the King of All Cosmos yelling at you for a bit. Some of the music is also very relaxing. The game can be a great stress-reliever, and we could certainly use more of those.

I must admit, I am biased toward weird games. I grew up in the 1980s, when games were weird almost by default. If you think Untitled Goose Game is weird, you’ve never gotten chased by hot dogs and eggs in BurgerTime. Or used an air pump to literally ‘blow up’ monsters in Dig Dug.

With its bonkers plot and unusual gameplay, Katamari ranks up there with the weirdest games of all time. You play as the tiny, green alien Prince of All Cosmos (or his strange-looking cousins). Your father, the gigantic, obnoxious and flamboyant king, made a royal mess of the universe, and now you have to clean up after him.

You accomplish this by rolling a ball which is larger than you are. The ball gets larger and larger as the game goes on. Living things can get stuck to your ball, ranging from fish to dogs to clowns to schoolgirls. Some try to run away from your giant ball (wouldn’t you?). And they scream when they get caught. Your stated goal is to rebuild stars, constellations, and even the moon.

I haven’t even mentioned the cutscenes, which involve an ordinary family’s reaction to the stars disappearing, or the trippy opening title screen. In the endgame, your ball becomes big enough to collect whole islands, clouds, and rainbows (which shouldn’t be physically possible). By the time you reach that level, you are essentially a kaiju.

A lot of people have commented on how ‘Japanese’ the game is. That’s literally true (Bandai Namco). But that’s not an easy thing to define or explain. For some, ‘Japanese’ is a lazy shorthand synonym for ‘weird’ or ‘unusual.’ And there is something to be said for the Japanese tendency toward the absurd. But there’s more to Katamari than that.

I’ve lived in Japan, and have relatives there. I recognize the house and the neighborhoods in the game as being distinctly Japanese in look and feel. Many of the objects certainly are: yen coins, shoji chess pieces, mikan, takoyaki, daruma, kokeshi dolls, and kotatsu. Less obvious stuff like plastic erasers, pink laundry pins, and vending machines are also given uniquely Japanese designs. Thankfully, they didn’t localize it.

There’s also a certain philosophy to the game. A lot of what you are picking up would be considered clutter. From a certain point of view, the things that you roll up become one with the universe; they become stars. How very Buddhist.

So that’s Katamari Damacy in a nutshell. A simple game, with relatively simple rules and controls, playfully making the world more Zen.