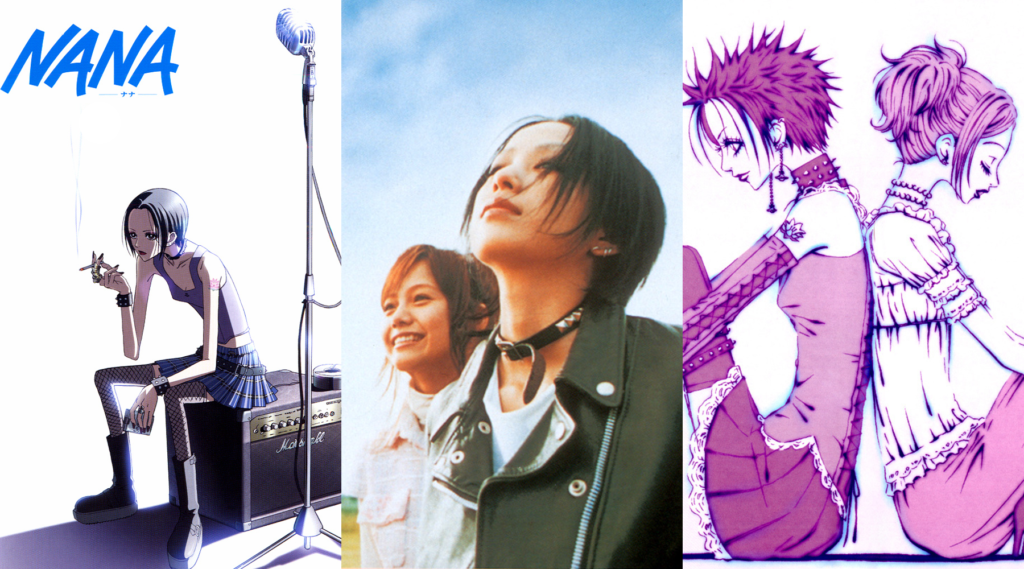 When you think about friendship in anime, what comes to mind is either shonen cliches of pals who put themselves into bodily harm together or subtle slice of life romanticizations of daily school life. Turns out, lots of people just love to see dudes being dudes and ladies being ladies, and who could blame them? At least some percentage of daily anime and manga consumption is driven by wish-fulfillment, and so naturally these types of shows don’t often resemble reality.

As previously discussed in our OTAQUEST Selects about the Paradise Kiss anime, superstar girls’ comic artist Ai Yazawa wastes no time on these superfluous stories. Her career-defining talent of taking a realist josei sensibility to what would be more traditional shojo tales of romance have earned her tens of millions in sales.

Said talent led her to eventually penning her unfortunately unfinished masterpiece Nana, a manga full of love and sex whose most moving relationship would be the flourishing-turned-complicated friendship between its two iconic leads.

Nana Osaki, pictured left, and Nana Komatsu, pictured right, first meet on a crowded bullet train to Tokyo and, despite clearly coming from separate worlds, they open up quickly to one other. When they coincidentally cross paths again when viewing the same apartment (numbered 707), they throw caution to the wind and decide to live together right then and there. With ‘nana’ being the word for ‘seven’ in Japanese, it was clearly fate that guided them together.

Though being entirely different, the fashionable Nana Komatsu moving to Tokyo to be closer to her love and the punk Nana Osaki wanting to make it big with her band The Black Stones, a deep trust quickly blooms between them. Nana O. renames Nana K. ‘Hachi’, after the famous Shibuya dog statue since she’s so puppy-like (Hachi means ‘eight’ by the way), and for a beautiful time the two become inseparable.

Off the bat let us make it clear: Ai Yazawa would never do anything as cheap or as predictable as having both Nana and Hachi fall in love with the same man. She asks much more interesting and much less cliched questions, like what happens to this shining example of female friendship when one Nana gets seriously involved with someone the other can’t stand? What’s a best friend to do when the love of her pal’s life starts standing in the way of everything she worked for? Trials and tribulations rear their ugly heads, and Nana and Hachi rise to the occasion to help each other time and time again, each becoming the other’s biggest strength.

However, Yazawa aims for an adult-oriented realism that dictates that even the best of relationships can shake or fade, despite the best of intentions and love behind them. Also, the series’ surrounding characters, like the determined Yasu, the scheming Takumi, and enchanting but insecure Reira, flesh this world out spectacularly. Even the secondary cast are fully realized people.

On the Series’ Untouchable Legacy

At the time of writing, Ai Yazawa’s Nana ranks the third-best selling Shojo manga ever with about 43 million copies having been purchased. With the first and second place, Boys Over Flowers and Glass Mask, selling approximately 61 million and 50 million copies each respectively, it’s entirely possible for Yazawa’s masterpiece to have closed the gap if it didn’t enter a probable permanent hiatus in 2009 after its 21st volume.

Being incomplete doesn’t stop the masses from still regarding the manga as one the greatest, and it has the sales numbers to back it up. It even won the prestigious Shogakukan Manga Award just two years into its run, placing this comic in the same pantheon as heavyweights Yu Yu Hakusho and Urusei Yatsei.

By being such a hit from nearly the outset, and with Ai Yazawa already gaining a considerable audience from previous works like Paradise Kiss and Gokinjo Monogatari, Nana surely was destined for an adaptation or two down the line. What fans couldn’t have known was how worth watching both the 2005 live-action film and the 2006 anime would be.

Why Each Nana Deserves to Be Experienced

Not too much else needs to be said about the original manga that the first four paragraphs didn’t cover, at least for a brief introduction. Even in the often underappreciated worlds of Shojo and Josei manga, nothing else quite like Nana exists. Yazawa’s sophisticated combination of idealistic beauty and brutal honesty hits everyone who reads it hard. It is a frank look at friendship, romance, and coming to terms with what you can and can’t do in life all in dazzling, ink-heavy dress. The original manga’s story covers the most ground, so if you’ve seen the film or show and want to know what happens next…

The title above conveys a strong statement, but this writer stands firm in their belief: What the Nana film gets exactly right is its depiction of the series’s signature example of a shining and deep female friendship more touching than any romance.

With actress Aoi Miyazaki’s portrayal of Nana ‘Hachi’ Komatsu just a smidge more down to earth than her comic counterpart, and Mika Nakashima’s Nana Osaki a touch more outwardly emotional, their bond becomes not just admirable but relatable; You might as well be watching a documentary about two best friends and all the shared intimacy and comfort that comes with the type of friend you’ll only meet once in your life.

Nana and Hachi’s world comes across so naturally in Kentarou Ootani’s film version, you’ll forget you’re actually watching an adaptation of one of the most popular manga ever, and instead be tricked into thinking you’re taking in a deeply personal indie-film meditating on relationships.

The Anime Brought Something Unique to This Table

Perhaps objectively, with both the film and the original manga as decidedly excellent as they are, Nana’s anime adaptation seems a bit superfluous, despite Madhouse doing total justice to the series as they did with Paradise Kiss.

What makes the anime worth watching, however, despite it following the manga’s story and tone beat by beat, is the music! While voice-acted by Ed Elric’s Romi Park, firebrand and Sakuran star Anna Tsuchiya providing a legendary set of rock beaters for Nana Osaki’s band Black Stones. Olivia turns in quality material for rival-band Trapnest as well.

Sure, the movie had Mika Nakashima’s ‘Glamorous Sky‘, a song that became so widely popular its still sung in karaoke to this day, but Tsuchiya’s tracks like ‘Rose‘, ‘Lucy‘, and ‘Kuroi Namida’, and Madhouse’s renditions of their live performances, perfectly capture Nana Osaki punk energy.

Ai Yazawa’s manga remains unfinished to this day, because of her publically unspecified but said to be serious medical issues. She pens a new illustration or two on occasion for promotional purposes, but a return to monthly serialization doesn’t seem to be in the cards for Nana anytime soon.

At the time, the anime’s first season finished up, with Madhouse saying that they’d make their second season when the story finished, but that ending has yet to come. At the very least, said anime will be making a return to the US Market sometime this summer, and we hope Sentai loads that disc up with as many Anna Tsuchiya-related extras as possible.

In the meantime, we wish for Yazawa’s health more than we do an ending to Nana, though we admit both would be nice. Regardless of the lack of conclusion, what we have of anime and manga’s greatest friendship story deserves to be carried into the future, even in its incomplete form.

Ai Yazawa’s Nana is available from Viz Media, and soon Sentai Filmworks will drop the anime. Good luck tracking down the old DVD release of the movie, though.