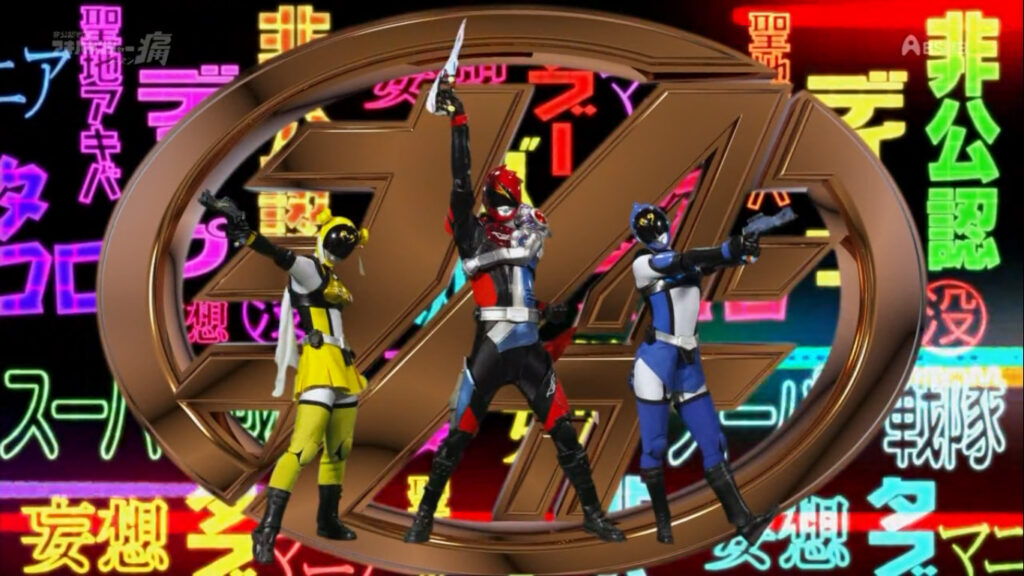 Boys with tragic pasts, engaging in death-defying training, so they can become strong enough to cleave the earth in half with one punch. Girls whose faces grow rounder, eyes wider, and hair more absurd every year. Warehouses of mechs designed to win wars or occasionally kill God. Within the realm of media that otaku so zealously love, there’s a lot you can poke fun at.

While self-deprecating shows have become commonplace now, even in anime’s earlier days, works like Nurse Witch Komugi and Otaku no Video served for some loving laughing-at-ones-self, an ability today’s Japanese cartoon watcher does in spades.

A cousin to anime that comes straight from mangaka great Shotaro Ishinomori, Super Sentai furnishes its own satirical buffet with its clown suits toy robots. With their own baggage, how the Super Sentai franchise found the gall to launch a full-scale roast of Otaku culture in Unofficial Sentai Akibaranger eludes us, but we’re so glad they did.

Akibaranger’s Love for Delusional Otaku Hearts Oozes From Its Core

Always the leader, Akiba Red is Nobuo Akagi, an out-and-proud otaku caught between his lifelong love of Super Sentai and his new love for Very 2011 Anime Girl ‘Aoi-Tan’.

Martial-arts beast, secret Aoi-Tan fan, and high-school girl Mitsuki Aoyagi dons the Akiba Blue costume (who we want to note is brought to life by Kyoko Hinami who more recently starred in Sion Sono’s excellent The Forest Of Love for some amazing contrast).

Rounding out the team is local cosplay legend Luna Iwashimizu, who becomes The Yellow Akibaranger.

They operate out of a small Sentai-themed bar/secret science lab fighting delusions all around Akihabara. Normal off the bat, right?

What Nobuo is holding above is not just a 3D anime figure recreation of the aforementioned 2D anime character Aoi-Tan 1D, but also a gun… and actually, that gun is his Ranger Morpher.

On the surface, it is a clever gag by veteran anime and sentai screenwriter Naruhisa Arakawa, who has headed scripts for excellent non-satirical works like Spice & Wolf and episodic work for the excellent semi-satirical Martian Successor Nadesico.

If we intentionally read too much into the power-move of making a morpher an anime girl, we might conclude that perhaps only someone deeply familiar with both the worlds of anime and sentai alike could come up with such a gag. Throughout the many Sentai series, third to only the suits and Megazords themselves, morphers are iconic. Combining that with an idealized ‘Anime Girl Figure’, invoking the billion-dollar figure sub-industry which keeps Akiba afloat, could only be called divine inspiration.

More than that, said otaku fusion sets the stage for the rest of the show.

We won’t say Unofficial Sentai Akibaranger champions some galaxy-brained deconstructionist take on otakudom, nor does it fully reinvent the comedy wheel, but when a show like this could have coasted on by just making cheap Family Guy style references to various anime and Sentai alike, it can’t be denied that it went an extra few miles to both its comedy and commentary approach.

The Akibarangers are out in the streets of Otaku Shopping Capital Akihabara fightings ‘delusions’, which isn’t just a convenient word used to describe enemies. When ‘real power rangers’ fight ‘real monsters and bad guys’, all the fighting the Akibarangers do takes place inside their own heads. Anyone frequenting the streets of Akihabara’s probably a little familiar with anime’s wish-fulfilling (read; delusional) qualities, but these rangers take said wish-fulfillment to the next level by becoming real-world power rangers to fight made-up bad guys.

Another show might equate fighting off otaku-based mental delusions in Akihabara to a rejection of The Culture wholesale, but Unofficial Sentai Akibarnager instead preaches the opposite. The Akibaranger team ward off delusions that seek to destroy Akihabara not just physically but spiritually.

An early season 1 episode has the team square off against a monster-yakuza group who want less to hurt humans and more to gentrify Akihabara into becoming a second Shibuya, as night-clubs are apparently more profitable and mainstream than maid cafes. Who knew!

Through its satire and comedic stylings, the show might remind otaku to keep their delusions in check, but ultimately it says Akiba and its otaku are a city and culture worth putting your body on the line for! Adult nerds choosing to spend their time and money on dumb anime merchandise is, in fact, beautiful, but we have to be able to laugh at it too. Touting this line, we imagine the show would be more polarizing if it wasn’t so darn funny!

Again, Unofficial Sentai Akibaranger could resort to Big Bang Theory referentiality and fans would still eat up for lack of high(ish) budget sentai parody material and being a live-action tackling of Otaku. Just being set in Akihabara might be enough for many foreign fans to throw it on for a vicarious virtual experience to Anime Disneyland.

Here’s the thing: Akibaranger is actually really funny by itself. A surprising amount of its humor isn’t ‘lol this anime/sentai thing is funny’. It has a ton of body slapstick and verbal wit, and we’ll argue you don’t necessarily need to have seen 30 seasons of power rangers to find a bunch of green suit weirdos awkwardly stumbling around and bantering through stupid hijinks amusing.

Sure, knowing that indiscriminate explosions popping off in the background is a Super Sentai staple just makes the experience all that more meaningful. Regardless, though, of your ranger familiarity, it makes for a good visual gag seeing these anime-loving justice defenders trip and fall because of the explosions that normally go unnoticed by ‘official’ sentai teams and then start pondering why these explosions occur in the first place! 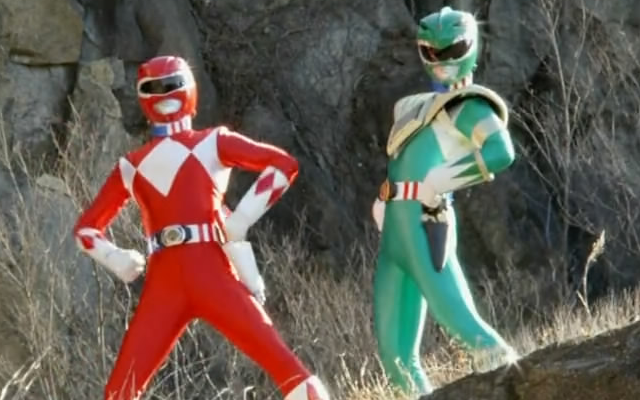 Die-hard adult, western Super Sentai fans are all too aware of Unofficial Sentai Akibaranger and most of them are still clamoring for a third season. With only two 13-episode seasons, Akibaranger’s biggest crime is not having enough of itself for you to watch. It’s second-biggest crime is itself not being available to western fans outside of importing discs.

We forgive this show for its crimes because, ultimately, you dont have to be a Super Sentai fan at all to enjoy this one. As long as some facet of ooey-gooey otaku culture spoke to you at some point, you’ll find fun, joy, and acceptance in Akiba Power Rangers. Their delusions see this trio fighting the Rita Repulsas of their mind. Perhaps your mind sees you becoming the Hokage or a Gundam pilot, though these days paying rent and not getting Corona weighs more heavily than becoming the next Goku.

Still, if you’ve read this far, we know that you have otaku passion inside your body somewhere, and with that being the case, we can whole-heartedly recommend this Silly Super Sentai roasting and loving of anime fans to you.