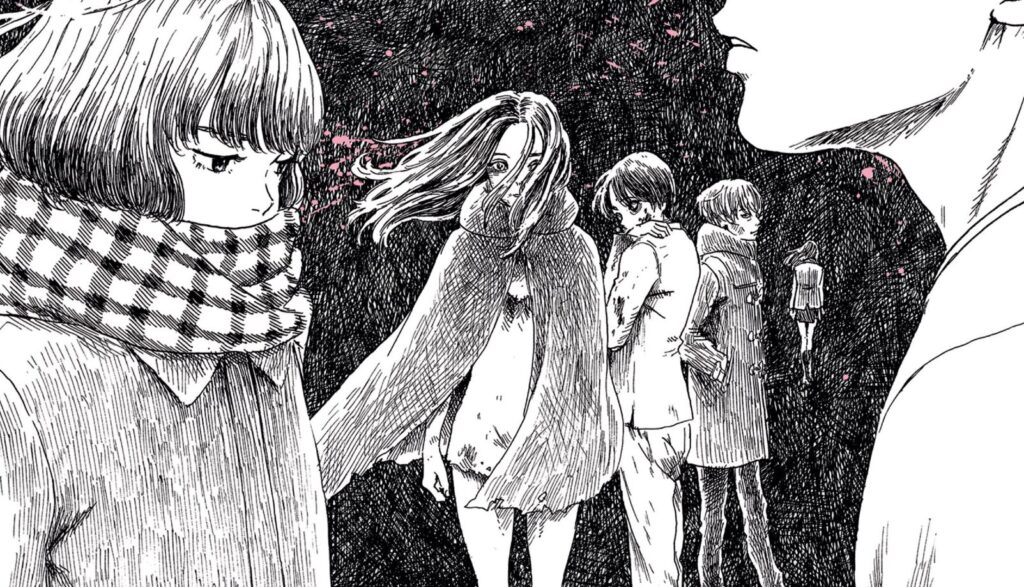 Happiness ranks at a well-earned third place in cult author Shuzo Oshimi‘s harrowing bibliography, behind The Flowers of Evil and Blood On The Tracks. Calling a work of art ‘third place’ doesn’t portend encouraging newcomers to try it out, but that ‘third place’, in context with who Shuzo Oshimi is and their consistently sublime comic output, means you should read it. When even the author’s secondary work, like Okaeri Alice, makes for a lovely read, imagine how salient the third most affecting thing that author has ever done is. Beyond an imaginary ranking on a listicle that doesn’t exist, Shuzo Oshimi’s Happiness stands apart in his stunning bibliography for its downright innovative use of manga art, not as heavily focused on his stronger narrative works. Oshimi is known for his musings on surviving adolescence, on the undeniable weight of sex, and on flirtations with uglier halves of the human heart with the lushest of penwork. Here you can see what happens when they push their art past known limits.

Except for when it purposefully depicts something else, manga art’s primary function is to convey ‘what’s happening’ in any single moment. For the record, our convenient phrase ‘what’s happening’ comprises a broader definition than just a physical action, or a line of dialogue. ‘Happening’ could also include moods, atmospheres, subtexts, exposition, emphasis, transition, poetry, excess, and the unspoken, though panels do in fact depict all other sorts of wide-meaning words besides these. With some exceptions, manga needs art and a story to be itself and those balances aren’t always equal. Art serves to bring to the page the narrative and characters a mangaka wants to share with the world, while other times people and stories are the excuse to unleash brilliant art piece on the readers; perhaps some can utilize the best of both worlds. Maybe Shuzo Oshimi would disagree, but Happiness falls into the second camp (at least according to what it does best), though that doesn’t mean what the comic talks about suffers as a result.

Vampires populate the carefully rendered black-and-white corridors of Shuzo Oshimi’s Happiness, but calling it ‘a vampire comic’ feels reductive. Just a sparse handful of bloodsuckers actually turn up in the manga, and only two who hadn’t started off a human. A typical manga-aged boy, Makoto, meets a hauntingly beauteous immortal night dweller, Nora, who decides to turn him instead of feed on him, with the series kicking off from there. Only the broadest of allusions are made as to any greater faux-historical vamp culture, with no Vampire Knightesque noble legacies or Vampire Hunter Desque ‘good ass action’. Instead, Oshimi uses the advent of direct and indirect vampirism in through lives of a select few as an elaborative road to their usual subjects, such as flourishing sexuality and desperate struggles with the dark. What’s different here? These taboo yet familiar themes get dressed up in the most regal and shining of attires and then are promptly blasted through a kaleidoscopic meat grinder, leaving the resulting sequential illustration not only looking spectacular, but pushing the boundaries of what manga art can convey.

Shuzo Oshimi flips between two art modes throughout Happiness, which for the sake of a hook we’ll call ‘Regal’ and ‘Grinded’. Halfway through serializing their life-changing The Flowers Of Evil comic, Oshimi seemingly made the conscious decision to just become a better, more detailed artist. They began to rely less on easier-to-produce digital art, opting to pick up pen and ink to craft even the most everyday of occurrences with love and care, making for a palpably splendid transformation. The scene pictured above might not be ‘every day’, unless you yourself get caught up with vampire worshipping cults, but this indulgent style illustration is Happiness’s default. With just about everything from the mundanities of school life to vampire attacks treated with an equally grand approach, how could you call what Shuzo Oshimi does anything but ‘Regal’? Marvelous as it is, plenty of manga are home to wonderful, decadent art, and to say Oshimi has another trick up their sleeve that pushes this comic past conventional limits understates their work.

The most regal of objects… if you took a sledgehammer to a Queen’s crown, wouldn’t the leftover mess still be beautiful? You might also ask, what if vomit splattered onto the sidewalk was art? As the manga ebbs and flows, Oshimi regularly puts that picturesque ‘regal’ art through a meat-grinder to encase something new. Playing with techniques first employed in the very final chapter of The Flowers of Evil, Shuzo Oshimi takes advantage of his always tense vampiric stage to go off the walls with their draftsmanship. This ‘grinded’ art doesn’t always look like the scary man above; bodies, faces, surroundings, atmospheres are abstracted and contorted in a way that imparts intentional artistic whiplash unto the reader. Not only do these ink littered pages exist to make you say ‘oh damn’, but the author also employs them to utilitarian use with a unique narrative function. Their Happiness goes into its ‘grinded’ mode to convey beyond ‘what happens’ but also ‘how what happens’ is experienced. Moments of extreme fear, delirium, and other such incentives are not only conveyed to the reader, but how they’re specifically internalized in the world of the comic neatly becomes accessible through abstraction. Others utilized multiple art styles in manga before, Yoshihiro Togashi’s Hunter x Hunter a big champion of such, but we can’t think of another example that does so as liberatingly or as uniquely functional. (Ultraheaven, maybe)

Shuzo Oshimi the illustrator has never so wildly flourished as much as in Happiness. Cycling through the ‘regal’ and ‘grinded’ modes, they’ve created a comic with a more sophisticated element of immersion than most. You don’t just get to see what happens to these vampires and friends of vampire; for split seconds you get to be them.

While most of the article has been spent lauding the art for both its rich aesthetic and transcendental function, the story it conveys could speak for itself. In a reality where few vampires exist, a morally gray spectrum asks whether instinctive brutality towards humans or intentions horrors of the man-made variety are the true evil. Plus, you have a whole transference of blood as a thinly veiled sexual metaphor going on spins one of those themes Oshimi can prattle on about with the best of them. Absolutely not for kids or the weak of heart: amidst these luminous landscapes and avant-garde splash pages, you’ll find a whole mess of blood, torn limbs, and the like. If you can find beauty in the dark or are looking for something genuinely different, we’ve spent an article pitching this manga recommendation.

Happiness is available in English thanks to Kodansha Comics.