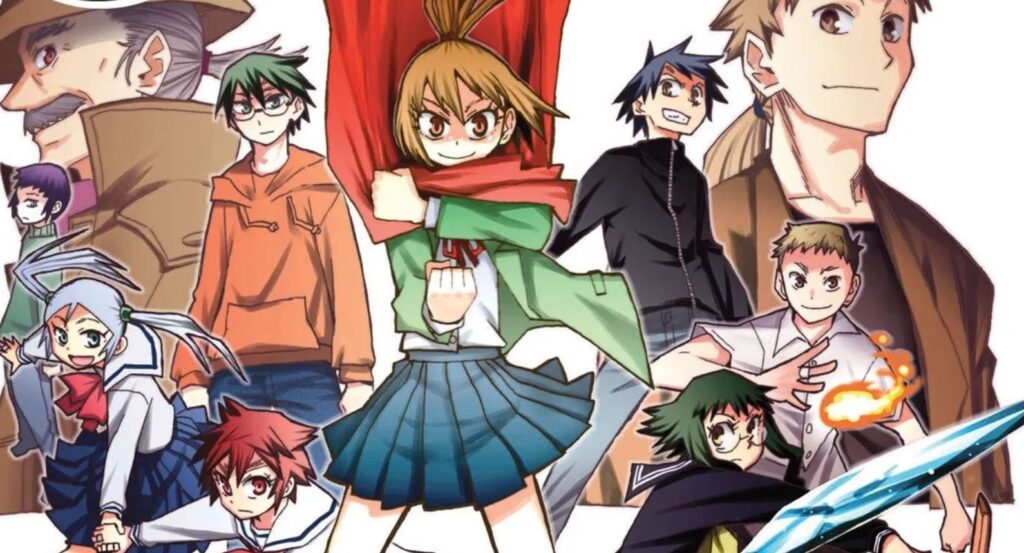 Of course, when we say people who read manga, we mean those who don’t treat the medium as some lesser accompaniment to anime, and instead prioritize it as the full-fledged independent and rich art form that changed our very world. These are the readers who know Lucifer and the Biscuit Hammer.

The manga’s remained something of a cult classic in Japan, despite ending over a decade ago. In the west, it enjoys a small but passionate following that will launch convoluted diatribes about why you should read Lucifer and the Biscuit Hammer. Our own social media wizard Carley ranked the show second on her list of the best fantasy manga under 10 volumes (personally, I’d ring it up one place higher were it my list).

Gripes aside, several OTAQUEST writers going ride or die for the series alone makes it OTAQUEST Selects material, but not enough westerners have read this one due to lack of an anime and that needs to change. Immediately.

Lucifer and the Biscuit Hammer stars college-aged ‘knight’ Yuuhi Amamiya; Samidare Asahina, the ‘Princess’ he’s so supposed to protect who is degrees stronger than he; and a smorgasbord of other ‘knights’ given the same task. Each knight comes with their own conveniently talking animal sidekick/mentor, and together with the princess they’re to protect the world from the mysterious mage Animus, his havoc-inducing golems, and the giant ‘biscuit hammer’ hanging in the sky set to render the earth to dust if the knights can’t defeat Animus in time.

The twist? The ‘princess’ and her closest knight Yuuhi are secretly planning to destroy the world themselves after they take out apocalyptic enemy number one.

Yuuhi and Samidare, already a natural match, will deepen their relationship as they fight together across a 10-volume journey, while trusting each other with their deepest secret.

That instant bond between Yuuhi and Samidare propels the early portions of the series, immediately showcasing Mizukami’s talents for mixing decisive action with direct dialogue to great success. Truly, it remains a fascinating friendship throughout.

Surviving an abusive grandfather, we find Yuuhi a rather jaded young adult. When it comes to the rather sickly Samidare, death always having been potentially around, she wants to do as much as she possibly to rock his world. An analogous relationship can be found in the Kyon and Haruhi dynamic, and it’s maybe just a coincidence that The Melancholy of Haruhi Suzumiya and Lucifer and the Biscuit Hammer come from the same era.

As the often Goku-minded Samidare draws Yuuhi out of his shell, however, the individual relationships he develops with the other knights, all distinctly different people, change him further. He becomes a sort of disciple to the laid-back fighter genius Hangetsu Shinonome and a rival to his demonic younger brother, Mikazuki Shinonome. He begins to slowly heed the advice of Nagumo Souichirou, a middle-aged knight facing unemployment in addition to the direction of the world.

Later on, Yuuhi’s able to help draw Akane Taiyou, one of the most troubled of the knights, out of his own shell!

Hell, even his bond with his Lizard compatriot becomes as nuanced and moving as any of his human friendships!

Not only do oodles of engaging and memorable characters leap off the page in Lucifer and the Biscuit Hammer, but mangaka Satoshi Mizukami uses their myriad dynamics to squeeze gallons of sentiment out of the relatively short manga.

One of the most underrated comickers in the game, Mizukami knows how to force the tears in an instantaneous flash. With near surgical precision, he instinctively knows when and where to place the exact minimum amount of words to unleash the maximum amount of emotional resonance onto the reader without ever treading into cheap, or ’emotionally manipulative’, narrative territory.

With different nuances flourishing in each of Yuuhi’s relationships with the other nights, this series runs the sentimental gamut, despite a certain lack of artistic polish.

We’d be lying if we called Satoshi Mizukami’s manga art ‘lush’ or particularly ‘sophisticated’, but that doesn’t keep it from being evocative. Well aware of his artistic limitations, Mizukami concerns himself more with making effective manga than cool pictures. Despite retaining this rough sketchbook quality, he knows how to pen facial expressions that speak a thousand words even when they’re not pretty. The level of craft in his paneling and timing runs much deeper than the sketchy art-style might portend at first glance. His manga needs to be properly read, not just looked at, for one to understand his magic…

Having graduated from an actual manga creation program in his university, he knows the technical ins and outs of making manga, with Lucifer and the Biscuit Hammer being a mangaka’s manga.

A beautiful illustrator could make garbage manga, and a sketchbook doodler could come through with the most interesting series of all time. Satoshi Mizukami didn’t go to art school, he went to manga school, and he knows how to min-max his comics to perfection.

One might actually compare the Mizukami affect to Makoto Raiku’s Zatch Bell (underrated compared to its shonen contemporaries), which similarly used a downright cartoony art style to usher in the waterworks. Both it and Lucifer and the Biscuit Hammer prove manga are more than the sum of their parts: essential and direct dialogue coupled with rough illustrations that convey what it needs to, all delivered via a colorful and varied series of characters.

Upon rereading that last sentence, it’s clear it doesn’t quite capture what makes Biscuit Hammer so special and so essentially manga. You’ll actually have to read it if you want to experience it for yourself.

You can read all of Lucifer and the Biscuit Hammer on Crunchyroll. Yes, read. You Crunchyroll users should be taking advantage of its underappreciated manga offerings.