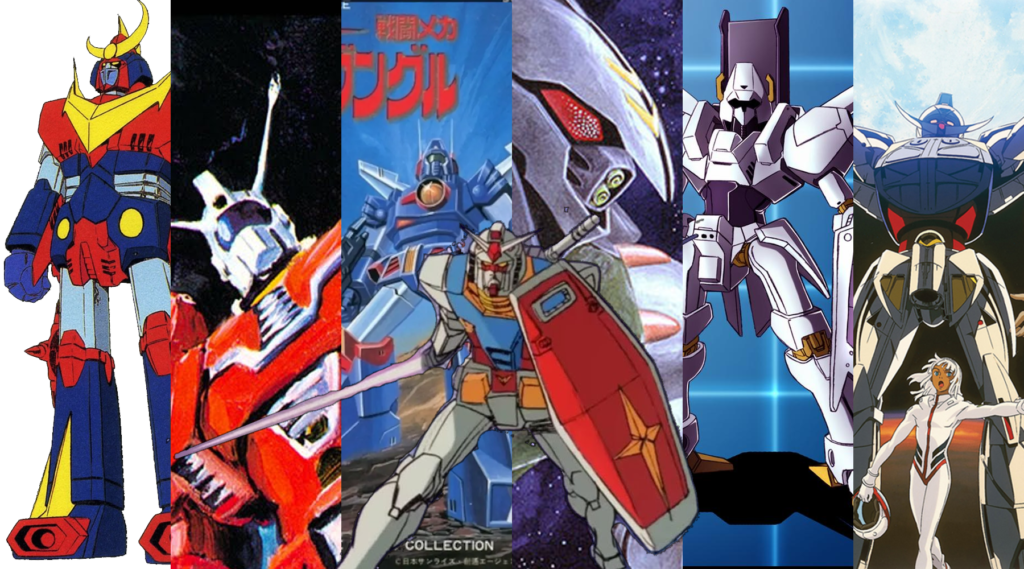 The Other Robots Made by Gundam Creator Yoshiyuki Tomino

Yoshiyuki Tomino’s name should be shouted from every mountain top and every anime convention staircase, for he is one of the greatest. Getting his start in animation in the early 60s working under Osamu Tezuka himself, the Mobile Suit Gundam creator stays busy today even at 79, hacking away at the five-part Reconguista in G film series. Not only did the affectionately named ‘kill ’em all Tomino’ create a highly influential and beloved billion-dollar franchise, but his transformation of the mecha anime sub-genre from the Mazinger-tinged Super Robot style to the Real Robot anime dealing with the horrors of war and whose stories resonate with people to this day. Without Gundam and his subsequent work, we wouldn’t have Evangelion, we wouldn’t have Macross, heck we probably wouldn’t have Cowboy Bebop. However, the original Gundam and its subsequent sequels aren’t the only works in his canon responsible for that transformation.

Before we get into the weeds, it’s worth clarifying we’re using the word ‘create’ a little loosely. He directed all of and wrote on many of the examples we’ll be sifting through today. It’s not a complete list, because Yoshiyuki Tomino worked on a lot of anime. He’s not a mechanical designer, however, and for each mech in question we’ll be giving full credit where credit’s due. But even the work of famed mech designers like Kunio Okawara, with whom Tomino worked with closely for years, wouldn’t have been the same without the auteur calling the shots. He might not have drawn the original Gundam RX 78-2’s line-art, but it’s first and foremost his baby; Really, all mecha anime 1979 and onwards are.

First comes first though; we need to look at the early years.

They don’t make robots like Zambot 3 anymore, an early design by the aforementioned Kunio Okawara who’d go on to put the Gundam design to paper. Invincible Super Man Zambot 3 along with Invincible Steel Man Daitarn 3 (and before you ask no neither had a ‘1’ or ‘2’) were Yoshiyuki Tomino’s first real foray into the flourishing mech anime sub-genre popularized in the mid-70s by works like Tetsujin 28 and Mazinger Z. Produced in 1977 and 1978 respectively at Sunrise (then called Nippon Sunrise), these two shows were direct ancestors to Mobile Suit Gundam. While they’re still spiritually within the realm of the ‘Super Robot’ paradigm (more superheroic and less PTSD-sustained-from-war in to oversimplify it) you can see early traces of Tomino trying to do his thing here. We say early, but he’d already been a veteran, (15 years since starting at Tezuka’s Mushi Pro) and it was these two anime, not Gundam, that earned him his nearly half-century-old ‘Kill Em All Tomino’ moniker.

The romantically titled Space Runaway Ideon; Here we might have Yoshiyuki Tomino’s second most influential creation if we conveniently ignore literally every single Mobile Suit Gundam sequel he’d go on to create. Ideon premiered just months after Gundam, and at the time that series had yet to become a hit, with its original episode vastly cut. By the time Ideon started, Tomino may well have been on thin ice at Sunrise but that didn’t stop him from exerting his always grand version. With a design by ‘Submarine’, Ideon the robot always forgoes super-robot aesthetics completely and helped to usher in a visual style we’d see in Macross and the like. This time, Tomino leaned even heavier into esoteric elements than he did in Gundam, which, despite being a realistic portrayal of war, also featured psychics who were a ‘new type of human’. Featuring robots being worshipped as gods and much of the literal universe being destroyed, this robot anime was directly cited by Hideaki Anno as an influence on Neon Genesis Evangelion.

Perhaps less of an influence on the anime nobody can shut up about was Combat Mecha Xabungle, despite being something of an Ideon spin-off. Intended to be more light-hearted (for Kill Em All Tomino standards anyway) you could call this Ideon’s Mobile Suit Gundam ZZ to its Zeta Gundam. Sure, you had Kunio Okawara making the robots, but designs like the ones above just weren’t pushing people towards buying model kits as Gundam would. Thankfully, through those very sales of plastic snap-together kits that allowed you to make toys by your lonesome, Mobile Suit Gundam became a retroactive hit, and we’d eventually be seeing more of it.

Despite it not being Yoshiyuki Tomino’s objective best, there’s still a lot to in Xabungle: for one, the word ‘Xabungle’ is extremely fun to say out loud. Try it! Xanbungle. Additionally, the work had a ‘space western’ aesthetic and maybe in some vague way it would lead to another ‘Cowboys in space’ anime being animated by Sunrise years later.

Yoshiyuki Tomino had a few more ideas to hash out before giving in to demand and returning to Gundam‘s Universal Century. One of these was Aura Battler Dunbine, which launched its own continuity in Byston Well, and eventually would come to be shared by the notorious Garzey’s Wing, perhaps the best so-bad-it’s-good anime. We digress, as Aura Battler Dunbine’s quite a good show, something of a proto- Escaflowne, in which Tomino acted on the genius idea of mixing mechs and classic fantasy story-telling. You had a whole other world dominated by magic and faeries, that always happened to have these Dunbines designed by Kazutaka Miyatake who was fresh off the original Super Dimension Fortress Macross. Less of a ‘horrors of war’ story but still a much more realistic look at what would happen if some dude was transported to fantastical land and made to fight (today’s ‘Isekai’ swill), Dunbine was Tomino exploring new territory.

What followed was Heavy Metal L-Gaim, which probably didn’t take its name from a certain alternative magazine turned alternative animated cult classic film. Animation technology was steadily increasing, with shows looking more pristine and featuring more complex animation as the 80s went on. Consciously or not, Yoshiyuki Tomino tapped a young Mamoru Nagano (who’d go on to launch his breath-taking magnum opus Five Star Stories in addition to designing the iconic Zeta Gundam) to apply his eccentric styling to both the show’s mechanical and character design, making L-Gaim the best looking robot show on TV yet. With a unique visual style in hand, Tomino felt comfortable to return to what he knew with additional artistry; Military mecha action with a whole lot of character deaths coated in a fresh layer of paint. Seemingly, it just made sense at that point for Tomino to finally go back to making Gundam, which he would for years after.

From craft-thoughtful robot shows like Ideon and L-Gaim to the creation of Mobile Suit Gundam and then to his personal mid-80s through early 90s Gundam renaissance period, Yoshiyuki Tomino constantly strived to create works that pushed the envelope in storytelling and presentation. You don’t succeed every time (especially when you have over 20 directorial credits to your name), but he, more than most, pushed what could be done in the mecha sub-genre and our cherished medium as a whole.

His entire creative being, the conscious intellectual who wanted to speak against war and the artisan who saw the value in presentation, came to a culmination in 1999’s Turn A Gundam. We’re cheating a little by putting a ‘Gundam’ show on the list, but Turn A was the creator of Gundam’s ideal reimagining of Gundam after letting other animators do their own interpretations of the series, like Wing and G Gundam, for half a decade. He incorporated a little of every show he had ever made into this one. With an elegant work of mechanical design helmed by the late great Syd Mead of Blade Runner fame in tow, Tomino crafted a show that seamlessly blended all the ideas he ever flirted with; Beauty for its own sake, wonders of land not our own, the pains of war which had yet and still has yet to dissipate in our world, and the worshipping of the mecha body, truly Turn A Gundam is everything Gundam and Mecha could strive to be.