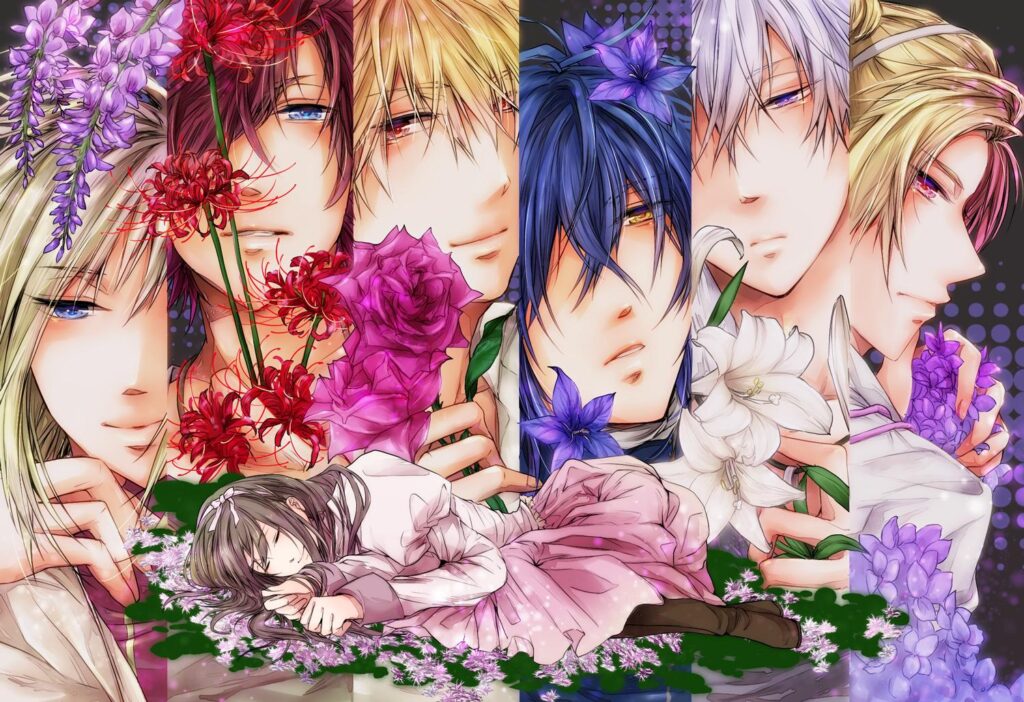 Otome Games: A Brief Guide to a Bishie-Filled World

Hey there! It’s your girl Naja B., OTAQUEST’s resident otome fangirl, and today I am bringing you a quick (but not dirty) guide to the bishie-filled world of otome games! So, if you’ve been curious about the genre or you’re a newbie looking to make sense of it all, this is the guide for you!

What Are Otome Games?

Let us assume you know absolutely nothing about otome games. Should we start with a definition? Otome games (乙女ゲーム), literally translated to ‘Maiden Games’, are a subgenre of narrative-based games that are primarily made for and by women. Sometimes shortened to ‘otoge’, these games share a lot of similarities with reverse harem media, in which a single female protagonist can date/romance a group of super mega foxy hot men, known as bishounen.

While romance is the main draw of otome games, that is just one aspect of the gameplay and at their core, otome games are better known for their immersive stories. Think of them as ‘choose your own adventure’ romance games.

The very first otome game was Koei’s Angelique series developed by Ruby Party for the SNES in 1994, breaking into the then very much male dominated industry, to deliver a gaming experience that would appeal to women. Game director Keiko Erikawa and her team ushered in a new age of gaming, by creating games that catered to a demographic that was (and to an extent still is) largely ignored by the greater gaming community. While Angelique is technically a resource management game, it has a shoujo inspired art style and a harem of hot boys that makes it very clear that the game was made for us ladies. The series went on to be a huge success in Japan.

The genre has since grown both within Japan and internationally. In 2006, Two-Five released the first English language localization of the historical fantasy otome Yo-Jin-Bo for PC. Then, Idea Factory and Aksys Games released Hakuoki: Demon of the Fleeting Blossom in 2012, which single-handedly spearheaded the otome boom in the West. Now otome fans get a pretty consistent stream of otome games each year, and there has even been an emergence of Original English language otome games, created by independent developers targeting specifically a Western audience.

So now that we’ve covered what otome games are, let’s go over how otome games work by going over the gameplay and some common tropes.

Most otome games tend to follow the same basic structure: you play as a female protagonist and you pursue a group of good-looking guys, each of which corresponds to a unique branching storyline, referred to as a route. Some games, like Voltage Inc’s My Forged Wedding give you the option to choose a route up front, but in most games, your choices in a prologue or common route determine which of the routes you end up on. For example, Piofiore Fated Memories and Collar x Malice both have extensive common routes where you interact with all the love interests.

The choices you make in a game, from simple actions and responses, help you build the relationship between the main character and your chosen love interest. Sometimes the choices are pretty straightforward, like whether to walk home from school with a guy or agreeing with his side of an argument, while in other instances your choices are meant to convey a specific personal characteristic or trait that will be appealing to the guy you’re pursuing.

Each choice you make helps determine which of the route’s outcomes you achieve, and, in most games, there are three types of endings: Good/Best, Bad/Tragic, and a Neutral/Platonic ending. Some games also throw in a True or ‘Golden’ Ending that sums up the events of the entire game and usually has some big reveal that completely changes the tone of the entire game. The Otomate localizations are well known for doing this, taking what at first seems like a pretty lighthearted romance game and turning it into an emotionally heart wrenching drama… here’s looking at you Café Enchante.

Because there are so many endings to unlock, otome games lend themselves to multiple playthroughs and ‘saving’ regularly is highly recommended. There is nothing more frustrating than playing a game for 10+ hours only to land the ‘Let’s be friends’ Bad Ending.

But don’t worry, there are usually a variety of beautiful men to choose from and they all fit into one or more of common character archetypes. Almost all otome games have an oresama Alpha Male type, the boy next door/Childhood friend, the yandere, the genki upbeat guy, the playboy/flirty type, the cool and aloof kuudere, and my favorite, the megane (glasses boy). This is not an end-all list, but it’s pretty safe to say that if you have a type, there’s more than likely an otome boy that will fit the bill.

Each storyline is tailored towards the guy you’re pursuing and usually focus on a personal issue or trauma affecting that character. A love interest, for example, may be hiding a dark secret that prevents him from opening to other people, and through the power of love he learns to break free from his past. It’s an oversimplification, but you get the gist. Gameplay time can vary ranging from 2 to 5 hours for shorter games to up to 40 for most standard otome games. Poni Pachet’s OZMAFIA!! will set you back a cool 60+ hours to full clear.

While romance is the main draw, otome games, like most media, fall into different categories and genres. Some have gritty action heavy storylines, like in Collar x Malice where you play as a police officer investigating a series of grisly murders, or like the Hakuoki series where you fight alongside a group of swordsmen known as the Shinsengumi. Then there are others, like Period Cube where the whole game takes place within a virtual fantasy RPG, or Hatoful Boyfriend where you can date pigeons (it sounds weird, but it’s a surprisingly deep game, trust me). And there are of course your generic high school rom-coms and office romances too. Chances are if you can think of a storyline and a romance, there is probably an otome game about it.

Where to Play Otome Games

Tthe most common question I get from folks new to the genre is, ‘Where can I play otome games?’ and the short answer is: Just about anywhere you play your other games. Otome games are available on quite a few gaming platforms. In recent years, the Nintendo Switch has been a hub to most major otome game localizations, but you can also play them on mobile devices like your smartphone or tablet, or on your computer through direct download and Steam.

Most of the console and PC titles are commercial releases that will set you back between $39.99 and $60.00, but there are more affordable options too. Freemium mobile otome are always great if you don’t want to spend any cash (though, with the in-app purchases and other common mobile game mechanics, you have to have a lot of patience if you’re going to get through them).

A World of Bishies Awaits

That’s it for my brief guide to otome games! It can seem a bit daunting at first, but now that we’ve covered the basics, you’re ready to romance bishies like a champ! Truthfully, don’t worry too much about the logistics and just have fun; the most rewarding part of playing otome games is diving in headfirst and just seeing where the journey takes you. This is your story Heroine-in-training, make the most of it! Your rose-colored romance adventure is just beginning!

If you’re looking for some games to start with, I have quite a few otome game recommendations over on my blog that are prefect for cutting your teeth on, so check em out! Until next time!

Nintendo Wants You To Play Otome Games on Nintendo Switch