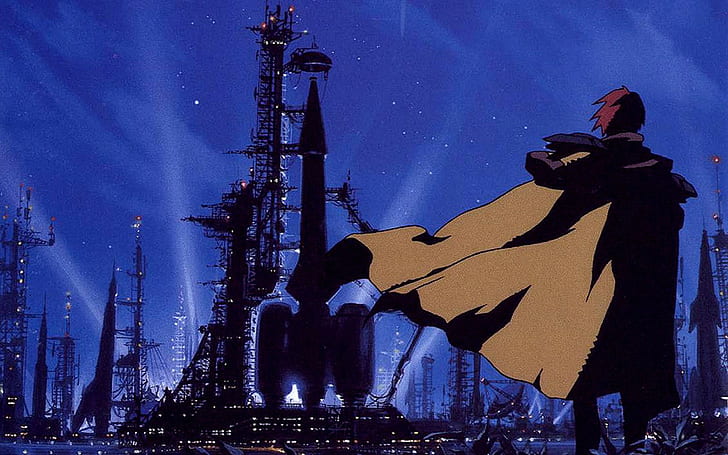 Gosh, Outlaw Star was cool. With its group of occasionally lawless commotion makers flying about wondrous outer space in a somewhat episodic manner, what’s not to love? Too bad Sunrise decided to cannibalize its own show’s potential as a ‘best-ever’, three months into its six-month run, by releasing a premium version of Outlaw Star called Cowboy Bebop. Though rougher around the edges than its three-month younger rock-star sibling, it takes a more visually expressive route with all sorts of purples and pinks, making those space shots pop with wild imagination. That paired with a series of glorious fashion disasters make the show a revisit worth your time, but in its 26 episodes, one quietly rests as one of the ‘best-ever’ episodes of anime.

Outlaw Star Episode 15, subtitled ‘The Seven Emerge’, sees Gene Starwind, said outlaw of the series, challenged to a duel to the death. The viewer knows, but Gene doesn’t, that the challenger hails from a group of deathly dangerous assassins, each with their own trademark skill. Wait, didn’t other late 90s space hijinks show Trigun also feature something similar? No wonder Outlaw Star fails to get remembered as much as it should! From the challenge to the duel, Gene quietly ruminates on the challenge as the fear of death slowly creeps into his psyche. He drinks it off with an old man in a bar, clumsily pushes away his robot not-lover, and finds himself sweat-panicked in bed before finally embarking on that duel.

Gene’s self-haunt as he contends with possible death comes through in his actions, and not in Shinji Ikari style self-narration. As much as I love a good Ikari thoughtalogue (thought monologue, get this one in the dictionary), the nuancr of seeing this adult shonen-seinen borderline outlaw impulsively act out impresses me more and more the older I get; it strikes at an uglier facet of humanity most Japanese animation conveniently looks away from. Perhaps though, the single moment in which Episode 15 of Outlaw Star outdoes its already imaginative and charismatic self is when one character who may or may not be the big bad of the episode, upon losing a duel, asks Gene to not kill him, not out of cowardice, but so he can blow himself up as to not leave an ugly corpse. It’s a four-second scene that adds four hours worth of character.

‘The Seven Emerge’, and every other episode of Outlaw Star for that matter, were made during a five-ish year period I and nobody else call ‘The Sunrise Scratch’; A friend of mine called Escaflowne’s animation ‘scratchy’ which, to me, has been the perfect adjective to describe Sunrise’s animated output from 1995 or so until they switched over to digital animation with the rest of them. One of the most prolific runs of animation ever, Outlaw Star sits in immediate company with the aforementioned The Vision of Escaflowne, Mobile Suit Gundam 08th MS Team, and the even more aforementioned Cowboy Bebop; It occurs to me I should write about ‘The Sunrise Scratch’ but in the meantime, Outlaw Star episode 15 is one of the studio’s signature scratches that you should watch even if you don’t want to watch one through fourteen.

You can watch Outlaw Star ‘The Seven Emerge’ here.