If there’s one thing bands were highly skilled at in the 80s it was breaking up. So it may not have been too big of a shock when Kenzi and The Trips broke up just four years after their formation. Their breakup though did leave one lasting impression on Japanese Rock. No, I’m not referring to this quintessential 80s album cover: 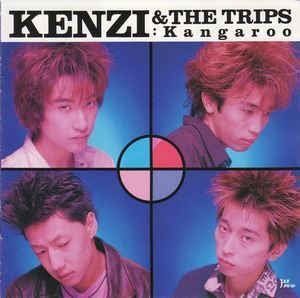 Shinichiro Sato (drummer) decided to form his own band. He brought in Sawao Yamanaka (vocalist) and Yoshiaki Manabe (guitarist) for the project. That’s how in 1989,  the pillows were born. Yes, dear reader and my overworked editor, the band name is all lowercase. No typos here!

It took nearly a decade for the pillows to really find what is now known as their quintessential sound. Their earlier work like Living World and Kool Spice is nothing to scoff at, but Please Mr. Lostman is where the pillows really hit their stride. The album was released in 1997 by Oricon records and includes hits like ‘Tiny Dancer’ and ‘Moon is Mine’.

To best understand just how much their sound changed from their earlier records, listen to their hits ‘Girlfriend’ (1995) and ‘Stalker’ (1997).

While both have their merit ‘Girlfriend’ sounds like elevator music compared to the edgier sounds and lyrics of ‘Stalker’.

Please Mr. Lostman might have been the band’s big break, but in three years the band would become Japanese rock gods with one single ending theme song.

FLCL (pronounced Fooly Cooly) burst into the anime scene in 2000. Its release had a companion manga and novel. The series did well in Japan but it was strapped to a rocket ship when it arrived on Adult Swim.

FLCL arrived at Adult Swim during a golden era for the network and their anime programming. It was an instant hit that garnered mega-fans. The series was only 6 episodes long and audiences couldn’t get enough. It wasn’t just the story and characters fans were obsessed with. It was the soundtrack.

The pillows were brought on to create the music for the show. In a recent interview, Sawao Yamanaka admits that the collaboration almost didn’t happen for one simple reason, the band wasn’t really interested. The band laughs remembering that they were rude in the beginning and they all agree they just “didn’t get it”.

FLCL’s director Tsurumaki was a fan of the pillows and asked them to send over some ideas. The band knew very little about anime, but figured it wouldn’t hurt to send over a new song they were working on. The song was ‘Ride on Shooting Star’.

‘Ride on Shooting Star’ became the show’s ending theme and a staple for anime fans.

The pillows also wrote ‘I Think I Can’ for the anime and licensed their three most recent albums to be used in the show. The result was one of the greatest anime soundtracks of all time. If you disagree you can let me know at [email protected], I check it regularly.

The collaboration introduced a whole new fanbase to the band’s work and the pillows toured across the US as a direct result. FLCL and the pillows’ relationship wasn’t over yet though.

FLCL returned to the small screen in 2018 with 2 new seasons. Season 2 was titled FLCL Progressive and was followed shortly after by the 3rd and final season FLCL Alternative. The new seasons were premiered on Adult Swim’s Toonami block. Most of the team, including director Tsurumaki and Production I.G. returned for the project.

There was one other major return to the series. The pillows were in charge of music again. At this news, the internet let out a collective cheer. There was one key song that wouldn’t need to be rewritten though. FLCL Progressive and FLCL Alternative kept ‘Ride on Shooting Star’ as their theme song.

While it’s difficult to talk about the pillows without mentioning FLCL, and vice versa, it’s important to note that the band is a standalone success. The band celebrated their 30th-anniversary last year and marked the occasion with an exhibit chronicling their decades-long career.

They did what few bands could, they made it out of the 80s alive. And they have 22 studio albums and endless anime cred to prove it.

the pillows
The Pillows
Join Our Discussions on Discord
Join Now

Adult Swim is Bringing The Pillows for North America Tour