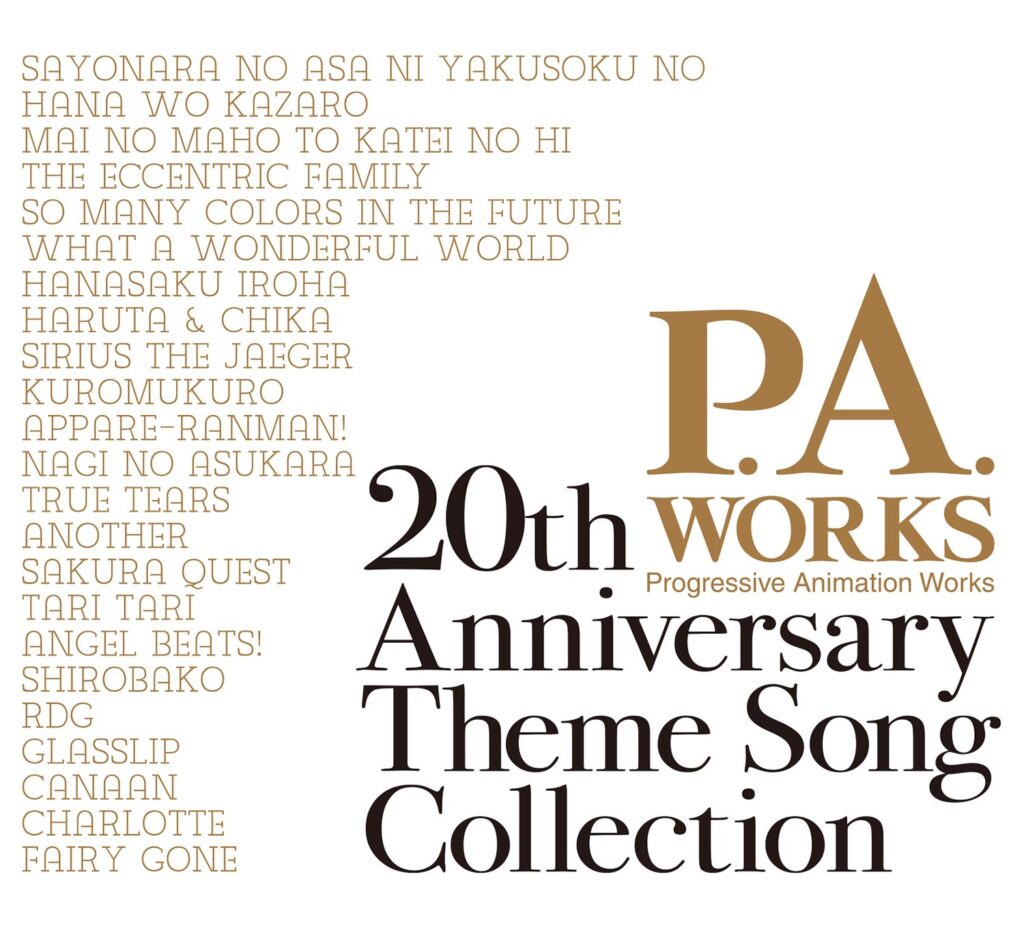 Any good anime series ought to have good opening and ending themes. This month, animation studio P.A. Works will release a multi-disc album featuring 58 anime theme songs on four CDs.

The P.A.Works 20th Anniversary Theme Song Collection is pretty much what the title says it is. As of November 2020, the animation company founded by Kenji Horikawa has been around for 20 years, and this collection celebrates that anniversary.

P.A. Works (aka Progressive Animation Works) is probably a lot more underrated and obscure than it deserves to be. The studio’s animation is generally quite good, but it has never produced any mega-hits. There are no cash cows in its library: no Demon Slayer or Jujutsu Kaisen; no Naruto or One Piece; no Evangelion. (However, its animators have done in-between animation for series more famous than its own, ranging from Attack on Titan and My Hero Academia to Soul Eater.)

Despite that apparent weakness, that does not mean that its library is bad. The series are just not as well-known as the heavyweights in the industry.

That said, I highly enjoyed the unusual and unique Angel Beats! when it came out. P.A. Works also animated Hanasaku Iroha, SHIROBAKO, Appare-Ranman!, and the first season of Uma Musume: Pretty Derby. (Uma Musume is not represented in this collection.)

What’s In the P.A.Works Collection

This collection will include five opening and closing themes just from the anime production comedy SHIROBAKO. Another five will come from the romantic comedy Hanasaku Iroha. Country tourism office/ slice-of-life comedy Sakura Quest donated another four. And then there’s Lia’s lovely piano theme, ‘My Soul, Your Beats!’ from Angel Beats! With 58 songs from multiple artists. There’s bound to be something you like.

Incidentally, the 58th song in this collection is a bonus track. It’s not from any series. Instead, the song ‘Utopia’ is the theme from the True Tears x Hanasaku Iroha x Tari Tari Joint Festival. This was a crossover event between the three series. Cleverly, the song features one singer (Riya from Eufonius, Kimiko from nano.RIPE, and AiRI) from each series. Essentially, the crossover event had a crossover theme song.