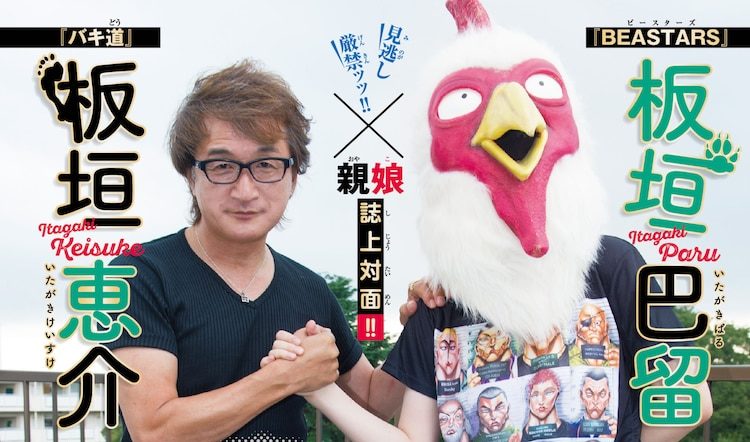 Paru Itagaki and Keisuke Itagaki have revealed that they are indeed father and daughter, after much speculation and many rumors.

The revelation came in an interview between the BEASTARS and Baki authors published in this week’s issue no. 42 of Weekly Shonen Champion, which carried the tagline ‘father and daughter discussion.’ In the interview, Paru Itagaki and Keisuke Itagaki revealed that they are indeed father and daughter, explaining why they didn’t reveal their familial relationship until now, as well as some of the advice that Keisuke gave Paru when she first started out as a mangaka.

Former Weekly Shonen Champion editor-in-chief Takafumi Sawa also attended the interview, telling the story of Paru’s debut back in 2016. As it turns out, Takafumi served as editor for both Paru and Keisuke Itagaki during his tenure at Akita Shoten – a rare accolade that more than merits his inclusion.

That being said, there were always whispers that Paru Itagaki’s father was indeed Baki author Keisuke Itagaki, but neither mangaka saw fit to reveal the truth until now. Why?

Paru Itagaki’s concern for her privacy is already apparent from the fact that she wears a giant chicken mask for all public appearances, which is definitely warranted given the fact that her series BEASTARS has now become one of the pillars of Weekly Shonen Champion.

Perhaps there were also fears of nepotism accusations from both mangaka if Paru Itagaki revealed the identity of her father, as they are both published in Weekly Shonen Champion alongside one another.

Despite their efforts, however, the fact that Paru Itagaki’s father was Keisuke Itagaki was already an accepted fact in the manga community. If their common name was the first hint, then similarities between their art styles, particularly when it comes to intensely detailed anatomy, made it even more obvious.

Japanese tabloids then ran with this assumption back in 2018, which the prestigious French news outlet Le Monde also then reported as fact earlier this year during their write-up on the first volume of BEASTARS – all this despite the fact that no official statement had ever been made.

So, to a certain extent, Paru Itagaki revealing the identity of her father, Keisuke Itagaki, was already a foregone conclusion. Still, the fact that she has a new autobiographical manga in Kodansha’s Kiss magazine starting soon perhaps meant that now was finally the time to come clean.

None of this has any bearing on the works of either author, but it is interesting to see the enduring mystery of Paru Itagaki’s father put to rest. The Weekly Shonen Champion interview also promises more discussions between the father-daughter pair in the future, so don’t expect this dynamic to go away any time soon!