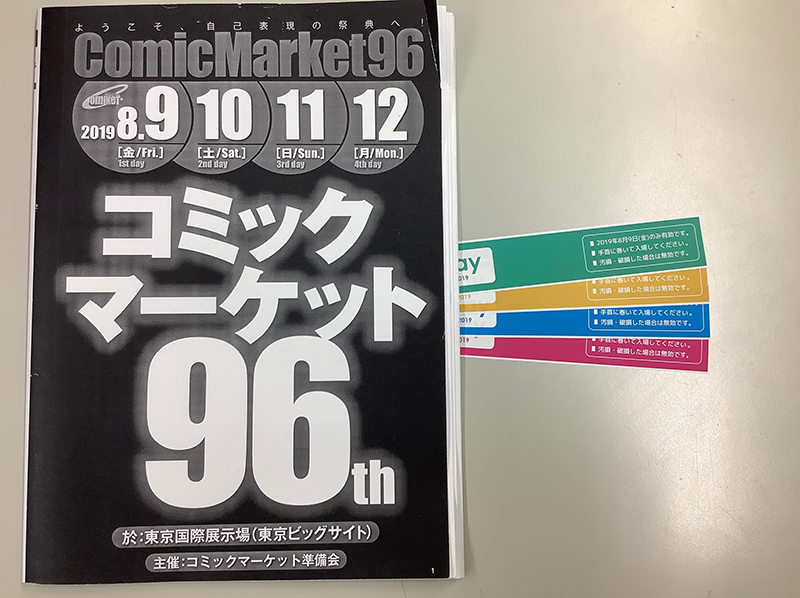 The changes coming to Comiket, the world’s largest doujinshi event, have necessitated some serious discussion on how the event will be run going forward. One important discussion was that around introducing an admission fee to the otherwise free event, which has finally been confirmed for this summer’s Comiket 96.

Attendees to this summer’s Comiket 96 will now need to purchase wristbands for each of the four days they wish to attend the event on, with each wristband being a different color for each day. When entering either of the two venues in use this year, staff will verify that you have both bought a wristband and that it is the correct color for the correct day.

Comiket staff are urging attendees to buy Comiket 96 wristbands beforehand if they can, but it is quite strange that the wristbands are actually more expensive if bought in advance than on the day. Buying one of the wristbands at the event will come to 500 yen, whereas buying one at participating stores will cost you 540 yen.

Those wishing to buy four wristbands for all four days will, however, be more attracted to buying the catalog, as this year’s Comiket 96 catalog will come with four wristbands for the price of 2500 yen at participating stores, along with the regular information on doujinshi circles and industry booths.

Once more, however, it’s actually cheaper to buy the Comiket 96 catalog on the day of the event itself, for a lower price of 2000 yen. Furthermore, the wristbands are only attached to the regular, paper catalog and not to the DVD-ROM catalog, nor the digital version via Comiket’s official website.

While it’s quite obvious why the paper Comiket 96 wristbands don’t come with the digital catalog, the fact that they don’t come with the DVD-ROM catalog is quite annoying – it’s by far the most convenient option, allowing you to download a map of the circles and other relevant information onto your smartphone.

Apparently, this is because the DVD-ROM catalog is actually made by a separate company, who assumedly weren’t able to accommodate the sudden change in policy. Given time, however, I’m sure that they wouldn’t have been able to include the wristbands with their catalog – further underscoring my suspicion that this patchy provision is due to a hasty, last-minute decision on the part of the organizers.

If the Comiket organizers want to seriously address the problems of higher attendance, congestion as well as fewer doujinshi sales that will come with the changes to the event, then they need to be a lot more thoughtful and organized than this.

Almost no one has a problem with paying admission to get into the event, but the problem comes with how you implement this admission. Do it right, and you’ll be able to offset the coming problems and secure a bright future for the event. But do it wrong, and you might end up on the wrong side of fans.

For more information regarding the wristbands now necessary for Comiket 96, which is taking place from August 9 to August 12 this year in Odaiba, check out the official website.