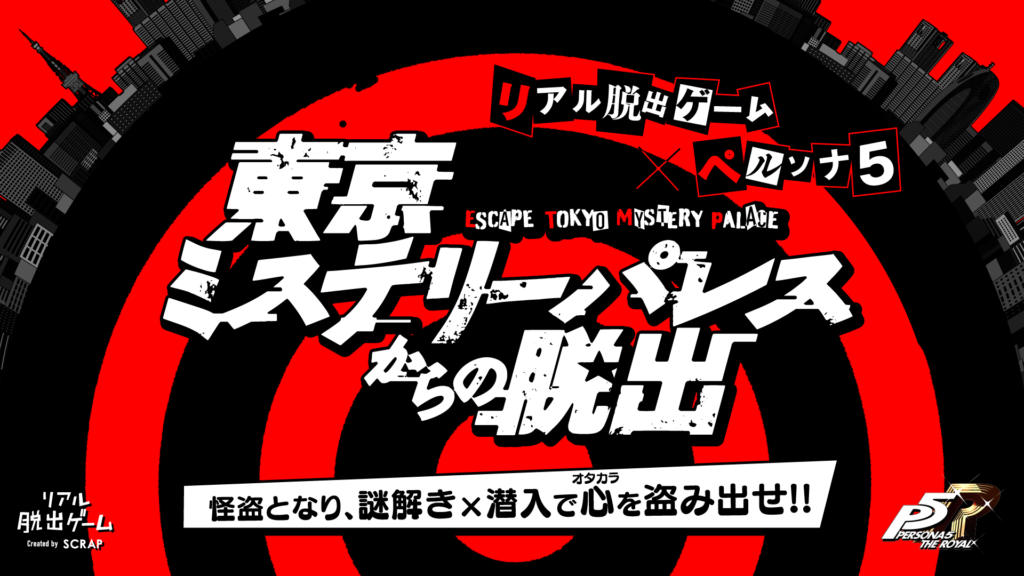 Atlus finally unveiled the mysterious ‘P5S’ project over the weekend, revealing that it would be a Musou game based on their worldwide smash hit Persona 5 titled Persona 5 Scramble: The Phantom Strikers. While this announcement wasn’t exactly greeted with enthusiasm, especially not from those holding out for a Persona 5 Switch port, this new title has set off a new wave of collaborations and special promotional projects in turn – one of which is a new Persona 5 escape room, set to open its doors this July.

SCRAP will be organizing and running the new escape room, which is titled ‘Escape From Mystery Tokyo Palace.’ You might remember SCRAP as the organizers behind the Hunter x Hunter and The Promised Neverland escape rooms that opened their doors earlier this year. Their permanent ‘Tokyo Mystery Circus’ installation in Shinjuku has allowed them to pump out high quality themed escape rooms on a consistent and regular basis, so to see them tackling something as high profile as the Persona 5 series is exciting news indeed.

Details available on the escape room’s official website show that SCRAP is paying close attention to the appeal and gameplay of the original Persona 5 game in designing the escape room. Before starting, participants will assume the role of a character from the Persona 5 cast to tackle the mystery as. Participants will then have to ‘infiltrate’ the escape room before solving it and capturing the heart of a rotten adult, all while being pursued by Shadows – just like the Phantom Thieves in the highly popular Persona 5 game.

It seems like SCRAP are attempting to marry their espionage-focused rooms – one key example being their Metal Gear Solid escape room – with the more traditional escape room formula this time around, and this totally makes sense given the gameplay of Persona 5. This focus on not only crafting high-quality experiences but also on crafting experiences that perfectly match the material they are based on is exactly why SCRAP have seen so much success in the past couple of years. I’m truly glad that a company like SCRAP have been given the opportunity to craft an experience based on such an excellent property, and I can’t wait to check this escape room out.

Tickets go on sale for the Persona 5 escape room on May 11, with the room itself open for business from July 25 to November 4. Those who purchase the special tickets (6400 yen) will get access to a special section on the official website with various activities, as well as some exclusive merch. A normal ticket will otherwise cost you 3900 yen on the door, or 3500 if you book online beforehand. For more information on tickets as well as the location, please refer to the official website.