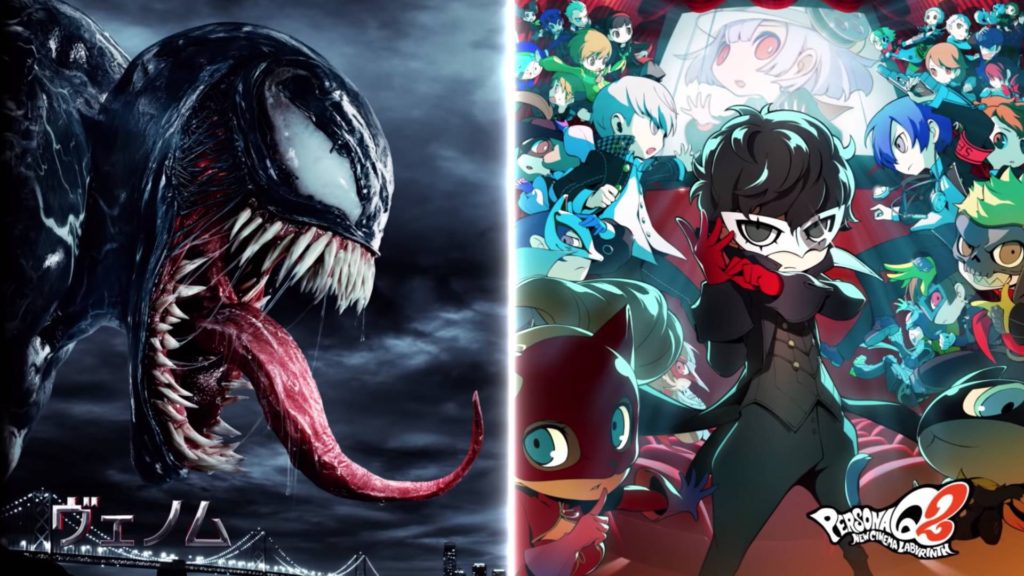 With Marvel properties having already taken firm hold of popular culture in the West, we’ve been seeing a big marketing push in recent years for the live-action Marvel movies that get a release in Japan, as the various companies behind the films seek to extend their influence beyond the English-speaking countries of the world. And what better way to do so than by having some already beloved characters and series do the promotion for you?
Sony’s Venom is the latest movie to do just this, following in the footsteps of an Avengers: Infinity War x My Hero Academia crossover earlier this year, by joining forces with Atlus’ incredibly successful Persona series. Two promotional videos featuring Theodore of Persona 3 and Joker/Ren Amamiya of Persona 5 explaining what the movie is about have been shared ahead of Venom’s November 2 Japanese release, and you check them out below:

Although such a collaboration sounds silly at first, it’s a pretty smart move by Sony when you consider that the older audience that the Persona series attracts is exactly the type of people they want to come and watch their “dark action” superhero film. Furthermore, as the voice of Jun Fukuyama as Joker actually states in the trailer, there’s a lot that the Phantom Thieves share with the symbiote Venom – they both serve justice in a way that’s outside of the law, in such a way that could be considered “evil” by some.

Venom has been doing extremely well in the West so far, something nobody predicted given the poor response from critics, and it looks as though Sony is keen to replicate that success in Japan. Indeed, the Japanese marketing for the movie firmly pushes the character of Venom as “Spider-Man’s arch nemesis,” something which has been left unsaid in much of the English-language marketing due to legal reasons. Again, this is a smart move by Sony, as Spider-Man properties have always done well in Japan, with there even being a tokusatsu Spider-Man series back in the 1970s.

Collaborating with such a massively successful movie has been humbling for even the gigantic Persona series, whose latest mainline entry Persona 5 recently topped over 2.2 million sales worldwide. Attached to PV were comments from the voice actors for both Theodore and Joker, and Jun Fukuyama (Joker) was quick to say that he “never imagined that an anime like Persona 5 would be collaborating with such a worldwide hit as Venom…”.

What kind of an effect the film’s collaboration with Persona remains to be seen, but it does represent a serious effort on the Western studios’ part to push the latest western trend of live-action superhero movies into Japan. Let’s just hope their efforts don’t fail, much like a turd in the wind.