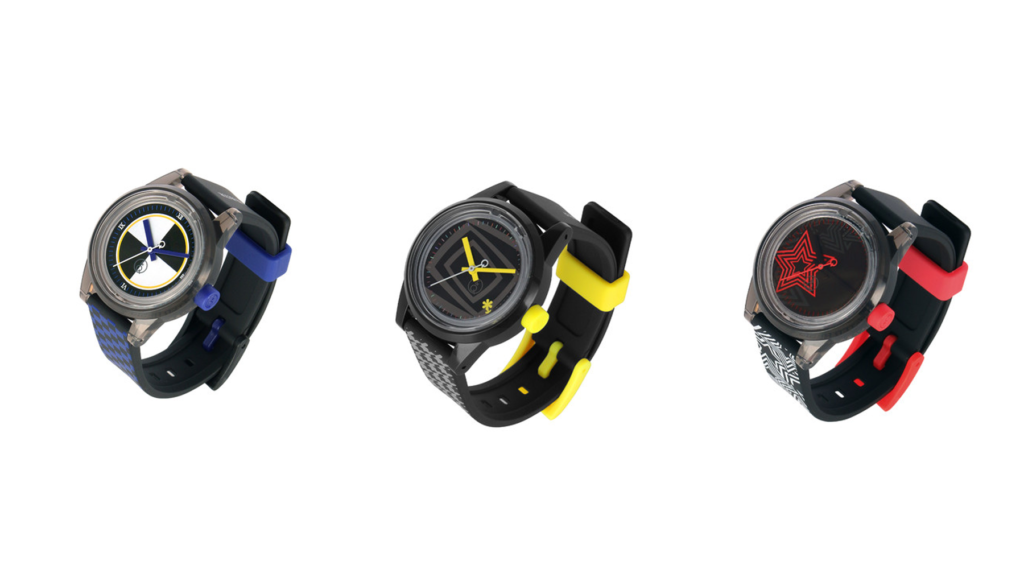 On the very last day of August 2020, anime and game merch hawker AMNIBUS unveiled a trilogy of triumphant and thoughtfully designed Persona Sukejans, transforming the unique particulars of 3, 4, and 5’s respective aesthetics into clothing for your body! If you had opted to spend 230 of your labored-for dollars (honestly, on the affordable end as far as Sukejans go) you could consider pairing whichever jacket you got with one of these Persona watches designed by Q & Q SmileSolar. It will tighten up your entire Atlus inspired visual extravagance. Doing so, you too can be a JRPG ‘protag’.

Each available to you for a palindromic 8,778 yen, your choice of Persona Watches slightly differ in a few key ways between the Persona 3, the Persona 4, and the Persona 5 variety. Of course, some bits get each games’ color-wash, blue, yellow, and red respectively, but the differences are more meaningful than just the adorning paint. The face-plates offer the biggest notable distinction, with imagery taken from each game staring you down as you try to figure out the time. Most enjoyably, in our opinion, are the English phrases found on the straps which also pull from each game; we all need a watch that says ‘You’re Myself, I’m Yourself.’ lest we forget we’ve already turned into Evangelion tang.

We love the fact that anytime Persona merchandise such as Persona watches and Persona jackets manifest themselves, Persona 3 and Persona 4 are always included, despite the games being well over a decade old. In an ideal world, we’d see more representation of Persona 1 and Persona 2 and the other Persona 2 more often, but at least these two Playstation 2 era RPGs are still with us in some form today, one playable on PC! With one of the most distinct visual languages around the proverbial JRPG town, Persona lends itself to its own merchandise. Less figures and vaguer representations of things we like that we can carry with us, please.

You can preorder some Persona watches here.