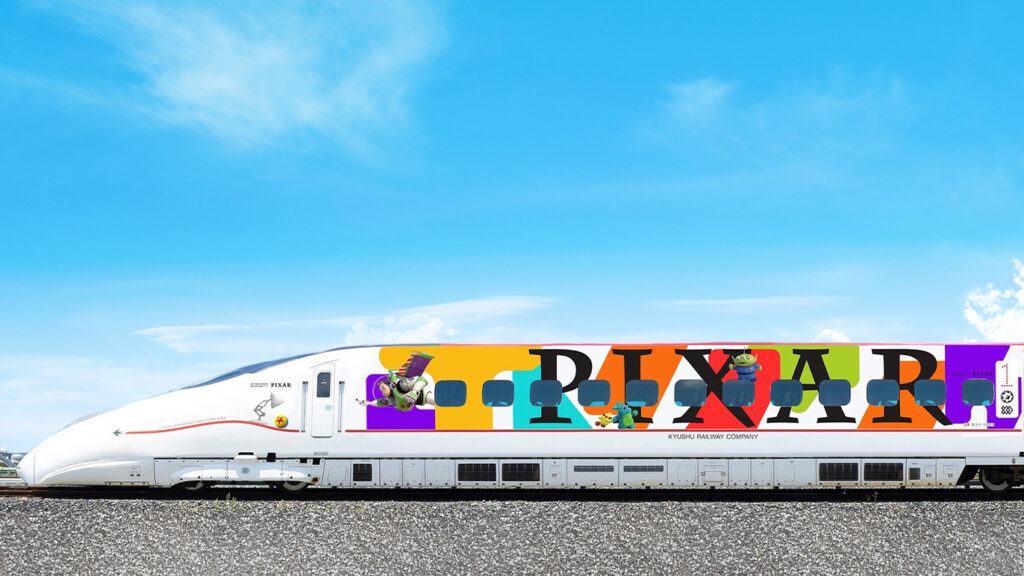 The Go! Waku Waku Adventure with Pixar Shinkansen will run from Hakata to Kagoshima-Chuo Station via Kumamoto.

Judging from the illustrations put out by JR Kyushu, the Pixar train will certainly be a colorful one.

Pixar mascot Luxo Jr. will be near the nose of the train, followed by Buzz Lightyear, who is falling with style.  Bunny and Ducky, and one of the Little Green Men will ride the train behind Buzz.  Woody and Jessie will ride Bullseye all the way across Kyushu.

All of this Toy Story fun happens against a background of purple, yellow, blue, orange, red, and green shapes.

In case there was any doubt, the train also says Pixar across the side.

The train will contain more Pixar stuff inside. Various characters from Pixar movies — Toy Story of course, but also Wall-E, Finding Nemo, Monsters, Inc., and others — will be featured on the seats.  Each seat will have headrests decorated in that same, wild rainbow color scheme as the exterior.

If you’re lucky enough to get a seat on the first train, you will receive a Pixar commemorative boarding certificate and a flag.  Pixar goods will also be sold on the train.

If you miss the first train, you’ll still have plenty of other chances to ride. The train will operate from Sept. 12 through May 2021. A schedule should go up on the Go! Waku Waku Adventure with Pixar website soon.

According to JR Kyushu, they will also sell Pixar items at various stations. (So far, they haven’t said precisely what or where.)

The train is a six-car Kyushu Shinkansen Series 800, which typically runs Tsubame service.

Coincidentally, the Fukuoka City Museum currently has The Science Behind Pixar exhibition  through Sept. 22.

The exhibition uses interactive exhibits to demonstrate the scientific concepts behind Pixar’s films.