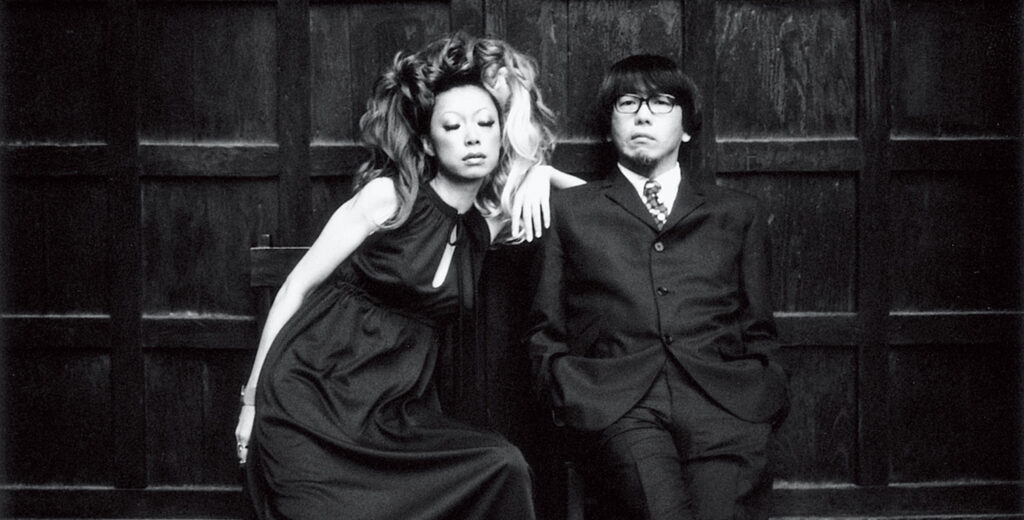 Pizzicato Five is kind of a misnomer, since there were barely five members at the beginning and two at the end of their run, but they maintain the energy and fun of a five-man band.

Pizzicato Five might not be the most well-known groups, but it’s undoubtedly an essential part of the multi-threaded fabric of J-Pop as we know it today. From the upbeat sounds of the sixties to the cooler sounds of jazz, it’s exactly the kind of kitschy, funky, and upbeat mix you’d expect from one of the leading groups of Shibuya-kei.

Pizzicato Five originally formed in 1985 after meeting at a local music Society conference at their university. The group originally consisted of Yasuharu Konishi, Keitarou Takanami, Ryo Kamomiya, Mamiko Sasaki, and Shigeo Miyata, but the number of members eventually dwindled down until Konishi was the only remaining founding member.

They got their big break in 1986 when they signed with what is now Sony Music Entertainment Japan and released their first album in 1987. However, it didn’t do very well and they were advised to change things up in a major way or quit altogether.

Pizzicato Five then recruited Takao Tajima, the lead singer of Original Love, as a new vocalist and released their second album, Bellissima! In 1988. The next two albums weren’t doing much for them, or anyone else for that matter, as they failed pretty hard, doing disastrously on the charts.

Finally, Maki Nomiya was brought in to save their rapidly sinking ship in 1990, recruited after the success of her solo album as the lead vocalist of Portable Rock, a new wave band. Takao Tajima bowed out and returned to his “Original Love.”

Pizzicato Five then switched from releasing albums to EPs, this time with Maki Nomiya at the helm vocally, and they got on to sampling music which helped jumpstart the Shibuya Kei movement.

The 90s showed a huge turn around for Pizzicato Five, especially once they started to do theme songs for television dramas, and their 1993 single Sweet Soul Revue catapulted them into the public awareness. And it’s no wonder, with a catchy chorus and an overall feel-good sound interspersed with lyrics about falling in love. Bossa Nova 2001, somewhat ironically named 2001 would be the year they disbanded, dropped in June 1993 and is on record as their highest-charting album to date.

Overdose (1994) was their second best selling album of all time in Japan, charting at number 7. It also possessed some of their highest charting singles, like The Night is Still Young, a chill house number that evokes the 90s for most people, Happy Sad – a jazzy song that pays heavy homage to Hugh Masekela’s Grazing in the Grass, and Superstar, a more rock-driven piece that retains that classic Shibuya Kei sound.

Pizzicato Five also managed to make the charts in 1996 with Baby Portable Rock, a song relying heavy on the kitsch, but still upbeat, happy, yet somewhat relaxed. The visuals in the video for Baby Portable Rock heavily evoke the 60s in terms of fashion and aesthetic, something Pizzicato Five maintained through much of their career.

Emboldened by their success in Japan, Pizzicato Five eventually released an extended play in America in 1994, Five by Five. It contained a full English language remix of their song, Baby Love Child, which retained its Shibuya-kei sound, but with a bit more of a 90s hip hop feel.

After that, Pizzicato Five followed that up with a full album, Made in USA (a play on words about the town Usa in Oita prefecture in Japan), which was a Best-Of compilation of their successful Japanese tracks, including the 1993 hit Sweet Soul Revue, neatly compiled for American consumption.

Sadly, it would seem that the 90s was the golden age for the band, after releasing a few more albums and EPS, the band disbanded in 2001. Maki Nomiya went on to focus on her own projects, eventually providing music for the vocals for the Katamari Damacy Series in 2008, and releasing music as recently as 2017. Yasuharu Konishi went on to produce and arrange and compose and remix for several different artists, including Puffy AmiYumi and SMAP.