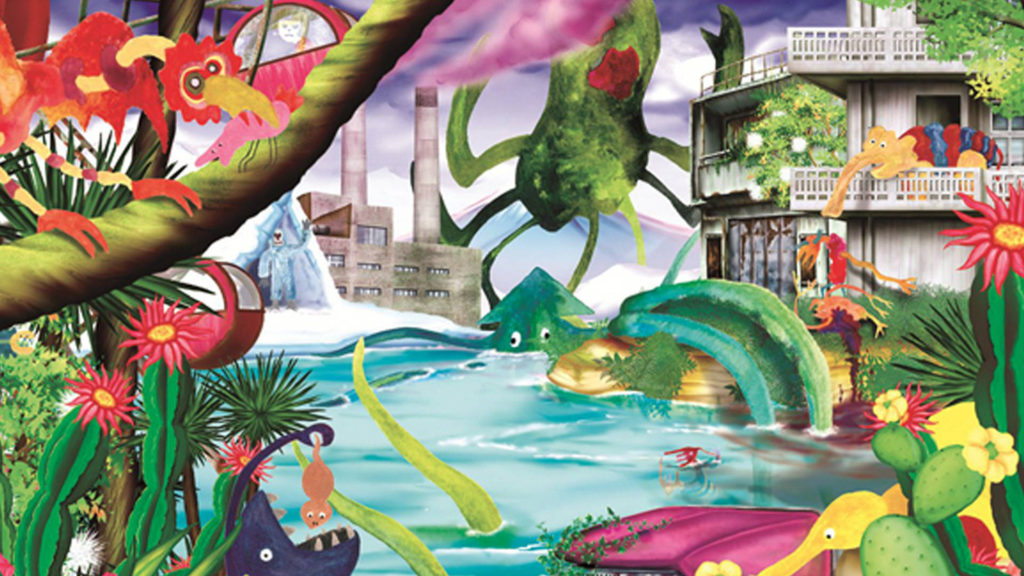 If there’s any two things that the Tokyo Summer season brings, it’s rain and humidity. The season’s quite honestly a hot mess, and it’s got few redeeming factors outside of the incredible music that it brings forth. I don’t know, I’m sure something about the blistering heat is enough to inspire anyone to stay inside and produce, right? This week, we’ll be taking a look at a few tracks that have been on repeat for a while, and also happen to perfectly fit this weeks forecast. You see, there’s no one label that could describe this week better than frantic, and our second entry into the playlist.// series aims to reflect that.

Joining the playlist this week are six new acts, all crossing the borders into a variety of genres. From the math rock sounds of Kyoto’s own tricot all the way to the sugar sweet sounds of Tomggg and Antenna Girl, this week has a lot going for it. So without further ado, let’s look into this weeks playlist.//:

Quite possibly one of Japan’s quirkiest musical acts as of right now, the talented beyond belief three-piece electronic group Wednesday Campanella take this weeks crown. Their hit-track ‘Unico’, stemming from the groups 2016 album UMA, has finally received it’s own music video, thus thrusting it back into the limelight. The actual song, which kicks in at about the 45 second mark, is accompanied by an entrancing video of group member KOM_I running about the streets totally enchanted by the rhythm. The song on it’s own already made for an alluring adventure, but coupled with it’s music video this is only amplified.

Quite possibly one of Japan’s fastest growing acts internationally, tricot are an emotionally powerful math rock trio stemming from Kyoto, Japan. Released May 17, the band’s 3rd album carefully builds on the three members visual and lyrical identity. This is especially prevalent in the closing track ‘Melon Soda’, accompanied by it’s gorgeously executed music video directed by Mani Kato. Though it’s probably not for everyone, there’s absolutely no denying the talent of tricot as they continue to reach new heights both domestically and internationally.

If you checked out last seasons surprise hit Miss Kobayashi’s Dragon Maid, you’ve definitely heard of Japanese outfit fhána. The group were responsible for the anime’s over-the-top opening theme song, ‘Rhaspody of Blue Sky’, and have since gone on to do a nationwide tour of Japan and announce a third album. It really does seem like there’s no stopping them, and their latest music video for ‘Relief’ only further solidifies this fact. Utilizing completely English lyrics, the song stands as proof of the bands diverse talent pool.

Let’s talk about Happy Kuru Kuru for a little, with a special focus on their latest track ‘Magical Girl’. Much like last weeks CY8ER, Happy Kuru Kuru is a Yunomi-produced idol unit stemming from Tokyo, Japan. What makes this unit so different however is the duo’s much harder-hitting production and increasingly more eccentric vocals. Each of their releases packs a massive punch, and Magical Girl is absolutely no exception. It’s bouncy-theme will have you moving up and down for the whole day, with a guarantee that the track is going to get stuck in your head.

Quite possibly the perfect accompaniment to the upcoming rainy days, Tomggg has teamed up with fellow artist Antenna Girl for their latest release, ‘SUPERSTAR’. The best way to describe both musicians sounds would be the search for beauty in delicacy. Coupling Antenna Girl’s soft vocals with Tomggg’s carefree production, we’re presented with a calming journey that embodies both creatives unique and compelling styles.

Speaking of all these Yunomi-produced idol units, it’s probably about time we actually present one of his own works, or at least one of the many remixes he’s created. Ojisan is the debut single from emerging idol group YOANI 1年C組 which was totally flipped on it’s head in this Yunomi remix. By combining his frantic production style with the somewhat hilarious lyrics of the original track, we’re graced with this incredible piece of art.

If you’re interested in checking out prior entries into our ongoing playlist.// series, you’ll find them here.