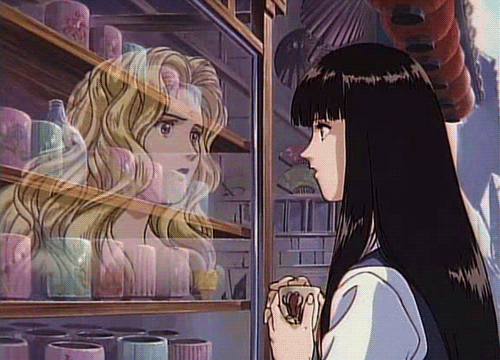 Please Save My Earth (ぼくの地球を守って) is a 1987 sci-fi-drama shoujo manga by Saki Hiwatari set in Tokyo.

It follows the life of six teens and a child who all have the strangest thing in common – since they were young, they’ve had dreams that feel more like memories of being part of a group of alien scientists who observe the earth while stationed on the moon.

Turns out, they are memories –  memories from their previous lives of their incarnations who wanted to visit Earth so badly they reincarnated as Earthlings.

The story unravels at a slow pace, becoming more complex with each layer peeled away. It almost plays like a murder mystery, especially since we learn that there was indeed some level of foul play.

Just when she’s about to write it off, she overhears two of her classmates, Jinpachi and Issei (known as Gyokuran and Enju in their past incarnations), talking about similar dreams they’ve had. Later, the two boys reveal they’ve had the ‘moon dreams’ since middle school, and recently found out they were actually lovers in their past lives. 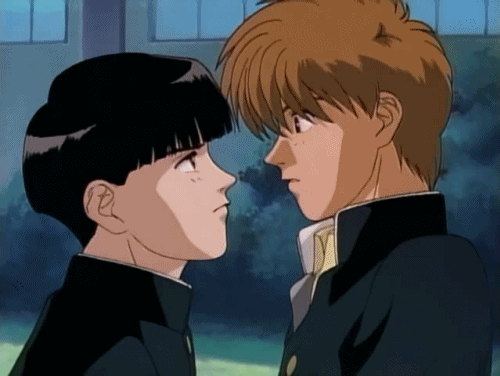 The three of them later find some of the other scientists by putting a want ad in an occult magazine – Daisuke and Sakura (or Hiiragi and Shusuran, respectively). Later on, a sickly boy named Haruhiko joins the cast, seeming to have harnessed most of his power compared to the others. Alice and her friends meet up frequently to help work through the mystery of their previous lives.

As if that weren’t enough, Alice also has to deal with being endlessly terrorized and pranked by resident brat-in-charge neighbor Rin Kobayashi, a 7-year-old who Alice sometimes has to babysit. He also appears to be weirdly in love with her, asking her cryptic questions about the past and future. 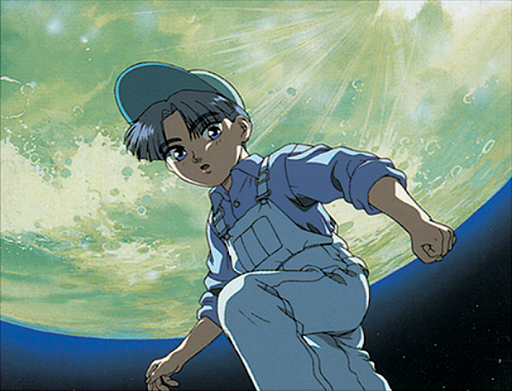 One day while Alice’s care, Rin ends up falling off an apartment balcony, something Alice feels terribly guilty for. He survives, but his personality undergoes a huge shift into malevolency and he begins to exhibit psychic abilities like telekinesis, flying, and more.

Despite Alice being the main character through which we’re thrown into this world, Rin’s actions drive the plot, as he engages in behind-the-scenes machinations, intimidations, and manipulation to the end of his past life incarnation’s desires.

At the heart of the conflict of the story is the struggle between reconciling the memories and desires of their past lives with their current incarnations.

Having been lovers in a past life, Issei (as Enju) struggles with his feelings for Jinpachi (as Gyokuran).

Rin secretly terrorizes Haruhiko with knowledge of his past life misdeeds and uses this to attempt to manipulate him into giving him information that will help him use Tokyo Tower to communicate with the moon base.

The OVA gives us a brief, albeit vivid glimpse into Rin’s painful backstory as his past life – which consists of child abandonment, war, and murder. After being taken in by an orphanage, he’s adopted by a kind man, and just as Shion begins to trust him, his foster father dies in an accident. Not a great start for the kid.

Despite the title, there aren’t quite as many environmental messages as you’d expect. The main character has a tie to plants and nature and comments on the pollution in the city (as opposed to her native countryside) in the beginning, but is this probably to draw more attention to her past life’s inclinations and impressions. Mokuren also had a connection with nature and worked as the team biologist.

Influences and Effects on the Real World

Many have noted the plot similarities to Sailor Moon, and Naoko Takeuchi is widely thought to have taken inspiration for Sailor Moon from this series.

It’s also worth mentioning that, maybe somewhat predictably, Saki Hiwatari received droves of letters from fans claiming to be reincarnations of aliens who lived on the moon base.

Halfway through the series or so, she started including a “This is a Work of Fiction” disclaimer to dissuade people from becoming too wrapped up in the story.

Where to Watch Please Save My Earth, Sequels, Spin-offs and More

The manga originally ran in Hana to Yume shoujo magazine from 1987- 1994 and experienced a dramatic shift in visual style throughout the run. The entire manga series is available for purchase on VIZ media’s website – all 21 volumes worth.

There’s also a sequel series, Embraced by the Moonlight, that deals with the lives of Rin and Alice and their son, and yes, even more reincarnation strangeness.

There was a six-episode original video animation (OVA) series produced by Production I.G. studios that covers up to about volume 9 of the manga, but it is no longer in circulation. The episodes themselves can be found if you search hard enough, should your interest be piqued enough.