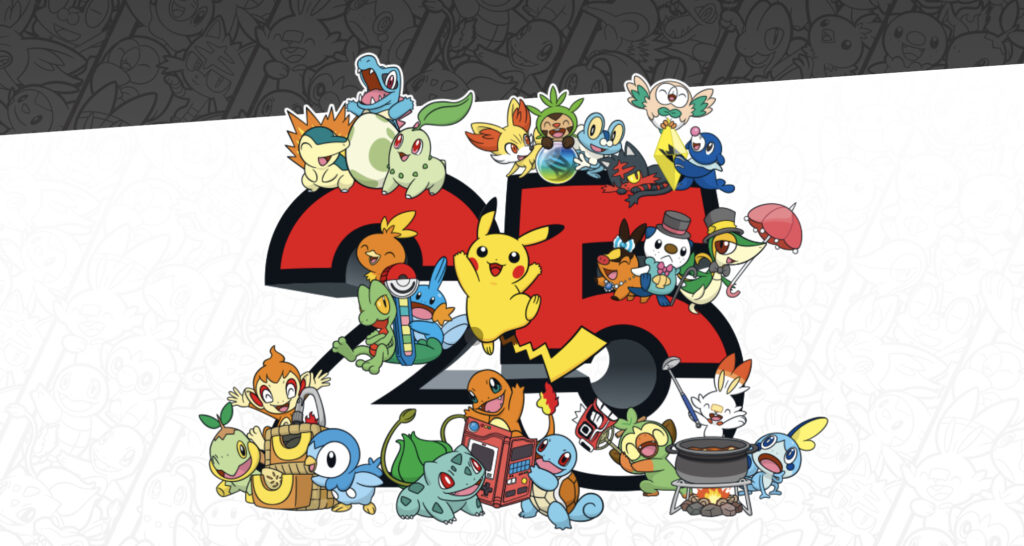 The Pokémon franchise reaches its 25th anniversary in 2021, and plans to celebrate this momentous occasion with new Pokémon TCG sets, new merchandise, music from artists like Katy Perry, and more!

With the first Pokémon games that launched this worldwide phenomenon releasing for the Game Boy in 1996, this year marks the grand quarter-century since the start of the franchise. The Pokémon Company chose to mark this occasion in style, announcing a slew of collaborations and merchandise that kicks off with a video showcasing a retrospective journey through the Pokémon universe, created with dominos made out of old cartridges, merchandise and a whole lot of heart.

Marking the celebrations are a number of exciting upcoming releases. We have news of a brand new TCG Pokémon set that harkens back to the original cards that introduced the card game to millions set to hit store shelves later this year. The designs of Pokémon cards and the artwork associated with them has changed a lot over the years, but this set looks to bring back fan favorites from the original sets.

Hope your binders are ready for the special 25th anniversary-themed collections coming to the #PokemonTCG this year, Trainers! #Pokemon25 pic.twitter.com/CXRHCa02KE

While the Pokémon card game never really dropped in popularity over the time it’s been in circulation, it would be fair to note that the TCG has recently seen a resurgence in the public spotlight. Sealed boxes of the original set and the ultra-rare Charizard card found within it have rocketed in value and routinely sell for thousands of dollars today, while pack openings on YouTube have shot up in views. There’s a renewed excitement to the card game and bringing back classic cards in this manner will only further fuel that.

You can’t have a party without a playlist! Right, @katyperry?

Finally, and perhaps most strange of all, is the planned musical collaboration. Every party needs a playlist, or so they say, so Pokémon has partnered with Universal Music Group to bring together an as-yet-unannounced selection of up-and-coming and popular artists to create music for and about the Pokémon anniversary. We do, however, know who will headline it: the one and only Katy Perry.

The Pokémon Company’s plans for the franchise’s 25th anniversary are varied and vast, and this ignores merchandise like the already-announced Bear Walker skateboard and more potential unannounced plans, and the inevitable gaming releases that will coincide with it (could we learn more about New Pokémon Snap?). You can find out more about the plans over on the official 25th Anniversary website.