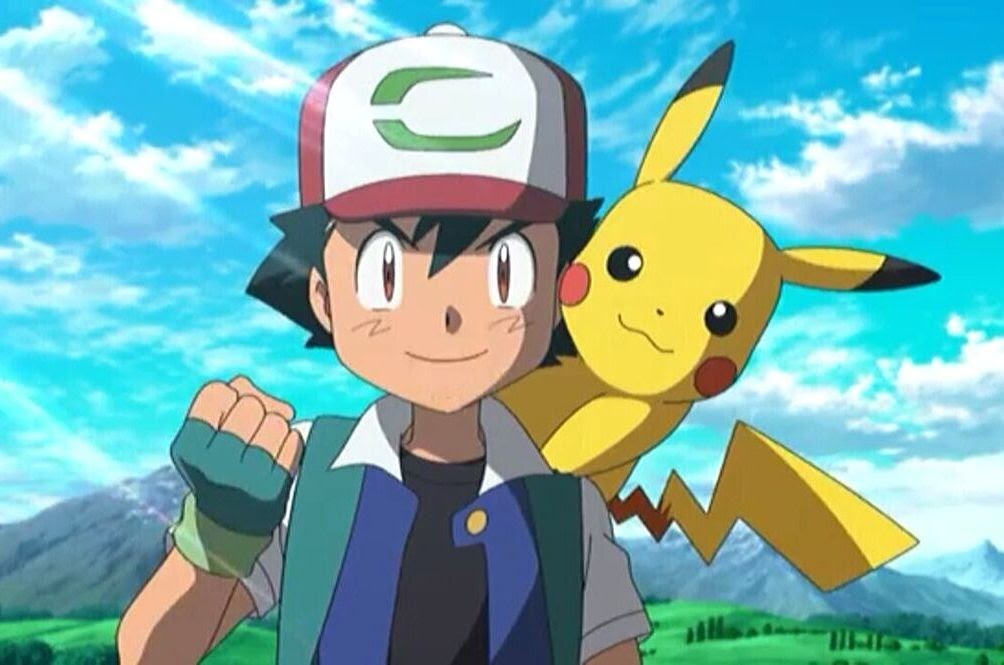 Pokémon is a juggernaut of Japanese pop culture.

Since 1996, there have been trading card games, video games, a mobile game, anime and manga, movies, a musical stage show, and even a theme park or two.

Since a complete list of Pokémon media would take forever, this article will concentrate on the anime — from the original to the current series, which includes the Galar region from Pokémon Sword and Shield.

And even that list is going to be pretty long.

Welcome to the World of Pokémon

Of course, the anime makes more sense if you know something about the Pokémon franchise as a whole.  The basic idea is based on a very old children’s hobby — collecting bugs.

Pokémon video game creator Satoshi Tajiri liked to collect insects as a boy. He created a game that can imitate that fun in an urban setting.

Naturally, that’s what the characters in the Pokémon anime do as well. 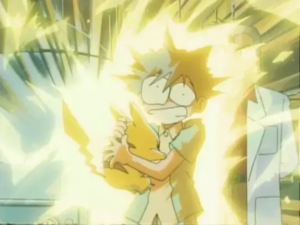 The anime began in 1997.  The first season was just called Pokémon. It takes place in the Kanto region. (Kanto shares a name with the Tokyo area, and many regions have a real-life counterpart.)

The 1997 series is also called Indigo League to distinguish it from later series.  In the first season, we meet iconic Pokémon characters Ash Ketchum and his cute but feisty Pikachu.

At first, 10-year-old Ash (a.k.a. Satoshi) is kind of a ditz.  His own Pikachu doesn’t like him, and tries to fry him.  Ash doesn’t really know much about the world of Pokémon.

Of course, this is great for a novice Pokémon fan. The audience can learn while Ash learns. In the beginning, the anime is sort of an animated tutorial for how to play Pokémon.

These early-season episodes set up a lot of running gags for the whole Pokémon universe.  For example, Misty’s bicycle gets destroyed. Later on in the series, this will also happen to May and Dawn.

We also meet Nurse Joy and Officer Jenny (the first of many).  We also learn that Brock likes both of them. 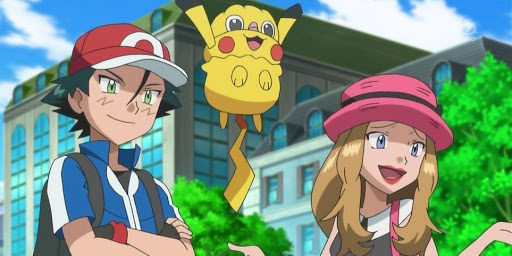 We also meet Jessie and James of Team Rocket for the first time in season one.  It doesn’t take long for them to be defeated and “blast off” again.

Sometimes, Jessie, James, and Meowth can be pretty dumb. Their schemes and disguises range from pretty good to ridiculous. Sometimes the disguises are paper-thin (not even a wig to cover Jessie’s distinctive hair); sometimes they can impersonate people.

For some reason, James crossdresses a lot, but so has Ash (in at least five episodes).

Despite constant losses (with a few exceptions), Jessie and James never give up.

They also have one of the few Pokémon who can speak human language, Meowth.  (They have other Pokémon as well, but Meowth seems to be the evil equivalent to Pikachu.)

Interestingly, Jessie and James may be Ash’s most reliable, constant and “loyal” companions.

Misty, Brock, May, Max, Dawn, and others all come and go during various seasons. But Team Rocket follows Ash around from region to region. Ash and Team Rocket even have temporary truces from time to time to solve common, shared problems.

(Note: There are other members of Team Rocket, such as Butch and Cassidy. But throughout the franchise, any reference to “Team Rocket” usually means the Jessie, James, and Meowth trio.)

A Pokémon for Every Season

The basic premise of the anime is pretty simple — Ash travels around and meets people and their interesting Pokémon. Ash fights various gym leaders and receives badges. Pokémon get stronger and evolve.

There are problems to solve, and valuable lessons to be learned.   There are also rival trainers to fight.  Ash’s ultimate goal is usually to catch all of the Pokémon and become a Pokémon Master.

Team Rocket comes up with various schemes to capture Pikachu (or just cause trouble).

This continues on for 23 seasons and hundreds of episodes.

Ash begins his journey with Brock and Misty. He travels through the Kanto region, the Orange Islands, and the Johto region.  At the end of Master Quest, Misty and Brock return to their hometowns. Ash heads off to Hoenn.

May and Max join the team. Ash, May, and Max explore the Hoenn region. There are new bad guys in Hoenn, Team Aqua and Team Magma.  Aqua and Magma are rivals.

Brock returns. Misty pays a couple of visits. Ash and friends travel back to Kanto for tournaments and stuff.

At the end of Battle Frontier, May heads for Johto. Max stays in Hoenn. Brock returns to his gym.

Ash arrives in Sinnoh, Dawn is introduced, Brock returns. Ash, Dawn, and Brock explore Sinnoh. May and Max pay a visit and a new evil organization, Team Galactic, shows up for the first time.

Ash travels to Unova where he is joined by Iris and Cilan while Brock and Dawn have left. A new villain, Team Plasma, shows up. Jessie and James are still around, but they have been promoted.

Ash and his friends visit the Decolore Islands. Ash and Iris head back to Kanto. Ash plans to visit the Kalos region with Alexa.

Ash explores the Kalos region. He is joined by Serena, Clemont, and Bonnie. Team Flare are the new villains.

Serena is a Pokémon Performer. Performers train Pokémon to dance and perform, instead of battle.

Instead of traveling around the Alola region, Ash becomes a student at the Pokémon School. Misty and Brock make appearances.

Pocket Monsters is the current series.  Ash has a new companion, Go. Go could be a reference to the Pokémon Go mobile game. Like a typical Pokémon Go player, Go’s goal is to catch every Pokemon, and he likes to wander around.

There have been three PokéRaps.  All of them were created by 4Kids Entertainment.  The Kanto Pokérap named all 150 of the original Generation I Pokémon, except Mew.  James “D-Train” Williams and Babi Floyd provided the lead vocals.

PokéRap GS, or Johto PokéRap, did the same thing for Generation II, and the Hoenn PokéRap was the Generation III version.

In 2000, the wild and crazy parody musician “Weird Al” Yankovic recorded a Pokémon polka for Pokémon the Movie 2000: The Power of One.  This is similar in style to the pop and rock song polka medleys that “Weird Al” does on all of his albums.

The Pokémon polka is called Polkamon, and it is available on the Pokémon 2000 The Movie Soundtrack. However, “Weird Al” has not included the song on any of his albums, including Squeeze Box: The Complete Works of “Weird Al” Yankovic.  According to reports, he could not get permission to include the song on Squeeze Box.

There have been several Pokémon movies.    Pokémon: The First Movie: Mewtwo Strikes Back came out in Japan in 1998 and in the United States in 1999.   This was followed by Pokémon: The Movie 2000: The Power of One.

Pokémon 3: The Movie: Entei – Spell of the Unown came to the United States in 2001.  Pokémon 4Ever: Celebi – Voice of the Forest came next.  It was followed by Pokémon Heroes: Latios and Latias.

After that, most Pokémon films went straight to video in the United States, or only received a limited theatrical release outside of Asia.

The first Pokémon season (1997) was directed by Kunihiko Yuyama.  Previously, he had directed Wedding Peach, Slayers Return, and episodes of Galaxy Express 999 and Magical Princess Minky Momo, among other things.

The year 1998 was a big year for Pokémon in North America. That year, 4Kids Entertainment brought the anime TV series to the United States, with the first English-language episode airing on Sept. 8. The video game Pokémon Red and Blue also arrived in North America in September.  The trading card game officially arrived a couple of months later in December 1998 — although some kids with Japanese connections would have known about the Japanese version before then.

The Pokémon Center Company was also founded in Japan in 1998. The company was created by trading card company Creatures, video game developer Game Freak and video game giant Nintendo.  Eventually, this company would become The Pokémon Company, and they would be in charge of Pokémon products in general.

The Pokémon Company International (a subsidiary) would take over the anime series from 4Kids Entertainment in 2006.

Pokémon gained a lot of new fans with the introduction of Pokémon Go in 2016. The game was downloaded from app stores more than 500 million times in its first year, and has been downloaded more than one billion times worldwide.

Go is a somewhat unusual addition to the franchise. It was developed and published by Niantic, not Game Freak. The emphasis is on catching and collecting, not battling.  It encourages players to wander around outside while searching for Pokémon.

You can play while connected only to Wi-Fi networks. However, the game’s creators recommend playing while connected to a reliable data network. Compatibility information is available at the Apple iOS app store, the Google Android app store,  or at the Pokémon website.